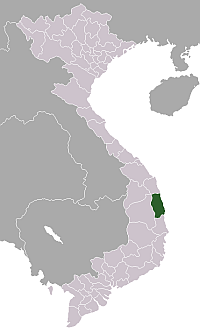 Binh Dinh (in Vietnamese "Bình Định" audio|Binh Dinh.ogg|pronunciation; : ) is a province of . It is located in Vietnam's South Central Coast region.

Bình Định is divided into 1 city (Qui Nhơn) and 10 districts:

Bình Định contains a range of different terrains. The province is generally described as being divided into four clearly-defined regions - the highlands along the western border, the hill country, the plains, and the coast. Most of the population lives near the coast.

The major economic activities of Bình Định province are and . The manufacture of wood products is also significant - Bình Định has traditionally been known for supplying valuable exotic woods.Bình Định will complete Nhon Hoi economic zone in . This is a very good chance to improve the local economy. Bình Định will be a centre of the middle in the future because it has a large port and a lot of advantages to develop industries.

The history of Bình Định province is closely linked to that of the historic Kingdom of , a state based around the who now form the Bình Định's largest minority. Champa occupied most of central Vietnam, and frequently fought wars with the Vietnamese to the north. Gradually, however, the Vietnamese pushed the Cham southwards. In , the Cham were forced to abandon their capital, Mỹ Sơn, and relocate to the city of Vijaya in Bình Định. Vijaya (known to the Vietnamese as Do Ban) remained the capital of Champa for the remainder of the kingdom's existence. In , it was overrun by the Vietnamese. With Bình Định under Vietnamese control, Vietnamese settlers gradually moved southwards, eventually displacing the Cham as the dominant ethnic group of the area. Today, ethnic Vietnamese make up over 95% of Bình Định's population.

A number of towers built by the Cham are now significant tourist attractions in Bình Định. The province's Tây Sơn district is also famous as the starting place of the Tây Sơn Uprising (and thus the Tây Sơn Dynasty). The Quang Trung Museum commemorates the event.

Hero Nguyen Hue or King Quang Trung is an outstanding man in political, military, diplomatic, economic and cultural aspects. He died in at the age of 39.