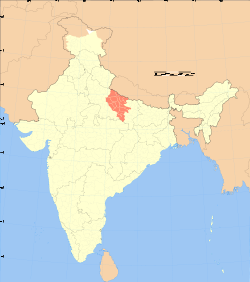 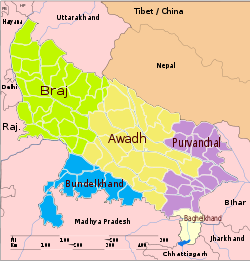 pronunciation (help·info)), also known in various British historical texts as Oudh, Oundh, or Oude derived from Ayodhya, is a region in the centre of the modern Indian state of Uttar Pradesh, which was before independence known as the United Provinces of Agra and Oudh. The traditional capital of Awadh has been Lucknow, the capital of the modern day Uttar Pradesh. The modern definition of Awadh geographically includes the districts of Ambedkar Nagar, Bahraich, Balrampur, Barabanki, Faizabad, Gonda, Hardoi, Lakhimpur Kheri, Lucknow, Pratapgarh, Allahabad, Raebareli, Shravasti, Sitapur, Sultanpur, Unnao and Kanpur. A strip of the northern areas of the region, i.e. parts of Terai area (Inner Terai and Outer Terai), now lies within Nepal (Tulsipur Dang). The region is home to a distinct dialect, Awadhi, spoken by Awadhis.

Awadh's political unity can be traced back to the ancient Hindu kingdom of Kosala, with Ayodhya as its capital. Modern Awadh finds historical mention only in the time of Akbar, in the late 16th century.

From the pre-historic period to the time of Akbar, the limits of the province and its internal divisions seem to have been constantly changing, and the name of Oudh, or Awadh, seems to have been applicable to only one of the ancient divisions or Sarkars, nearly corresponding to old Pachhimrath. The title of Subedar of Awadh is mentioned as early as 1280 A.D., but it can only have denoted the governor of the tract of the country above defined. The Awadh of Akbar was one of the twelve (or fifteen) subahs into which he divided the Mughal Empire as it stood in the year 1590 A.D. As constituted at the end of sixteenth century, the Subah contained five sarkars, viz. Awadh, Lucknow, Bahraich, Khairabad and Gorakhpur, and these, again were divided in numerous mahals and dasturs.

It seems to have been of nearly the same extent as the Province of Oudh at the time of annexation to British India in 1858, and to have differed only in including Gorakhpur, Basti, and Azamgarh, and in excluding Tanda, Aldemau, and Manikpur, or the territory to the east and South of Faizabad, Sultanpur, and Pratapgarh.[4]

Under the Nawabs of Awadh

The Nawabs of Awadh were a Persian Shia Muslim dynasty from Nishapur[5][6] , who not only encouraged the existing Persian-language belle-lettrist activity to shift from Delhi, but also invited, and received, a steady stream of scholars, poets, jurists, architects, and painters from Iran[7] 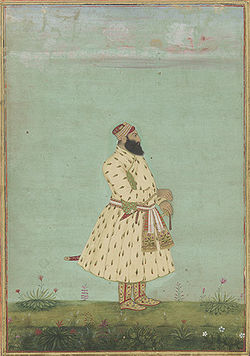 Saadat Khan Burhanul Mulk was appointed Nawab in 1722 and established his court in Faizabad[8] near Lucknow. He took advantage of a weakening Mughal Empire in Delhi to lay the foundation of the Awadh dynasty. His successor was Safdarjung the very influential noble at the Mughal court in Delhi. Until 1819, Awadh was a province of the Mughal Empire administered by a Nawab.

Awadh was known as the granary of India and was important strategically for the control of the Doab, the fertile plain between the Ganges and the Yamuna rivers. It was a wealthy kingdom, able to maintain its independence against threats from the Marathas, the British and the Afghans.

The third Nawab, Shuja-ud-Daula fell out with the British after aiding Mir Qasim the fugitive Nawab of Bengal. He was comprehensively defeated in the Battle of Buxar by the British East India Company, after which he was forced to pay heavy penalties and cede parts of his territory. The British appointed a resident in 1773, and over time gained control of more territory and authority in the state. They were disinclined to capture Awadh outright, because that would bring them face to face with the Marathas and the remnants of the Mughal Empire.

The fourth Nawab Asaf-Ud-Dowlah shifted his capital from Faizabad to Lucknow and laid the foundation of a great city. His rule saw the building of the Asafi Imambara and Rumi Darwaza, built by Raja Tikait Rai Nawab Wazir (Diwan) of Awadh, which till date are the biggest architectural marvels in the city.

In 1798, the fifth Nawab Wazir Ali Khan alienated both his people and the British, and was forced to abdicate. The British then helped Saadat Ali Khan to the throne. Saadat Ali Khan was a puppet king, who in the treaty of 1801 ceded half of Awadh to the British East India Company and also agreed to disband his troops in favour of a hugely expensive, British-run army. This treaty effectively made part of the state of Awadh a vassal to the British East India Company, though they continued to be part of the Mughal Empire in name till 1819.

Silver rupee of Awadh, struck in the name of the Mughal emperor Shah Alam II at Lucknow in AH 1229 (=1814-15 CE). The coin features a stylized fish on the reverse, the dynastic symbol of the Nawabs of Awadh, seen also on the Awadh flag. At this time, the fiction that Awadh was subject to the Mughal emperor was maintained.

Silver rupee of Wajid Ali Shah, struck at Lucknow in AH 1267 (= 1850-51 CE) and showing the Awadh coat of arms. Starting in 1819, coins no longer mentioned the Mughal emperor, but were struck in the nawab's own name.

Coins were struck under the nawab's control for the first time in 1737, at a new mint opened in Banaras, although the coins named the Mughal emperor, not the nawab.[9] After the Battle of Buxar, the British seized Banaras, and so the mint was moved in 1776 to Lucknow. From there, coins in the name of the Mughal emperor continued to be struck, and they continued to name Muhammadabad Banaras as the mint. It was only in 1819 that Nawab Ghaziuddin Haidar finally started to strike coins in his own name. Soon thereafter, Awadhi coins started to feature the kingdom's European style coat of arms.

The wars and transactions in which Shuja-ud-Daula was engaged, both with and against the British East India Company, led to the addition of Karra, Allahabad, Fatehgarh, Kanpur, Etawah, Mainpuri, Farrukhabad, Rohilkhand, to the Oudh dimensions, and thus they remained until the traty of 1801 with Saadat Ali Khan, by which province was reduced considerably as half of Oudh was ceded to the British East India Company. Khairigarh, Kanchanpur, and what is now the Nepal Terai were ceded in 1816, in liquidation of Ghazi ud din Haider's loan of a million sterling towards the expense of Nepal war; and at the same time pargana of Nawabganj was added to Gonda district in exchange for Handia, or Kawai, which was transferred from Pratapgarh to Allahabad.[4]

The treaty of 1801 formed an arrangement that was very beneficial to the Company. They were able to use Awadh's vast treasuries, repeatedly digging into them for loans at reduced rates. In addition, the revenues from running Awadh's armed forces brought them useful revenues while it acted as a buffer state. The Nawabs were ceremonial kings, busy with pomp and show but with little influence over matters of state. By the mid-19th century, however, the British had grown impatient with the arrangement and wanted direct control. They started looking about for an excuse, which the decadent Nawabs readily provided.

United Provinces of Agra and Oudh, 1903

In 1856 the East India Company first moved its troops to the border, then annexed the state, which was placed under a chief commissioner - Sir Henry Lawrence. Wajid Ali Shah, the then Nawab, was imprisoned, and then exiled by the Company to Calcutta. In the subsequent Revolt of 1857 his 14 year old son Birjis Qadra was crowned ruler. Sir Henry was killed in the hostilities. Following the rebellion's defeat, Qadra and other rebel leaders obtained asylum in Nepal.

Those company troops who were recruited from the state, along with some of the nobility of the state, were major players in the events of 1857. The rebels took control of Awadh, and it took the British 18 months to reconquer the region, a period which included the famous Siege of Lucknow. Oudh was placed back under a chief commissioner, and was governed as a British province.

The Tarai to the north of Bahraich including large quantity of valuable forest and grazing ground, was made over to the Nepal Darbar in 1860, in recognition of their services during the Revolt of 1857, and in 1874 some further cessions, on a much smaller scale, but without any apparent reason, were made in favour of the same Government.[4]

In 1877 the offices of lieutenant-governor of the North-Western Provinces and chief commissioner of Oudh were combined in the same person; and in 1902, when the new name of United Provinces of Agra and Oudh was introduced, the title of chief commissioner was dropped, though Oudh still retained some marks of its former independence.

The region of Awadh is considered to be the center of Ganga-Jamuni culture.[10]

Kebabs are an important part of Awadhi cuisine

Awadhi Cuisine is primarily from the city of Lucknow and its environs. The cooking patterns of the city are similar to those of Central Asia, the Middle East, and Northern India as well. The cuisine consists of both vegetarian and non-vegetarian dishes. Awadh has been greatly influenced by Mughal cooking techniques, and the cuisine of Lucknow bears similarities to those of Kashmir, Punjab and Hyderabad; and the city is famous for its Nawabi foods.

The bawarchis and rakabdars of Awadh gave birth to the dum style of cooking or the art of cooking over a slow fire, which has become synonymous with Lucknow today.[11] Their spread would consist of elaborate dishes like kebabs, kormas, biryani, kaliya, nahari-kulchas, zarda, sheermal,Taftan, roomali rotis and warqi parathas. The richness of Awadh cuisine lies not only in the variety of cuisine but also in the ingredients used like mutton, paneer, and rich spices including cardamom and saffron.

The events surrounding the 1856 overthrow of Wajid Ali Shah and the annexation of Awadh by the British are depicted in the 1977 film The Chess Players (Shatranj Ke Khilari) by the acclaimed Indian director Satyajit Ray.

The movies of Umrao Jaan are based on two principal cities of Awadh Lucknow and Faizabad.

The region has been in the center of various period films of Bollywood and modern films like Main, Meri Patni Aur Woh and Paa to name a few.It has also have been shot in various songs of Bollywood.