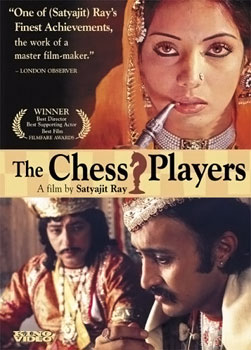 "Shatranj Ke Khilari" ("The Chess Players") is a 1977 film by i director , based on the short story of the same name by Munshi , featuring the actors Sanjeev Kumar, , David Abraham and . plays the role of General James Outram, and plays the role of Avadh king . Unlike most of Ray's films, the dialogue in the film is in and .

The film is set in 1856 and shows the life and customs of 19th century at the eve of the , and importantly the politics of colonial expansion by the and the deluded divisions of Indian monarchs.

Ray was so impressed with that he decided to use his voice as commentary in "Shatranj Ke Khiladi" since he did not find any suitable role for him. [http://www.hindustantimes.in/news/specials/amitabh/trivia.htm]

The film shows in parallel the helpless, historical drama of the Indian kingdom (whose capital is ) and its Muslim king Nawab , who is captured by the British alongside the story of two chess-obsessed noblemen. Nawab, artist and poet, no longer in command, could do nothing but cry in poetic fashion, because the British had already signed with him a treaty of protection. Parallel to this drama is the personal (and sometimes humorous) tale of two rich noblemen of this kingdom, inseparable friends, who became passionately obsessed with the game of "",(), neglecting their wives.The role of Captain Weston, so British in his ways, but in love with , is also worth noting.

In the last scene, after which Mir shoots at Mirza and complains out loud "I won't have a partner to play chess with", Mirza responds to him "but you have one in front of you!" (thus making him understand that he forgives him) and he finally concludes that "after nightfall, we will go back home. We both need darkness to hide our faces."