An overview of electromagnetic radiation absorption. This example discusses the general principle using visible light as a specific example. A white beam source – emitting light of multiple wavelengths – is focused on a sample (the complementary color pairs are indicated by the yellow dotted lines). Upon striking the sample, photons that match the energy gap of the molecules present (green light in this example) is absorbed in order to excite the molecule. Other photons transmit unaffected and, if the radiation is in the visible region (400-700nm), the sample color is the complementary color of the absorbed light. By comparing the attenuation of the transmitted light with the incident, an absorption spectrum can be obtained.

An example of applying Absorption spectroscopy is the first direct detection and chemical analysis of the atmosphere of a planet outside our solar system in 2001. Sodium filters the alien star light of HD 209458 as the hot Jupiter planet passes in front. The process and absorption spectrum are illustrated above. Image Credit: A. Feild, STScI and NASA website.

There are a wide range of experimental approaches to measuring absorption spectra. The most common arrangement is to direct a generated beam of radiation at a sample and detect the intensity of the radiation that passes through it. The transmitted energy can be used to calculate the absorption. The source, sample arrangement and detection technique vary significantly depending on the frequency range and the purpose of the experiment.

Solar spectrum with Fraunhofer lines as it appears visually.

A material's absorption spectrum is the fraction of incident radiation absorbed by the material over a range of frequencies. The absorption spectrum is primarily determined[1][2][3] by the atomic and molecular composition of the material. Radiation is more likely to be absorbed at frequencies that match the energy difference between two quantum mechanical states of the molecules. The absorption that occurs due to a transition between two states is referred to as an absorption line and a spectrum is typically composed of many lines.

The frequencies where absorption lines occur, as well as their relative intensities, primarily depend on the electronic and molecular structure of the molecule. The frequencies will also depend on the interactions between molecules in the sample, the crystal structure in solids, and on several environmental factors (e.g., temperature, pressure, electromagnetic field). The lines will also have a width and shape that are primarily determined by the spectral density or the density of states of the system.

The energy associated with the quantum mechanical change primarily determines the frequency of the absorption line but the frequency can be shifted by several types of interactions. Electric and magnetic fields can cause a shift. Interactions with neighboring molecules can cause shifts. For instance, absorption lines of the gas phase molecule can shift significantly when that molecule is in a liquid or solid phase and interacting more strongly with neighboring molecules.

Absorption lines are often depicted as infinitesimally thin lines, i.e., delta functions, but observed lines always have a shape that is determined by the instrument used for the observation, the material absorbing the radiation and the physical environment of that material. It is common for lines to have the shape of a Gaussian or Lorentzian distribution. It is also common for a line to be characterized solely by its intensity and width instead of the entire shape being characterized.

The integrated intensity—obtained by integrating the area under the absorption line—is proportional to the amount of the absorbing substance present. The intensity is also related to the temperature of the substance and the quantum mechanical interaction between the radiation and the absorber. This interaction is quantified by the transition moment and depends on the particular lower state the transition starts from and the upper state it is connected to.

The width of absorption lines may be determined by the spectrometer used to record it. A spectrometer has an inherent limit on how narrow a line it can resolve and so the observed width may be at this limit. If the width is larger than the resolution limit, then it is primarily determined by the environment of the absorber. A liquid or solid absorber, in which neighboring molecules strongly interact with one another, tends to have broader absorption lines than a gas. Increasing the temperature or pressure of the absorbing material will also tend to increase the line width. It is also common for several neighboring transitions to be close enough to one another that their lines overlap and the resulting overall line is therefore broader yet.

Relation to scattering and reflection spectra 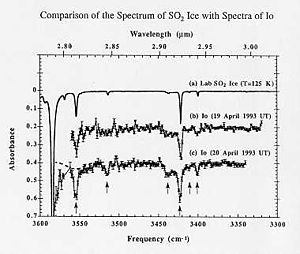 The specificity also allows unknown samples to be identified by comparing a measured spectrum with a library of reference spectra. In many cases, it is possible to determine qualitative information about a sample even if it is not in a library. Infrared spectra, for instance, have characteristics absorption bands that indicate if carbon-hydrogen or carbon-oxygen bonds are present.

An absorption spectrum can be quantitatively related to the amount of material present using the Beer-Lambert law. Determining the absolute concentration of a compound requires knowledge of the compound's absorption coefficient. The absorption coefficient for some compounds is available from reference sources, and it can also be determined by measuring the spectrum of a calibration standard with a known concentration of the target.

One of the unique advantages of spectroscopy as an analytical technique is that measurements can be made without bringing the instrument and sample into contact. Radiation that travels between a sample and an instrument will contain the spectral information, so the measurement can be made remotely. Remote spectral sensing is valuable in many situations. For example, measurements can be made in toxic or hazardous environments without placing an operator or instrument at risk. Also, sample material does not have to be brought into contact with the instrument—preventing possible cross contamination.

Remote spectral measurements present several challenges compared to laboratory measurements. The space in between the sample of interest and the instrument may also have spectral absorptions. These absorptions can mask or confound the absorption spectrum of the sample. These background interferences may also vary over time. The source of radiation in remote measurements is often an environmental source, such as sunlight or the thermal radiation from a warm object, and this makes it necessary to distinguish spectral absorption from changes in the source spectrum. 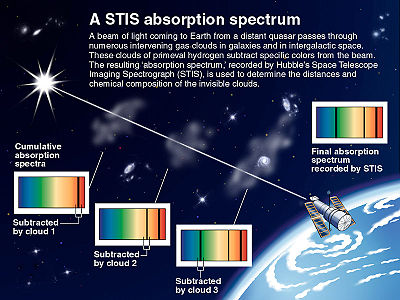 Astronomical spectroscopy is a particularly significant type of remote spectral sensing. In this case, the objects and samples of interest are so distant from earth that electromagnetic radiation is the only means available to measure them. Astronomical spectra contain both absorption and emission spectral information. Absorption spectroscopy has been particularly important for understanding interstellar clouds and determining that some of them contain molecules. Absorption spectroscopy is also employed in the study of extrasolar planets. Detection of extrasolar planets by the transit method also measures their absorption spectrum and allows for the determination of the planet's atmospheric composition.

Theoretical models, principally quantum mechanical models, allow for the absorption spectra of atoms and molecules to be related to other physical properties such as electronic structure, atomic or molecular mass, and molecular geometry. Therefore, measurements of the absorption spectrum are used to determine these other properties. Microwave spectroscopy, for example, allows for the determination of bond lengths and angles with high precision.

In addition, spectral measurements can be used to determine the accuracy of theoretical predictions. For example, the Lamb shift measured in the hydrogen atomic absorption spectrum was not expected to exist at the time it was measured. Its discovery spurred and guided the development of quantum electrodynamics, and measurements of the Lamb shift are now used to determine the fine-structure constant.

A wide variety of radiation sources are employed in order to cover the electromagnetic spectrum. For spectroscopy, it is generally desirable for a source to cover a broad swath of wavelengths in order to measure a broad region of the absorption spectrum. Some sources inherently emit a broad spectrum. Examples of these include globars or other black body sources in the infrared, mercury lamps in the visible and ultraviolet and x-ray tubes. One recently developed, novel source of broad spectrum radiation is synchotron radiation which covers all of these spectral regions. Other radiation sources generate a narrow spectrum but the emission wavelength can be tuned to cover a spectral range. Examples of these include klystrons in the microwave region and lasers across the infrared, visible and ultraviolet region (though not all lasers have tunable wavelengths).

The detector employed to measure the radiation power will also depend on the wavelength range of interest. Most detectors are sensitive to a fairly broad spectral range and the sensor selected will often depend more on the sensitivity and noise requirements of a given measurement. Examples of detectors common in spectroscopy include heterodyne receivers in the microwave, bolometers in the millimeter-wave and infrared, mercury cadmium telluride and other cooled semiconductor detectors in the infrared, and photodiodes and photomultiplier tubes in the visible and ultraviolet.

If both the source and the detector cover a broad spectral region, then it is also necessary to introduce a means of resolving the wavelength of the radiation in order to determine the spectrum. Often a spectrograph is used to spatially separate the wavelengths of radiation so that the power at each wavelength can be measured independently. It is also common to employ interferometry to determine resolve the spectrum—Fourier transform infrared spectroscopy is a widely used implementation of this technique.

Two other issues that must be considered in setting up an absorption spectroscopy experiment include the optics used to direct the radiation and the means of holding or containing the sample material (called a cuvette or cell). For most UV, visible, and NIR measurements the use of precision quartz cuvettes are necessary.. In both cases, it is important to select materials that have relatively little absorption of their own in the wavelength range of interest. The absorption of other materials could interfere with or mask the absorption from the sample. For instance, in several wavelength ranges it is necessary to measure the sample under vacuum or in a rare gas environment because gases in the atmosphere have interfering absorption features.