Damn Yankees
This article is about the Broadway musical. For other uses, see Damn Yankees (disambiguation).

Damn Yankees is a musical comedy with a book by George Abbott and Douglass Wallop and music and lyrics by Richard Adler and Jerry Ross. The story is a modern retelling of the Faust legend set during the 1950s in Washington, D.C., during a time when the New York Yankees dominated Major League Baseball. The musical is based on Wallop's novel The Year the Yankees Lost the Pennant.

Damn Yankees ran for 1,019 performances in its original 1955 Broadway production. Adler and Ross's success with The Pajama Game and Damn Yankees seemed to point to a bright future for them, but Ross suddenly died of chronic bronchiectasis, at the age of twenty-nine, a few months after Damn Yankees opened.

The producers Harold Prince, Robert Griffith, and Frederick Brisson had decided that the lead actress for the part of "Lola" had to be a dancer. They offered the role to both the movie actress Mitzi Gaynor and ballet dancer Zizi Jeanmaire, each of whom turned down the role. Although Gwen Verdon had sung just one song in her previous show (Can-Can), the producers were willing to take a chance on her. She initially refused, preferring to assist another choreographer, but finally agreed. Choreographer Bob Fosse insisted on meeting her before working with her, and after meeting and working for a brief time, they each agreed to the arrangement.[1]

Damn Yankees opened on Broadway at the 46th Street Theatre on May 5, 1955, transferred to the Adelphi Theatre on May 17, 1957, and ran for a total of 1,019 performances. Directed by George Abbott, scenery and costumes William and Jean Eckart, dances and musical numbers staged by Bob Fosse, musical director Hal Hastings, orchestrations by Don Walker, and dance music arrangements by Roger Adams. 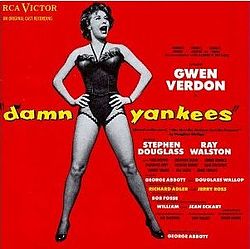 A West End production played at the London Coliseum beginning on March 28, 1957, where the musical played for 258 performances.[2] The production starred Olympic skater Belita (née Gladys Lyne Jepson-Turner) as Lola, but the Fosse choreography was alien to her style, and she was soon replaced by Elizabeth Seal.[3] The production also starred Bill Kerr as Mr. Applegate, and Ivor Emmanuel as Joe Hardy.

In the mid-1970s, Vincent Price starred as Applegate in summer stock productions of the show. In the late 1970s and early 1980s film actor Van Johnson appeared as Mr. Applegate in productions throughout the U.S.A. A Broadway revival opened at the Marquis Theatre on March 3, 1994 and ran for 718 performincas and 18 previews. Featured were Bebe Neuwirth as Lola and Victor Garber as Mr. Applegate. Garber was succeeded by Jerry Lewis, making his Broadway debut, on March 12, 1995,[4] who then starred in a national tour and also played the role in a London production. Jack O'Brien directed, with choreography by Rob Marshall, assisted by his sister, Kathleen Marshall. O'Brien is also credited with revisions to the book.[5]

The 1994 revival production of Damn Yankees opened in the West End at the Adelphi Theatre on June 4, 1997 (previews started May 29) and closed on August 9, 1997. Jerry Lewis reprised his role as Mr. Applegate.[6]

A revival was produced by the City Center Encores! Summer Stars series from July 5 to July 27, 2008. It starred Jane Krakowski as Lola, Sean Hayes as Applegate, Randy Graff as Meg, Megan Lawrence as Gloria Thorpe (replacing an injured Ana Gasteyer during rehearsal), PJ Benjamin as Joe Boyd, and Cheyenne Jackson as Joe Hardy. John Rando directed and the original Fosse choreography was reproduced by Mary MacLeod. Given the substantial changes in the 1994 revival, this is considered by some the first authentic revival of the original production.[7]

Note: This is the plot of the 1994 Broadway revival of the play; there are differences from the 1955 version. For the film version, see Damn Yankees (film).

Middle-aged real estate agent Joe Boyd is a long-suffering fan of the pathetic Washington Senators baseball team. His wife Meg laments this ("Six Months Out Of Every Year"). After Meg has gone to bed, Joe sits up late, grumbling that if the Senators just had a "long ball hitter" they could beat the "damn Yankees". "I'd sell my soul for a long ball hitter," he laments. Suddenly, "Mr. Applegate" appears. He looks like a slick salesman, but he is really the Devil, and he offers Joe exactly that deal: if he gives up his soul, Joe will become "Joe Hardy", the young slugger the Senators need. Joe accepts, even though he must leave his wife Meg ("Goodbye Old Girl"). However, Joe's business sense makes him insist on an escape clause. The Senators' last game is on September 25, and if he plays in that final game, he is "in for the duration". If not, he has until 9 o'clock that night to walk away from the deal and return to his normal life.

At the ball park, the hapless Senators vow to play their best despite their failings ("Heart"). Then Joe Hardy is suddenly discovered, and joins the team. Gloria, a reporter, praises him ("Shoeless Joe from Hannibal, Mo"). His hitting prowess enables the Senators to move up the standings.

Though Joe is increasingly successful, he truly misses his wife and begins boarding with her. Meg and the young man begin to bond, especially over her "lost" husband ("A Man Doesn't Know"). Fearful of losing his deal, Mr. Applegate calls Lola, "the best homewrecker on [his] staff", to seduce Joe and ensure his damnation. Lola promises to deliver ("A Little Brains, A Little Talent"), and Applegate introduces her as a sultry South American dancer named "Señorita Lolita Banana". Lola sings a seductive song ("Whatever Lola Wants, Lola Gets"), but Joe's devotion to his wife proves too strong, even for her. Applegate punishes her by sending her to hell, where she performs with other damned souls ("Who's Got the Pain").

Applegate decides to switch tactics to ensure Joe's failure. He releases false information about Joe Hardy's true identity being "Shifty McCoy," an escaped criminal and con artist. When Gloria discovers this information, she presses charges, and Joe is forced into court.

The Senators prepare for the final game against the Yankees for the pennant, and worry about Joe - but vow to think of nothing but winning ("The Game"). Meanwhile, angry fans are seeking Joe out, so he decides to leave the Boyd home. As he does, he tells Meg indirectly that he is her old husband ("Near to You"). Meanwhile, Applegate is exhausted by the work he has put into collecting one soul, and thinks about the "simpler" times in his long history ("Those Were the Good Old Days").

Joe's day in court is on the same day as the Senators' final game. As Joe Hardy technically does not exist, he cannot produce any kind of identification. The owner of the Senators, coach, and even Lola (disguised as "Senora McCoy") testify against Joe; unfortunately, their opinions are invalid. Gloria suggests that Applegate take the stand, but he is unable to take the oath due to its provision against lying. "Don't you have another version of that thing?" he asks. Joe realizes that Applegate is simply stalling to keep him from meeting his 9 o'clock deadline. Applegate claims that Joe "just needs time to think", and sends him to the lower levels of hell, where history's most famous lovers wait. Lola meets Joe there, and realizes that he truly does love Meg. She helps him by sending him into the final game, and delays Applegate by coercing him into a duet ("Two Lost Souls").

When Applegate finally arrives at the game, it is five minutes to nine, and Joe is at bat. As time runs out, Meg, her friends, and even Lola begin cheering for Joe. Applegate uses his powers to give Joe two strikes. The clock strikes nine, and Applegate claims victory—but at the last second, Joe cries, "Let me go!" The deal is broken, and he is transformed back into his old self. Amazingly, he is still able to hit a home run and win the Senators the pennant.

Back at home, Joe rushes into Meg's arms. Applegate appears on the scene, claiming that Joe owes him his soul. Joe begs Meg to hold him and not let go, and she begins to sing ("A Man Doesn't Know Reprise"). Applegate promises to make Joe young again, and even ensure a World Series victory. But his powers are useless against the pair's true love, which Lola points out. Applegate shouts that such a thing cannot exist - but he is wrong. He and Lola vanish back into Hell, defeated, with Joe and Meg united again forever.

A film version, directed by George Abbott and Stanley Donen, was released in 1958. With the exception of Tab Hunter in the role of Joe Hardy (replacing Stephen Douglass), the Broadway principals reprised their stage roles. The film version is very similar to the stage version.

It has been announced that a new contemporary film adaptation of the musical will star Jim Carrey as Applegate and Jake Gyllenhaal as Joe Hardy.[10]