The Mari language (Mari: марий йылме, marii jylme, Russian: марийский язык), spoken by more than 600,000 people, belongs to the Uralic language family. It is spoken primarily in the Mari Republic (Mari: Марий Эл, Marii El, i.e., 'Mari land') of the Russian Federation as well as in the area along the Vyatka river basin and eastwards to the Urals. Mari speakers, known as the Mari are found also in the Tatarstan, Udmurtia, and Perm regions.

Mari today has a unified standard form with two variants (Hill and Meadow aka Western and Eastern, with the Eastern variant prevailing in everyday usage), using a modified version of the Cyrillic alphabet, and is the titular and official language of its republic, alongside Russian. The use of two "variants", as opposed to two "languages", has been hotly debated: Maris recognize the unity of the ethnic group, and the two forms are very close, but distinct enough to cause some problems with communication.[citation needed]

The Mari language and people were known as "Cheremis" (Russian: черемисы, черемисский язык). In mediæval texts the variant forms Cheremis', Sarmys, Tsarmys (Russian: черемись, сармыс, цармис) are also found, as well as Tatar Cyrillic: Чирмеш, Latin: Çirmeş; Chuvash: Çармăс, Şarmăs) before the Russian Revolution. The term Mari comes from the Maris' self-designation марий (mari), which is thought to have been borrowed from the Indo-Aryan term *mar- (< PIE *mer-) 'man.

Most Maris live in rural areas with slightly more than a quarter living in cities. In the republican capital, Yoshkar-Ola, the percentage of Maris is just over 23%. At the end of the 1980s (per the 1989 census) Maris numbered 670,868, of whom 80% (542,160) claimed Mari as their first language and 18.8% did not speak Mari. In the Mari Republic, 11.6% claimed Mari was not their first language. In a survey by the Mari Research Institute more than 3/4 of Maris survey considered Mari language to be the most crucial marker of ethnic identity, followed by traditional culture (61%) and common historical past (22%), religion (16%), character and mentality (15%) and appearance (11%) (see Glukhov and Glukhov for details). A gradual downward trend towards assimilation to Russian has been noted for the Communist period: the 1926 census indicated more than 99% of Maris considered Mari their first language, declining to less than 81% in 1989. Some qualitative evidence of a reversal in recent years has been noted.

There was no state support for Mari language in Imperial Russia, and with the exception of some enthusiasts and numerous ecclesiastical texts by the Russian Orthodox Church, there was almost no education in Mari language. After the October Revolution, there was a period of support of all lesser national cultures in the Soviet Union, but eventually Russification returned. While the development of Mari literary language continued, still, only elementary-school education was available in Mari in the Soviet period, with this policy ending in village schools in the 1970–1980s. The period of glasnost and perestroika in the 1990s opened opportunities for a revival of efforts expand the use of Mari in education and the public sphere. In the 1990s, the Mari language, alongside Russian, was proclaimed in the republican constitution to be an official language of Mari El. By the beginning of the 21st century, Mari language and literature was taught in 226 schools. At the History and Philology Department of the Mari State University and the Krupskaya Teachers' Training Institute (Yoshkar-Ola), more than half of the subjects are taught in Mari.

Traditionally there are two macrodialects of Mari: Hill Mari, spoken on the upper bank of the Volga River, near Kozmodemyansk, and Meadow Mari on the lowland bank in and around the republican capital, Yoshkar-Ola. Today linguists distinguish four dialects: Hill (right-bank of the Volga and part of the left bank), Meadow (at the confluence of the Kokshaga and Volga rivers), Eastern (east of the Vyatka), and North-Western. Some Mari also speak Tatar language. 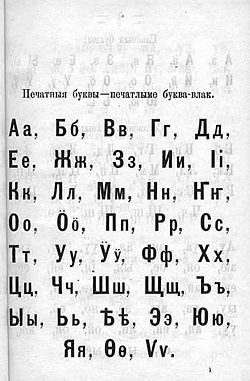 The Mari alphabet in a primer from 1887

Draft version of the Latin alphabet from 1930

Like other Uralic languages, Mari is an agglutinating language. It lacks grammatical gender, and does not use articles.

Stress is not phonemic in Mari, but a dynamic stress system is exhibited phonetically, the stressed syllable being higher in pitch and amplitude and greater in length than an unstressed syllable. Generally, there is one prominent syllable per word and prominence may be found in any syllable of the word. Post- and prefixes behave as clitics, i.e., they do not have their own stress. For example, пӧ́рт (house) гыч (out of) → [ˈpørt ɣɤt͡ʃ]; му́ро (song) дене (with) → [ˈmuro ðene].

Consonants are shown in Cyrillic, Latin, and the IPA:

Meadow Mari has 9 productive cases, of which 3 are locative cases. The usage of these is restricted to inanimate objects.

Many cases, aside from their basic function, are used in other situations, such as in expressions of time.

The nominative case is used for subjects, predicatives and for other grammatical functions.

The genitive case is used for possessive constructions.

The dative is the indirect object's case.

The accusative is the direct object's case.

The comitative is used as when a subject or an object can be split up into parts, or in adverbials expressing the involvement of an object in an action.

The comparative is used to express the likeness to something.

The inessive used to state where something is.

The illative is used to state where something is going.

The lative is used to express into what something is going.

If a locative statement was to be made about an animate object, postpositions would be used.

Additionally, terms denoting family members have Vocative forms. These are, however, not created with a specific paradigm, and only exist in a few pre-defined cases.

Hill Mari has these cases, plus the Caritative case, which is used to form adverbials stating without the involvement or influence of what an action happens.

Mari, though an agglutinative language, does not have a separate morpheme to signify plurality. There are three particles, which are attached to the end of words with a hyphen, used to signify plural.

Every grammatical person in Mari has its own possessive suffix.

Additional particles, falling into none of the categories above, can be added to the very end of a word, giving it some additional meaning. For example, the suffix -ат (-at), means 'also' or 'too'.

The arrangement of suffixes varies from case to case. While the case suffixes are after the possessive suffixes in the genitive and the accusative, the opposite is the case for the locative cases. In the dative, both arrangements are possible.

There are many other arrangements in the plural - the position of the plural particle is flexible. The arrangement here is one commonly used possibility.

Comparison happens with adjectives and adverbs. The comparative is formed with the suffix -рак (-rak). The superlative is formed by adding the word эн (en) in front.

In Meadow Mari, words can conjugate according to two conjugation classes. These differ from each other in all forms but the infinitive and the third person plural of the imperative. Unfortunately, the infinitive is the form denoted in dictionaries and word lists. It is, thus, necessary to either mark verb infinitives by their conjugation class in word lists, or to include a form in which the conjugation class is visible - usually, the first person singular present, which ends in -ам (or -ям) for verbs in the first declination, and in -ем (or -эм) for second declination verbs.

The three tenses of Mari verbs are:

The present tense is used for present and future actions, for states of being and for habitual actions, among others.

The first preterite is used to express observed, recent actions.

The second preterite is used for actions which lie more distantly in the past.

Additional tenses can be formed through periphrasis.

The indicative is used to express facts and positive beliefs. All intentions that a particular language does not categorize as another mood are classified as indicative. It can be formed in all persons, in all times.

The imperative expresses direct commands, requests, and prohibitions. It only exists in the present tense, and exists in all persons but the first person singular.

The desiderative is used to express desires. It can be formed for all persons, in the present tense and in the two periphrastic imperfect.

Negation in Mari uses a 'negative verb', much like Finnish does. The negative verb is more versatile than the negative verb in Finnish (see Finnish grammar), existing in more grammatical tenses and moods. It has its own form in the present indicative, imperative and desiderative, and in the first preterite indicative. Other negations are periphrastic.

The negation verb in its corresponding form is put in front of the negated verb in its second person singular (the stem-only form), much as it is in Finnish and Estonian.

The verb улаш (ulaš) - to be - has its own negated forms.

Verbs have two infinitive forms - the standard infinitive, and the necessive infinitive, used when a person must do something. The person needing to do something is put in the dative in such a situation.

There are four participles in Meadow Mari:

There are five gerunds in Meadow Mari:

Word order in Mari is subject–object–verb.

Some common words and phrases

Note that the accent mark, which denotes the place of stress, is not used in actual Mari orthography.