Melanie Anne Safka-Schekeryk (born February 3, 1947) is an American singer-songwriter.[1] Known professionally as simply Melanie, she is best known for her hits "Brand New Key", "Ruby Tuesday" and "Lay Down (Candles in the Rain)".[2][3]

Melanie grew up in the Astoria neighborhood of Queens, New York City, New York.[4] After school, her parents insisted she go to college, so she studied acting at the American Academy of Dramatic Arts in New York.[5]

She married Peter Schekeryk in about 1970 and they had three children.[6]

She made her first public appearance at age four on the radio show Live Like A Millionaire, performing the song "Gimme a Little Kiss". She attended Red Bank High School in Red Bank, New Jersey, graduating in 1966. Melanie was a student at New York's American Academy of Dramatic Arts when she began singing in the folk clubs of Greenwich Village and signed her first recording contract.

Initially signed to Columbia Records in the United States, Melanie released two singles on the label. Subsequently she signed with Buddah Records and first found chart success in Europe when her 1969 song, "Bobo's Party", reached Number 1 in France. Her debut album received rave reviews from Billboard which heralded her voice as "... wise beyond her years. Her non-conformist approach to the selections on this LP make her a new talent to be reckoned with."

Later in 1969, Melanie had a hit in the Netherlands with "Beautiful People", before performing at the Woodstock Festival. The inspiration for her signature song, "Lay Down (Candles in the Rain)", apparently arose from the Woodstock audience lighting candles during her set. The recording became a hit in Europe, Australia, Canada, and the United States in the spring and summer of 1970. The B-side of the single featured Melanie's spoken-word track "Candles in the Rain". "Lay Down" became Melanie's first Top Ten hit in America, peaking at #6 on the Billboard singles chart, and achieving worldwide success. Later hits included "Peace Will Come (According To Plan)" and a cover of the Rolling Stones' "Ruby Tuesday". 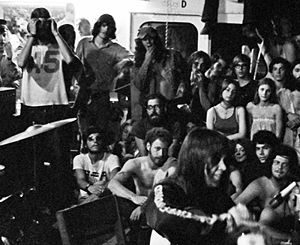 In 1970, Melanie was the only artist to brave the court injunction banning the Powder Ridge Rock Festival, playing for the crowd on a homemade stage powered by Mister Softee trucks. Shortly following this performance, Melanie played at the Strawberry Fields Festival, held from August 7 to 9, 1970, at Mosport Park, Ontario. She also performed at the Isle of Wight Festival in 1970 where she was introduced by Keith Moon and received four standing ovations (she also appeared 40 years later at the 2010 Isle of Wight festival). Melanie was also the artist who sang to herald in the summer solstice at Glastonbury Fayre (later the Glastonbury Festival) in England in June 1971. She performed again at Glastonbury in 2011, the fortieth anniversary of the original festival.[7]

Melanie left Buddah Records when they insisted that she produce albums on demand. In 1971 she formed her own label, Neighborhood Records, with Peter Schekeryk, who was both her producer and husband.

Melanie had her biggest American hit on the Neighborhood label: the novelty-sounding 1972 number one "Brand New Key" (often referred to as "The Roller Skate Song"). "Brand New Key" sold over three million copies worldwide[citation needed] and was featured in the 1997 movie Boogie Nights.

When first released, "Brand New Key" was banned by some radio stations because some saw sexual innuendo in the lyrics:

The follow-up single to "Brand New Key" was "Ring the Living Bell". To compete with this release, Melanie's former record company released "The Nickel Song", which she had recorded while still signed to Buddah Records. Both songs were simultaneous Top 40 hits while "Brand New Key" was still on the charts — setting a record for the first female performer to have three Top 40 hits concurrently.[citation needed] Melanie was awarded Billboard's #1 Top Female Vocalist for 1972.

Melanie had another Top 40 hit single in 1973 with "Bitter Bad", a song that marked a slight departure from the hippie sentiments of earlier hits (with lyrics such as "If you do me wrong I'll put your first and last name in my rock n' roll song"). Other chart hits during this period were the self-penned "Together Alone" and a cover of "Will You Love Me Tomorrow".

Melanie has been awarded two gold albums (and a gold single for "Brand New Key") and three of her compositions were hits for The New Seekers. She is also well-known for her musical adaptations of children's songs, including "Alexander Beetle" and "Christopher Robin".

In 1973, Melanie started to retreat from the spotlight to begin a family. Her daughter Leilah was born that same year. When she became an official UNICEF ambassador in 1972, she agreed to forgo a world tour in favour of raising money for the organization.

In 1976, Melanie released one album on Atlantic Records, Photograph, which was overseen by Ahmet Ertegün. The album was praised by the New York Times as one of the year's best, although it was largely ignored by the public. It was re-issued on CD in 2005 with an additional disc of unreleased material.

In the 1980s, the Quaker Oats Company used a version of "What Have They Done to My Song Ma" in their commercials for Instant Oatmeal with the revised lyrics "Look what they've done to my oatmeal".

In 1983, she wrote the music and lyrics for a theatrical musical, Ace of Diamonds, with a book by Ed Kelleher and Seymour Vall, based on a series of letters written by Annie Oakley. Though never fully produced, several staged readings were performed at Lincoln Center starring Melanie as the narrator and pop singer/actress Annie Golden as Oakley.[8]

In 1989, she won an Emmy Award for writing the lyrics to "The First Time I Loved Forever", the theme song for the TV series Beauty and the Beast.

With one exception her albums were produced by her husband, Peter Schekeryk, who died suddenly in 2010.[9] Her three children — Leilah, Jeordie and Beau-Jarred — are also musicians. Beau-Jarred is a guitarist and accompanies his mother on tour. 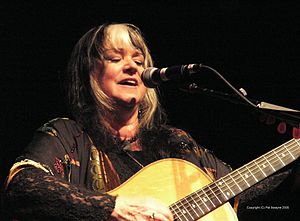 Melanie's most recent album, Paled By Dimmer Light, was released in 2004. It was co-produced by Peter and Beau-Jarred Schekeryk and includes the songs "To Be The One", "Extraordinary", "Make It Work" and "I Tried To Die Young". In early 2005 most of Melanie's back-catalogue was re-released on the internet-only music label ItsAboutMusic.com. After a series of disagreements the relationship between the artist and the label was severed.

In 2007, Melanie was invited by Jarvis Cocker to perform at the Meltdown Festival at the Royal Festival Hall in London. Her sold-out performance received critical acclaim with The Independent claiming "it was hard to disagree that Melanie has earned her place alongside Joan Baez, Judy Collins, Joni Mitchell and Marianne Faithfull in the pantheon of iconic female singers. Meltdown was all the better for her presence".[citation needed] The concert was filmed for a DVD entitled Melanie: For One Night Only which was released in October 2007.

Melanie also recorded a song called "Psychotherapy", sung to the tune of the "Battle Hymn of the Republic", which parodies aspects of Freudian psychoanalysis. It has been played on the Dr. Demento show.

Melanie identifies herself politically as a libertarian, stating: "I'm a total Libertarian, and I am not a Democrat, a Socialist, or a Republican."[10] For a time, at the beginning of her career, Melanie was a follower of Meher Baba and this influenced some of her songs (such as "Love to Lose Again" and "Candles in the Rain"). Over time she became disenchanted with other followers and then disassociated herself from Meher Baba. In 2006 she underwent a life-altering experience with Mata Amritanandamayi or Amma (Mother) as she is also known, or as the "hugging saint" from India, which inspired Melanie to write "Motherhood Of Love", one of her more recent songs.[citation needed]

In 1971, Mott the Hoople released a version of this song on their Wildlife album. Vicky Leandros recorded a Greek version in 1972. In 1994, Philadelphia indie rock band The Strapping Fieldhands recorded a 3-track no-fi version of the song (as well as a reprise that closes the album) for its EP "In The Pineys". Australian singer Max Sharam's 1995 recording reached the Top 40 on the Australian singles charts. In 1999, Meredith Brooks' release included backing vocals by Queen Latifah.

In 1976, Scrumpy and Western band The Wurzels covered "Brand New Key" with substantially rewritten lyrics as "The Combine Harvester". It reached number one on the UK Singles Chart and stayed there for two weeks. Macy Gray, Dolly Parton and Cher have all performed "Brand New Key" in concert (the last on The Sonny and Cher Show). Country singer Deana Carter covered the song on her 1999 Top 10 album Everything's Gonna Be Alright. The cellist band Rasputina had their version on the album Thanks for the Ether. Female-fronted punk trio The Dollyrots included their version on the album Because I'm Awesome. 2006 American Idol runner-up Katharine McPhee covered "Brand New Key" as the bonus track on her 2010 album Unbroken.

"What Have They Done to My Song Ma"

Daliah Lavi recorded a successful German version of the song in 1971 and Ray Charles released a cover (as "Look What They've Done To My Song, Ma") in 1972. The song has also been covered by Nina Simone and Billie Jo Spears. Yugoslav rock band Bajaga i Instruktori released a cover of it with lyrics in Serbian, called "Vidi šta sam ti uradio od pesme, mama" in 1985.

The Dutch singer Mathilde Santing had a gold record and the first Top 10 hit version of "Beautiful People" in 1997. Die Goldenen Zitronen covered the song on their 2009 album Die Entstehung der Nacht. Sandra Bernhard covered the song on her live album, I Love Being Me, Don't You?

Emiliana Torrini covered "I Really Loved Harold" on her 1996 album Merman. She has also recorded a version of "Lay Down".

The New Seekers covered several Melanie songs, and also charted in the United States with "Beautiful People" (#67), "Look What They've Done To My Song Ma" (#14) and "Nickel Song" (#81). Roger Kellaway covered "Centre of the Circle" on the 1972 album of the same name. An 11 year old Björk covered "Christopher Robin" in Icelandic on her debut album, Björk. The 2003 Australian hip-hop track "The Nosebleed Section" by the Hilltop Hoods sampled "People In The Front Row"; another hip-hop track, an instrumental titled "Crasy Sound", was released in 2008 by Danny! and samples "Summer Weaving". Kiki & Herb opened their Carnegie Hall concert with "Close To It All" (available on CD as Kiki & Herb Will Die For You).

Will Oldham and Tortoise covered "(Some Say) I Got Devil" on their 2006 covers album The Brave and the Bold. Cissy Houston has recorded Melanie's "Any Guy". Alison Moyet performed "Momma, Momma" on her live DVD One Blue Voice and as the b-side to her 2007 single "One More Time".

(Albums marked with an asterisk are compilations)