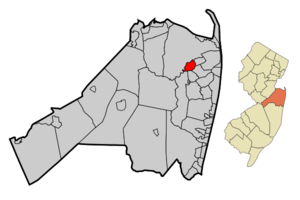 The Borough of Red Bank is a Borough in Monmouth County, incorporated in 1908. As of the , the borough had a population of 11,844.

Alongside Asbury Park and Long Branch the town is considered to be one of the three "artistic" communities of the Jersey Shore.Fact|date=May 2008

Red Bank is located on the southern bank of the , in northern Monmouth County, New Jersey. It is about 24 miles due south of the tip of Manhattan and about 25 nautical miles (29 miles) to the tip of if traveling by water along the Navesink River and through the Raritan Bay. Red Bank is bordered by Middletown Township and the Boroughs of Tinton Falls, Fair Haven, Shrewsbury, and Little Silver.

There were 5,201 households out of which 18.0% had children under the age of 18 living with them, 32.2% were married couples living together, 11.6% had a female householder with no husband present, and 51.9% were non-families. 42.9% of all households were made up of individuals and 15.9% had someone living alone who was 65 years of age or older. The average household size was 2.20 and the average family size was 2.99.

Red Bankis governed under the Borough form of New Jersey municipal government. The government consists of a Mayor and a Borough Council comprising six council members, with all positions elected at large. A Mayor is elected directly by the voters to a four-year term of office. The Borough Council consists of six members elected to serve three-year terms on a staggered basis, with two seats coming up for election each year. ["2005 New Jersey Legislative District Data Book", , April 2005, p. 8.]

As of 2008, the mayor and council members are: [ [http://www.redbanknj.org/mayor_council.html Mayor and Council] , Borough of Red Bank. Accessed , .]

[http://www.RedBankCharterSchool.com Red Bank Charter School] is a that accepts students and receives its funding from property taxes of the town, like a typical public school. It does not charge tuition and operates independently of the public school system, with a separate school board. Students are selected to enroll in the charter school based on an annual lottery, which is open to all Red Bank residents of school age.

Other schools in Red Bank include , and [http://www.mysaintjames.com/index.html St. James Elementary School] which are s affiliated with Saint James parish. Some students from Red Bank attend private and county sponsored schools in the area.

train service on the connects the Red Bank to Penn Station in and to other locations in New Jersey.

*Monmouth Street is a noted commercial and residential street in Red Bank. It is the home to numerous trendy stores, the , and in the 1980s, it was home to , ' nightclub.
*Broad Street is one of the central streets in the community. The street can be seen in the film "". Broad Street has also become famous for its lavish Christmas decorations, which appear on the street during the Holiday Season. They are lit on , during which the street is closed to traffic for a free concert by , after which the lights are all lit. The event is always well-attended, with 2006's [http://www.app.com/apps/pbcs.dll/article?AID=/20061125/NEWS01/611250387/1004] performance featuring the largest turnout, with people lining the streets all the way from in front of to the beginning of . Up to 7,000 people attend the shows annually. [http://www.upstagemagazine.com/articles/getarticle-new.php?ID=3883&wherefrom=search ]

Originally part of "Shrewsbury Towne", Red Bank was named in 1736, "when Thomas Morford sold Joseph French 'a lot of over three acres (12,000 m²) on the west side of the highway that goes to the red bank.' Borough of Red Bank, [http://redbanknj.org/history.html History] , "supra". Red Bank was settled in the 17th century, but was not populous until approximately 1809. By 1844, Red Bank had become a commercial center, focused on , , , and goods for sale in . With the dredging of the , about 1845, Red Bank became a port from which steamboats transported commuters to Manhattan. Red Bank grew in size as a result of this and the laying of rails in the town by the , about 1860.

During the 20th century, Red Bank was a strong cultural, economic, and political center in Monmouth County, New Jersey, until it was hindered by the economic recession that began in 1987., the town authorized the creation of an organization to manage redevelopment in what was designated a Special Improvement District. This organization is known as the [http://www.redbankrivercenter.org/ Red Bank RiverCenter] . RiverCenter retains authority over the management and redevelopment of an agreed-upon "downtown business district."

The downtown district includes Broad Street from the post office to Marine Park and from Maple Avenue to one block east of Broad Street. The district that was originally proposed was much larger. It originally included the commercial areas west of Maple Avenue, including the antique buildings, The Galleria, and Shrewsbury Avenue. However, some property owners in this area were opposed to the idea because they did not want to pay the assessment. Plans for the larger district advanced but opposition became more rigorous. Therefore the proposed district was amended to exclude those who were opposed, and the district that was adopted stops at Maple Avenue.

Red Bank is a noted social and commercial destination, filled with boutiques, designer clothing and home stores, parks, and restaurants. Many events such as the Kaboom fireworks on July, 3rd occur throughout the summer.

The hosts nationally-known performers, including , James Brown, , , Foreigner, , , , and others. The Count Basie Theatre is also home to Phoenix Productions, a non-profit community theatre who puts on large scale musicals four times a year. The opened a large performance space on , , called the . filmed his " Storytellers" special at the Two River Theatre. The , also operated by the Two River Theater Company, is also in Red Bank. There have been several annual festivals held in Red Bank. "See", e.g., [http://www.rbiff.org/ Red Bank International Film Festival] .

There is an annual fireworks display (called " [http://fireworks.redbank.com/ KaBoom! Fireworks on the Navesink] ") held on July 3 that is popular with those residing in the Metropolitan New York Area. Each summer, Red Bank hosts the in partnership with the Jersey Shore Jazz & Blues Society. "", a arts and entertainment festival, is a Red Bank event designed to provide an alternative to alcohol-related events.

, , , and are popular outdoor activities in Red Bank; in the winter, s sail on the frozen Navesink. The Monmouth Boat Club, Marine Park, and the slips of the Inn provide access to the Navesink and, from there, the .

Filmmaker lived in Red Bank while working as an up-and-coming director. His films "", "Dogma", and "" partly took place in the town, primarily on Broad Street.

Smith's production company, , occupies a building on Broad Street in Red Bank. In addition, Smith opened a comic shop/novelty store, "," located at 35 Broad Street, directly across the street from Jack's Music Shoppe, which was a location in "". A scene in "", was filmed in the store, but for the film, the sign was temporarily removed and replaced with a sign that read "Brodie's Secret Stash", due to the fact that the character Brodie owned the store in the movie. That sign now hangs inside the store on display, along with other View Askew paraphernalia, including the "". Regular actors from his film series work and/or make appearances in the store, as many of his fans travel from all across the country to frequent it and buy film-related merchandise.Smith and View Askew host the annual film marathon in various theaters around Red Bank.

Most of Smith's movies also make reference to nearby Leonardo as well as Asbury Park, another community which is famous for being artistic in nature.

Kevin Smith has been known to appear, alongside other actors, inside his comic store. On announced dates, crowds of fans have been known to line the streets of Red Bank for blocks, hoping to meet Smith. [ [http://www.youtube.com/watch?v=IEybUGWCsas A YouTube video showing Kevin Smith fans in Red Bank ] ]

Long Branch, another nearby town, is also known for its artistic vibe, and the three cities are collectively referred to as the "New Jersey Tricity." There is a local publication aiming at the artistic scene called "", as well as several other local music publications including the popular "", which is published out of Asbury Park.

The popular cartoon "" shown on the makes reference to an address at "612 Wharf Avenue" in the episode "MC P. Pants". The address is an actual one, located in Red Bank. This stands to reason since the show is set in an unnamed locale on the New Jersey shore.

An early skit on the classic children's series "" featured a whose winner would be "whisked to beautiful Red Bank, New Jersey" as a prize (illustrated with a still photograph).

The George Sheehan Classic began in 1981 as the Asbury Park 10K Classic and quickly became one of the major road running events on the national calendar. The race moved to Red Bank in 1994 and was renamed to honor the memory of Dr. , the prominent author, philosopher and area physician. “The Doc” has been called the “father of the running boom” in the United States. The Classic was named one of the Top 100 Road Races by "" magazine, and the Best Memorial Race in New Jersey by "". Nearly 2,500 athletes participated in the 2006 Sheehan Classic.

Red Bank is home to , incorporated in 1928, began in a renovated boarding house on Union Street, with 29 beds, one operating room, a delivery suite, and facilities for six newborns. Today, Riverview is a 446-bed acute care hospital serving the northern region of Monmouth County.

Several tunes composed and/or made famous by Red Bank resident name-check the town in their title, including and .

In the essay "Memoirs of a Drudge" (, October 3rd, 1942), Humorist recalls being sent to Red Bank by his newspaper's city editor on a tip that "Violets (are) growing in the snow over in Red Bank". Putting in a telephone call to that town's in advance, Thurber is told by a desk sergeant, "Ain't no violence over here", and nothing more.

Red Bank is increasingly becoming a very high end shopping mecca, to the dismay of many local residents. Broad Street is lined with luxury boutiques and department stores including the infamous "Garmany" of Red Bank Department Store. Designers are coming to Red Bank, including , who opened a convert|6000|sqft|m2|-2|sing=on boutique on Broad Street next to Garmany in November 2007. [ [http://www.webwire.com/ViewPressRel.asp?aId=30289 Tiffany to Open Store on Red Bank’s Historic Broad Street] , press release dated , , accessed , .]

Whereas the town is not as well known for its nightlife as Asbury Park or Long Branch, Red Bank does house a variety of popular nightspots.