The Dassault Falcon 20 is a French business jet and was the first of a family of business jets built by Dassault Aviation.

Marcel Dassault gave the go-ahead for production of an eight or ten seat executive jet or military liaison aircraft the Dassault-Breguet Mystère 20 in December 1961. The Mystère 20 was a low-wing monoplane with two rear-mounted Pratt & Whitney JT12A-8 engines. The prototype, registered F-WLKB, first flew on the 4 May 1963 at Bordeaux-Merignac. Under the influence of Pan American the aircraft was re-engined with two General Electric CF700 engines and some dimensions were increased. Pan American signed a contract to distribute the Mystère 20 in the western hemisphere and ordered 40 aircraft with options on 120. The re-engined aircraft first flew on 10 July 1964. The first production aircraft flew on 1 January 1965 and both French and American certification was awarded in June 1965. Deliveries began to the Pan American outfitting facility at Burbank Airport, California. In 1966 the company re-designated the American-delivered aircraft as the Fan Jet Falcon, this later became the Falcon 20. Military orders from Australia and Canada were received. All non-American aircraft were fitted out before delivery at Bordeaux-Merignac. In 1967 Pan American Business Jets Division increased their firm orders to 160 aircraft.

Some Falcon 20s powered by General Electric CF700 engines were reengined with Garrett TFE731 engines under AMD-BA Service Bulletin No. 731.[1] These aircraft were redesignated with a "-5" after the model number. Volpar, Inc. worked on a program to reengine Falcon 20s with the Pratt & Whitney Canada 305 engines[2], but the program was abandoned before a FAA STC was awarded.[3]

The improved Falcon 200 featured more advanced jet engines and other major improvements to increase range, capacity and comfort. The aircraft proved to be so popular that production did not end until 1988, being superseded by more advanced developments of the Falcon family. The United States Coast Guard operates a model called the HU-25 Guardian which is used as a high-speed spotter aircraft to locate shipwreck survivors and direct slower-moving aircraft and rescue vessels, and interdict aerial and shipborne drug trafficking. The Falcon 20G, HU-25 and Falcon 200 were powered by Garrett ATF3 engines.

Later developments of the Falcon 20 include the smaller Falcon 10, the larger 30-seat Falcon 30 (not developed) and Falcon 50, an improved three-engined development. 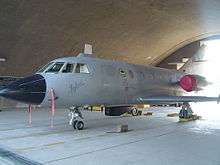 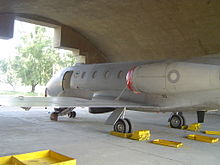