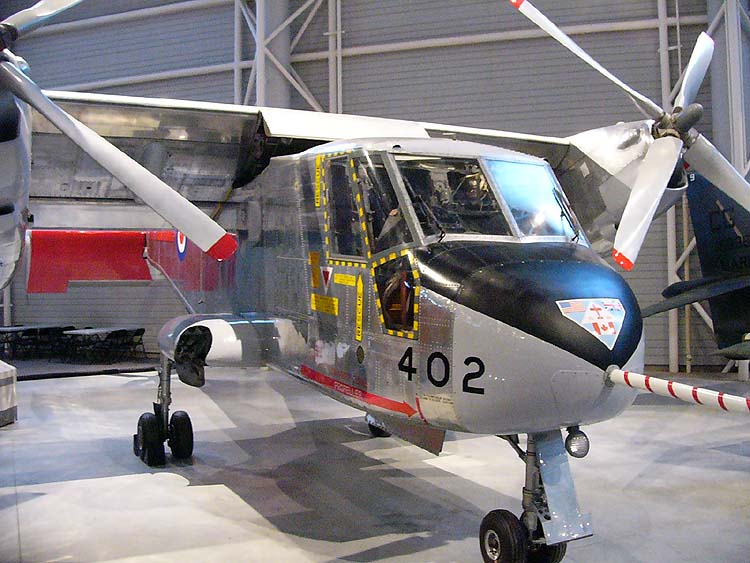 The Canadair CL-84 was a turbine tilt-wing monoplane designed and manufactured by between 1964 and 1972. Only four of these experimental aircraft were built with three entering flight testing. Two of the CL-84s crashed due to mechanical failures, but no loss of life occurred as a result of these accidents. Despite the fact that the CL-84 was very successful in the experimental and operational trials carried out between 1972 and 1974, no production contracts resulted.

Between 1957 and 1963, Canadair carried out research in VTOL (vertical takeoff and landing) technology with the assistance of the National Research Board (NRB) and the Defense Research Board (DRB) of Canada. [ Pickler and Milberry 1995, p. 196.] The studies pointed the way to a unique tilt-wing design. The wing and the powerplants of the aircraft could be tilted hydro-mechanically (recirculating ball actuator) so that the wing incidence changed through 100 degrees from a normal flight angle to those for and . The incidence of the tailplane (or stabilizer) was automatically altered to deal with trim changes as the wing-incidence varied. The two sets of blades were locked in a fore and aft position in conventional flight.

Contra-rotating rotors on a vertical axis in the tail provided fore-and-aft (pitch) control during hovering and transitional flight. The propulsion and lifting propellers were handed (ie revolved in opposite directions) and were interconnected by shafts through a central gearbox from which the tail rotors and accessories were also driven. The thrust from the propellers was matched automatically except when over-ridden by the pilot for lateral (roll) control in slow or hovering flight. A mechanical "mixing" unit was used to adjust the functions of the various controls in the different modes of flight. The flap/ailerons gave yaw control when hovering. In the cockpit fore and aft stick was always pitch, side to side was always roll and the rudder pedals were always yaw, irrespective of the wing position through its full range.

Two 1,500 shp Lycoming T53 shaft-turbines were used to drive the two 14 ft four-bladed propellers. The engines were interconnected by cross shafts, so that in the event of the failure of one engine, it automatically disconnect (through torque spring clutches) and both propellers would be driven by the remaining engine.

There were two main reasons for the technical success of the CL-84 design. Aerodynamic considerations were given a very high priority, and the controlling of power was kept as simple and direct as possible.

The propeller disks extended slightly beyond the wingtips, so the whole of the wing (except for the portion above the fuselage) was immersed in the propeller slipstream. This, together with full-span leading edge and trailing edge flaps which were programmed with wing tilt angle, ensured that the wing was never stalled. Trim changes were minimized by programmed tilting of the tailplane. All programming was based on extensive testing in the wind tunnel and on an outdoor mobile test rig.

The only unfamiliar control function the pilot had to deal with was the wing tilt control, which was a switch on the power lever (and took the place of controlling the flaps). The combination of smooth aerodynamics and simple power control made it easy for fixed-wing pilots to perform transitions between hover and wing-down modes on their first flight in the CL-84.Or|date=April 2008

"CF-VTO-X", the CL-84 prototype first flew in hover on , flown by Canadair Chief Pilot Bill Longhurst. On , after 305 relatively uneventful flights, "CF-VTO-X" was at 3,000 ft when a bearing in the propeller control system failed. Both pilot and observer successfully ejected but the prototype was lost. Canadair redesigned its replacement, the CL-84-1 incorporating over 150 engineering changes including the addition of dual controls, upgraded avionics, an airframe stretch (1.6 m, 5 ft 3 in longer) and more powerful engines (boosted by 100 hp).

The first newly designed CL-84-1 ("CX8401") flew on with Bill Longhurst again at the controls. He continued with the CL-84 program until his retirement from active flying in January 1971. Doug Atkins then assumed the role of chief test pilot. At about the same time, at the height of the Vietnam War, the US Navy expressed interest in the concept. Atkins was dispatched on a cross-country tour that took a CL-84-1 to , , and eventually full-blown trials on the USS "Guam". The CL-84-1 performed flawlessly, demonstrating versatility in a wide range of on-board roles including troop deployment, radar surveillance and anti-submarine warfare.

The potency of the CL-84-1 as a gun platform was dramatically accentuated in a Canadair promotional film. Fitted with a SUU 11A/A pod with a 7.62 mm mini-gun, Adkins maintained a rock-steady position as he sprayed a ground target. The rotating six-barrel “Gatling” gun delivered 3,000 rounds per minute, ripping up the target.

Continuing Tripartite trials by Canadian, US (Navy/Marine) and RAF evaluation pilots at the US Navy’s Patuxent River Experimental Test Center showed that the CL-84-1 was a suitable multi-mission aircraft. RAF Ron Ledwidge became the first to make a descending transition from hovering to conventional flight and back to hovering while on instruments.

On 1973, the first CL-84-1 was lost when a catastrophic failure occurred in the left propeller gearbox in a maximum power climb. The US Navy and US Marine pilots aboard ejected safely. Canadair representatives were sure something was wrong – the entire propeller and supporting structure of the gearbox had broken away during the climb. It was rumoured that the pilots had attempted to set an unauthorized climb record to 10,000 ft to take that distinction away from the that had held it. The second CL-84-1 ("CX8402") was rushed stateside to complete the Phase 2 trials onboard the USS "Guadalcanal". In the face of gale storm conditions, the "84" performed magnificently in tasks such as ferrying troops and “blind-flight.” Phase 3 and 4 trials proceeded immediately after, but, despite rave reviews from over 40 pilots, the CL-84-1 did not land any production contracts. [ Boniface 2000, p. 76-77.]

The end of the meant a scaling back on military requirements, but Canadair designer Fred Phillips had been cognizant of other factors gravitating against the "84." The first and most crucial was the “NBH” (not built here) factor; Canada had overcome it with other sales to the US military but the , Otter and Caribou loomed as exceptions to the rule. It was also "a prop job in the age of jets" and, lastly, the CL-84 "tilt-wing" concept did not have a "grand champion" who would fight for it in boardrooms and military procurement offices. Canadair had tried to sell the Dynavert to others – , Holland, , and the were all courted, but, in the end, the Canadair CL-84 died in 1974 for lack of interest, not even in Canada. [ Boniface 2000, p. 78.]

Some 30 years later, the present-day VTOL aircraft has revived the convertiplane concept, although, unlike the tilt wing of the Canadair CL-84, it utilizes a tilting engine design. [ Laissus, Jean-François. The CL-85 Dynavert: Canada’s Convertiplane. [http://www.aafo.com/news/old/dynavert.htm] Access date: 15 March 2007.]

A prototype and three evaluation aircraft had been built. The three CL-84s that flew made a total of over 700 flights and were flown (besides Canadair test pilots) by 36 pilots from Canadian, UK and US civil and military agencies.

The two surviving CL-84s ended up in museums: "CX8402" resides in the in Ottawa alongside another faded dream of technological greatness in Canada – the , "CX8403" was never flown; it was donated to the . Shipped as two main sections: fuselage and wings, the last CL-84 has never been restored and only the fuselage sits forlornly in the main display gallery. Visitors sometimes take time to read the display that tells the story of one of Canada’s greatest achievements in V/STOL development and wonder “what if?” [ Zuk 2004, p.38.]