A benefit concert or charity concert is a concert, show or gala featuring musicians, comedians, or other performers that is held for a charitable purpose, often directed at a specific and immediate humanitarian crisis. Such events raise both funds and public awareness to address the cause at issue.

Benefit concerts typically feature popular performers working for little or no pay. The largest such effort in recent memory was the multi-venue Live 8 concert organized in 2005 by Bob Geldof and Bono,and the Live Earth concerts organized by Al Gore and Kevin Wall on 07/07/07 who have been involved in several other similar events. [1] [2] Benefit concerts were also arranged following the September 11, 2001 attacks, the 2004 Indian Ocean earthquake and Hurricane Katrina.

There are various ways by which additional revenue and awareness for the charitable cause is raised - over and beyond the original event. These methods have included theatrically released concert films, live television, radio and internet broadcasts, audio recordings and home video releases of performances.

The perceived importance of the cause can lead musicians to temporarily set aside disagreements that had led to estrangements. Examples of this include the one-time reunion of Roger Waters with Pink Floyd for their 2005 Live 8 performance; and the first post-break-up reunion of Simon and Garfunkel at a 1972 concert in support of presidential candidate George McGovern.

There have been benefit concerts dating back to the eighteenth century, a notable example is the one held on December 28, 1791 for the benefit of Mozart's family after his death on the 5th of the month. Many prominent musicians of the day attended and performed his works.

In chronological order, beginning with the earliest date:

April 1-April 3, 1976. Amnesty International staged the first in what became its long-running Secret Policeman's Ball series of events raising funds for - and awareness of - the human rights issue. The show titled A Poke in the Eye was staged at Her Majesty's Theatre in London over three consecutive nights. It was primarily a comedy gala starring Monty Python, Peter Cook, Beyond The Fringe and others. Produced by John Cleese and Martin Lewis.

September, 1979 The No Nukes concerts in New York

December 26-December 29, 1979 - The Concerts for Kampuchea were held at the Hammersmith Odeon, benefitting the citizens of Cambodia who were victims of the tyrannical reign of dictator Pol Pot. 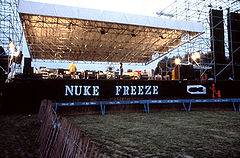 June 12, 1982 - In NYC, 750,000 people marched from the UN to Central Park to protest nuclear weapons — in what was probably the largest single protest in U.S. history. New York City was shut down for the day. The concert featured Jackson Browne, Linda Ronstadt, Bruce Springsteen, etc. Keith Haring created a poster for the event which was handed out free to the audience and John Fekner stencils were on the site.

July 13, 1985 - The Live Aid benefit concerts - conceived and organized by Bob Geldof - took place in London and Philadelphia. Similar concerts were held in Sydney and Moscow.

September 22, 1985 - The first Farm Aid concert, organized by Willie Nelson and John Mellencamp to raise money for family farmers in the United States, was held in Champaign, Illinois. There have been 19 Farm Aid concerts as of 2007.

May 17, 1986 - The Self Aid concert held in Dublin, Ireland aimed to highlight the chronic unemployment problem in Ireland at the time. Performers at the event included U2, Van Morrison and The Pogues.

June 4-June 15, 1986 The Conspiracy of Hope US tour of six rock concerts for Amnesty International. Performers included U2, Sting, Joan Baez, Lou Reed, Jackson Browne, The Neville Brothers and, at the final three concerts, a reunion of The Police.

March 15, 1986 - The Heart Beat 86 concert was held near Birmingham England to raise money for the Birmingham Children's Hospital.

September 21, 2001 America: A Tribute to Heroes was a telethon in the style of a benefit concert organized in the aftermath of the September 11, 2001 attacks on the World Trade Center and The Pentagon by the four major United States television networks.

October 20, 2001 The Concert for New York City was a benefit concert organized as a tribute to the heroes and survivors of the September 11, 2001 attacks on New York. It was initiated by Paul McCartney and produced by a team including Harvey Weinstein and Jann Wenner

July 30, 2003, 450,000 spectators saw The Rolling Stones, AC/DC, Rush, The Guess Who, and others at the largest concert in Canadian history, the The SARS Benefit Concert concert in Toronto, Ontario, Canada, held to prove that the city was safe from SARS.

July 2, 2005 - Bob Geldof and Bono organised Live 8, a set of 8 concerts held in 8 cities around the world on the same day - as part of a campaign to persuade the G8 member governments to increase their fight to eradicate poverty in third-world countries.

July 7, 2007 - Al Gore inspired and helped organize Live Earth. During its first year, it consisted of a series of concerts held on all 7 continents of the planet on the same day.

5 December 2008 - Anoushka Shankar and Jethro Tull held A Billion Hands Concert in Mumbai, India. All proceeds from the concert went to victims of the November 2008 Mumbai attacks.[1]

Parodies and other references

Like other notable cultural phenomena, benefit concerts have been the subject of parody. For example, a South Park episode, Chef Aid, features a concert held for the benefit of the character Chef, featuring performances by Elton John, Ozzy Osbourne, and Meat Loaf.