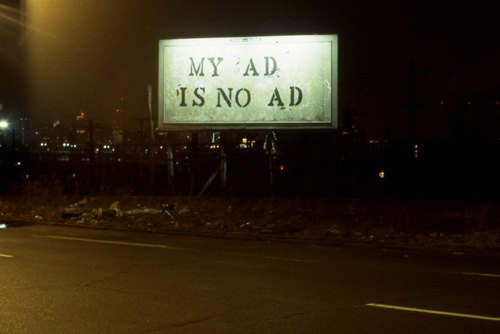 
John Fekner (b. ), is a street and artist, who in the 1970s created hundreds of environmental and conceptual outdoor works consisting of stenciled words, symbols, dates and icons spray painted throughout . Fekner's output includes paintings, cast paper reliefs, video, audio and performance works, sculpture, and computer-generated work. Throughout his thirty-year career in the arts, Fekner has made a commitment within his work by consistently addressing issues that demonstrate an interest involving concepts of perception and transformation, as well as specific environmental and sociological concerns such as , , chemical pollutants, and Native American Indians. Fekner creates multiple versions of work in entirely different media and will use whatever means are necessary to communicate a vision or message, and whose work changes as that vision expands. [ Gumpert, Lynn, Curator, "New Work New York at " Exhibition catalog essay, January 30-March 25, 1982. p. 12-15]

Fekner attended , a Catholic elementary school in together with a.k.a. of the . Fekner began writing poetry as a young teenager, and his first outdoor in 1968 were the words "" painted at Gorman Park 85th Street Park in Jackson Heights, Queens. Along with a few buddies on the park house roof, he painted the phrase in large white letters across the front of the building. Fekner appropriated the name of the popular hit written and recorded by the about a park in , . Subsequently, the Jackson Heights local football team took the name, "Itchycoo Chiefs" in the 70s. Ten years later, Fekner used the park as a base for his stencils projects. In May 1978, he curated the "Detective Show" with help from the Institute for Art and Urban Resources (). A group of thirty artists including , Don Leicht, Lucio Pozzi, Lou Forgione, Richard Artschwager and Claudia De Monte hid art and created site-specific subtle art work throughout the park. [Interview with John Fekner via webcam, email and written transcription ("in progress") for doctoral thesis June 21 and August 13, 2007 ]

Fekner's "Warning Signs" project focused on accentuating deteriorating conditions that dominated and its environs in the 70s. In 1976, Fekner began to create ‘word-signs’ using hand cut cardboard and spray paint on a relentless crusade concerned with social and environmental issues. First seen on the industrial streets and highways of , the bridges, and later in the , his ‘messages’ were spray painted in areas that were in need of construction, demolition or reconstruction. By labeling the structures, Fekner's objective was to draw attention to the accumulated squalor by urging city officials, agencies and local communities to be more responsible and take action. His first stencil projects, "Industrial Fossil", "Urban Decay," "Decay/Abandoned", "Instant This Instant That", and "The Remains of Industry" were not intended to remain for long periods of time. The projects succeeded when the existing condition was removed or remedied. [Fekner, John (1982). John Fekner: Queensites. Sweden: Wedgpress and Cheese. ISBN 9185752320.] In 1979, Fekner began experimenting with video and audio. He worked with Fred Baca on "Environmental Stencils 77-79", a grainy, grim black & white 8mm film/video that not only documents Fekner's stencil projects, but is also a bleak portrait of New York City in ruins.

Fashion Moda is most often associated with graffiti art and its acceptance into the art world through such figures as Fekner, , , and . [FASHION MODA: A BRONX EXPERIENCE by Professor Sally Webster, 1996, http://www.lehman.cuny.edu/gallery/talkback/fmwebster.html] In February 1980, Fekner began working in, around, and out of Fashion Moda, a storefront for experimental art and cultural exchange, and an outpost for showcasing , and . Through his association with Fashion Moda, Fekner went to Charlotte Street and stenciled six spray painted messages including "Decay, Broken Promises, Falsas Promesas, Last Hope, Broken Treaties and Save Our School". When Presidential Candidate stood in front of Fekner’s stencils, "Decay" and "" on Charlotte Street in the South Bronx on August 5th, 1980 at the People's Convention, Fekner detoured away from the notoriety to explore a new found interest in multimedia art.

In 1981 Fekner was invited by to experiment on the early interactive system at ’s . AMC evolved into the under the leadership of and . Fekner received his first international award at 's Video Culture Festival in the category for his "Toxic Wastes From A to Z", a created at AMC which featured a by k-8 students from a South Bronx school. In the New York Times, Matthew Mirapaul said, "Fekner's work incorporates jagged, pixilated computer-generated imagery because 'its characteristic of the medium....it's almost like the drip in a ,' Mr. Fekner stated." [Mirapaul, Matthew "A Brush, a Mouse, a Canvas: Mixing Paint and Pixels" New York Times . New York, N.Y.: Jun 13, 2001. p. H15 (1 page). ]

Collaborating with Bronx artist Don Leicht in 1982, they produced a series of art objects and installations using cut metal, aluminum and automotive paints based on Nishikado's arcade game with the statement: "Your Space Has Been Invaded-Our Children are Fighting a Terrible War. Whole families are being sent to Battlescreen." Since the 70s, Fekner continues to collaborate with Don Leicht; most recently at the 's "11 Spring Street" exhibition in NYC. Through the years, Fekner has collaborated with artists like , aka Crash, , Sandra Seymour, , Jim Recchione, Steve Grivas, Andrew Castrucci, Sasha Sumner and other musicians, writers and new media artists. Fekner’s work was included in 7 as part of 's and Stefan Eins' Fashion Moda Store, and the "Committed To Print" exhibition at the .

A multi-disciplinary artist, Fekner formed his own band City Squad in 1983. City Squad was comprised of musicians and non-musicians as an extension of Queensites, teenagers from who assisted with the outdoor stencil work. In September, Fekner released his first rap/rock 12" EP on his own Vinyl Gridlock record label. The A-side, "2 4 5 7 9 11" had Kwame Monroe, aka "Bear 167", a South Bronx artist as the guest rapper; and B-side had Dave Santaniello on rock vocals on "Rock Steady". On the , Fekner experimented with early speech synthesis programs, and SAM- as vocal tracks on "2 4 5 7 9 11" and on his "Idioblast" album in 1984. In addition to playing keyboards, electronic drums and vocals, he wrote the music and lyrics for the eight songs on the album which featured extensive sampling and tape loops of tv, radio, Native American voices, phone and airport transmissions over rock/rap/ beats. Tracks on the album included "Travelogue The 80s", "I Get Paid To Clap", "The Beat", "The Sight Of The Child"," Wheels Over Indian Trails" and "Rapicasso", which Fekner also created as a 6' x 12' six-panel painting. Both the painting and song pay homage to ’s "". Fekner spray painted -style letters on industrial silkscreens to portray three breakdancers, the song’s lyrics acknowledging the work, energy and spirit in breakdancing, rapping and graffiti: "Watch the street, see the modern art, it’s the present and future tied to his heart." [ "Rapicasso" from the album "Idioblast" Vinyl Gridlock Records 10541-A, ASCAP. © 1984-2007 Words and Music by John Fekner/Courtesy Estate of John Fekner/Drama Design Music Publishing Company, ASCAP all rights reserved.]

The 12" EP single, "Concrete People/Concrete Concerto", ["http://www.youtube.com/watch?v=enN8285TEcc "] was a music collaboration with Dennis Mann and Al Belfiore who programmed the Drum Computer. Fekner recorded at Mann's Monkey Hill Studios from 1983-1989 where the , whose "", considered to be the first commercially released rap single in 1979, were also recording. On both "Concrete People/Concrete Concerto", Fekner worked with musicians Sasha Sumner (sax), Jim Recchione (harmonica), Sandra Seymour (vocals), Sandy Mann (vocals) and Andrew Ruhren (animator and EP cover illustration). Concrete People was a popular dance club video, shown on USA Network NightFlight's "Salute to Animation" with 's "Sledgehammer", "And She Was" and 's "The Future's So Bright I Gotta Wear Shades". "Concrete People" and "The Last Days of Good and Evil" ["http://www.youtube.com/watch?v=JFR0pAq-fGc "] ("Concrete Concerto" soundtrack) both won honorary awards in the 's category, together with award winner for his "" and "" in 1987 and 1988 respectively. [Interview with John Fekner via webcam, email and written transcription ("in progress") for doctoral thesis June 21, 2007 ]

art critic John Russell wrote…Fekner is an artist who works not only in New York but with New York. The city in its more disinherited aspects is the raw material with which he has been working ever since he got a studio space in in in 1976 and learned to regard the huge dilapidated building as "an elderly person who has acutely perceived his experience of life." He went on to work outdoors in Queens and in the Bronx in ways that gave point and urgency to places long sunk in despair. With a word or two ("Decay", for instance, or "Broken Promises"), he brought an element of street theater into disaster areas. With a single stenciled phrase ("Wheels Over Indian Trails," for instance) he mingled present with past on the side of the near the . What in other hands might have been vandalism had a salutary effect. People in desolate parts of the city saw more, felt more, thought more and came out of their apathy. [Russell, John "Art: 'New Work New York' at " March 19, 1982. p. C24 (1 page).]

The Wooster Collective said, "For us, John Fekner's pioneering stencil work is as important to the history of the urban art movement as the work of artists like Haring, Basquiat. It was artists like Fekner, Leicht, Hambleton and others who truly held down the scene back in the early 80's." [ [http://www.woostercollective.com/2007/01/catching_up_with_john_fekner_and_don_lei.html "Catching Up With John Fekner and Don Leicht"] , woostercollective.com, . Retrieved .]