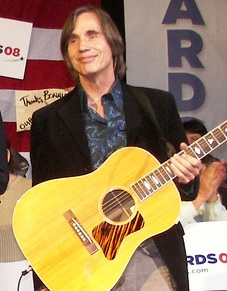 Clyde Jackson Browne (born , ) is a German-born American rock and . His introspective lyrics made him the for the confessional movement of the late 1960s and early 1970s. In 2004, Browne was inducted into by fellow American musical artist and good friend, . In the same year, Browne received an honorary of from ' for "a remarkable musical career that has successfully combined an intensely personal artistry with a broader vision of social change and justice". [cite web|url=http://www.jacksonbrowne.com/biography/default.aspx|title=Jackson Browne :: Biography|accessdate=2008-05-21|publisher=JacksonBrowne.com]

Early life and songwriter for others

Browne was born in , , where his father, an American serviceman, was stationed. Jackson's mother, Beatrice Amanda (née Dahl), was a Minnesota native of Norwegian ancestry.

A precociously gifted songwriter, Browne signed a publishing contract with Nina Music, and his songs were performed by , , the , , and Steve Noonan, among others. After moving to , , Browne was briefly in 's back-up band. He also worked on 's "Chelsea Girl", both by playing guitar and penning the classic song "These Days". After leaving , Browne formed a folk band with Ned Doheny and Jack Wilce. Except for this short period of living in , Browne has, to this day, lived in .

In 1971, Browne signed with and released "Jackson Browne" (1972), which included the piano-driven "", a Top 10 hit in the US singles chart. "Rock Me on the Water", from the same album, also gained considerable radio airplay, while "Jamaica Say You Will" and "" helped establish Browne's reputation as a versatile and original writer with a deep thinking, sometimes downbeat, but always romantic flair. During this period, he also toured with .

His next album, "" (1973) — while considered of high quality — was less successful than his debut album, although it still sold a million copies. The upbeat "," co-written with The Eagles' , had already been a big hit for that group, while "These Days" (actually written by Browne and first recorded by Nico in 1967) captured the essence of Browne's youthful, morose angst. The title track, meanwhile, was the first of Browne's studies of personal exploration, soul-searching, and despair set against the backdrop of a decaying society.

"" (1974) consolidated Browne's following, with some fans drawn in purely by the record's intriguing, -inspired cover. Highlights included the searching, heartbreaking title song, the elegiac "For a Dancer" and the apocalyptic "Before the Deluge". The arrangements featured the evocative and of David Lindley, Jai Winding's outstanding piano, and the stellar harmonies of Doug Haywood. The title track was also featured in 's film "". Around this time, Browne began his fractious but lifelong professional relationship with singer/songwriter , mentoring Zevon's first two Asylum albums through the studio as a producer after browbeating Asylum head into giving Zevon a recording contract.

Browne's disaffected, wondering character struck out even more starkly in his next album, "The Pretender", which is arguably his darkest and yet musically and lyrically his brightest. It was released in 1976, after the suicide of his first wife, Phyllis Major. The album features stronger production by and a mixture of styles, ranging from the -inspired peppiness of "Linda Paloma" to the country-driven "Your Bright Baby Blues" to the near-hopeless sadness and surrender of "Sleep's Dark and Silent Gate". The title track "The Pretender" is Browne's "", a vivid account of romanticism losing the battle with the realities of day-to-day life. "Here Come Those Tears Again" was cowritten with Nancy Farnsworth, the mother of Browne's wife, after the untimely death of her daughter.

By then, Browne's work had gained a reputation for its compelling melodies, clear, honest, and insightful lyrics, and a flair for composition rarely seen in the world of rock and roll. He was often referred to as "a thinking man's rock star."

Browne began recording his next LP while on tour, and "Running on Empty" (1977) became his biggest commercial success. Breaking the usual conventions for a , Browne used all new material and combined live concert performances with recordings made on buses, in hotel rooms, and back stage, creating the audio equivalent of a road movie. "Running on Empty" contains many renowned songs, such as the propulsive title track, "Running on Empty", "The Road" (written and recorded in 1972 by ), "Rosie", and "/Stay" (Browne's affectionate and knowing send-off to his concert audiences and roadies).

Browne has been married twice and has two children. His first wife was actress/model (1946-1976). The two began their relationship around 1971, as was artistically memorialized in the song "Ready or Not". Their son, Ethan Zane, was born in 1973. Phyllis and Jackson married in late 1975. He was devastated when she committed suicide by taking an overdose of sleeping pills just a few months later, in March of 1976, at the age of 30.

He was in a relationship with from 1978 (when she was 18) through 1992 with the exception of his January 1981 marriage to Australian model, with whom he had a second son, Ryan Daniel, born in 1982. Jackson and Lynn were divorced in 1983 and he continued with Hannah until she left him for . He has been in a relationship with artist since the mid '90s.

Shortly after the Three Mile Island nuclear accident in March 1979, Browne joined with several musician-friends to found the organization, . His next album, "" (1980), was commercially successful — his only number 1 record on the U.S. pop albums chart. The following year he released the single "" from the "" soundtrack, which became his biggest hit, peaking at #7 on the . The 1983 "" followed, signaling a discernible change from the personal to the political in his lyrics.

came to the fore in Browne's music in the 1986 album, "", an explicit condemnation of Reaganism and U.S. policy in . Flavored with new instrumental textures, it was a huge success with Browne fans, though not with mainstream audiences. The title track, "Lives in the Balance", with its Andean pan pipes — and lines like, "There's a shadow on the faces / Of the men who fan the flames / Of the wars that are fought in places / Where we can't even say the names" — was a " [http://en.wiktionary.org/wiki/cri_de_coeur cri de coeur] " against U.S.-backed wars in , , and . The song was used at several points in the award-winning 1987 documentary, "The Secret Government: The Constitution in Crisis," by journalist , and was part of the soundtrack of "Stone's War", a 1986 "" episode focusing on American involvement in Central America.

During the 1980s, Browne frequently performed at benefit concerts for causes he believed in, including ; (making several appearances on the 1986 ); post-, ary Nicaragua; and the . The album, "World in Motion", released in 1989, was even more politically-oriented and polarizing and contains a remarkable cover of Steve Van Zandt's "I am a Patriot," a song which he has performed at numerous concerts.

In 1995 he performed in "" a musical performance of the popular story at Lincoln Center to benefit the . The performance was originally broadcast on Turner Network Television (TNT), and issued on CD and video in 1996.

Living off the grid and environmental activism

Four years after his previous album, Browne returned with "I'm Alive", a critically acclaimed album with a more personal perspective that had no hits but still sold respectably — indeed, the ninth track from the album, "Sky Blue and Black", was used during the pilot episode of the "". He also sang a duet with , "Unloved", on her 1995 album "". Browne's "" (1996) was released soon after, but was not as successful commercially. "" was released in 2002.

Browne was inducted into the in 2004. In his induction speech, [cite web|url=http://www.jrp-graphics.com/jb/rarhof.html|title=Jackson Browne - Rock And Roll Hall of Fame|accessdate=2008-05-21] noted that while the Eagles got to the Hall first, "You [Browne] wrote the songs they wished they had written". The previous year, three of Browne's albums — "For Everyman", "Late for the Sky", and "The Pretender" — had been selected by "" magazine as among its choices for the 500 best albums of all time.

Browne appeared in several rallies for presidential candidate in 2000, singing "I Am A Patriot" and other songs. He participated in the tour in October 2004, playing a series of concerts in American . These concerts were organized by to mobilize people to vote for in the presidential election. Browne appeared with and , and once with . In late 2006, Browne performed with and at a fundraiser for Democratic candidates in . For the he endorsed for the Democratic Presidential Nomination and performed at some of Edwards' appearances.

"", was released in 2005 on . The album consists of live recordings of eleven previously released tracks and "", a song that does not appear on any of Browne's studio albums.

Browne's new studio album, "Time The Conqueror", was released in September 2008 via Inside Recordings, his first studio album since leaving longtime label Elektra Records in 2003.

In 2008, Browne contributed to an album called "", which is an initiative to support , and to underline the situation in Tibet. The album was issued on August 5 via and on August 19 in music stores around the world. [E-Online (, ) [http://uk.eonline.com/uberblog/b147502_sting_matthews_mayer_gamer_tibet_beijing.html Sting, Matthews, Mayer Gamer for Tibet Than Beijing] ]

Browne also covered 's "Oh My Love" to benefit Amnesty International's campaign to alleviate the crisis in . The song appears on the album , which was released on June 12, and features many other prominent artists performing other Lennon covers, such as , , , , and the .

For "promoting peace and justice through his music and his unrelenting support for that which promotes nonviolent solutions to problems both nationally and internationally", Browne received the Courage of Conscience Awards from The Peace Abbey in Sherborn, Massachusetts. [cite web|url=http://www.peaceabbey.org/awards/cocrecipientlist.html|title=The Peace Abbey Courage of Conscience Recipients List|accessdate=2008-05-21]