Leka is a municipality in Nord-Trøndelag county, Norway. It is part of the Namdalen region. The administrative centre of the municipality is the village of Leknes. Other villages include Sør-Gutvika and Madsøygrenda. 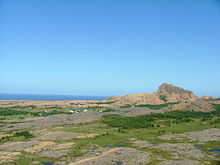 Leka island has a unique geology

Primarily a fishing and farming community, Leka is the northernmost municipality in Trøndelag. The island has been inhabited for at least 10,000 years, as evidenced by cave drawings in the Solsem section of the island.

The Old Norse form of the name was Leka. The meaning of the name is unknown, but it may come from the word lekke which can mean "gravelly ground".[3][4]

The coat-of-arms is from modern times; they were granted on 21 April 1989. The arms show the golden wing and claw of an eagle on a red background. (In 1932 a child disappeared on the island, and was refound by an eagles nest.)[5][3]

The Church of Norway has one parish (sokn) within the municipality of Leka. It is part of the Nærøy deanery in the Diocese of Nidaros.

Leka is an island municipality encompassing the main island of Leka, the western part of the island of Austra, and many other small islands in the surrounding area. The tiny island groups of Sklinna and Horta lie to the west of the main islands. Sklinna Lighthouse is located in the westernmost part of the municipality. Leka borders Vikna and Nærøy municipalities to the south and Bindal (in Nordland county) to the north.

In the 2007 municipal elections, Leka had the highest vote for the Centre Party in Norway, at 69.3 per cent.