Olde Fort Erie
This article is about the fort and historic site. For the nearby town, see Fort Erie, Ontario.

Fort Erie was the first British fort to be constructed as part of a network developed after the Seven Years' War (or in the United States the French and Indian War) was concluded by the Treaty of Paris (1763) at which time all of New France had been ceded to Great Britain. It is located on the southern edge of the Town of Fort Erie, Ontario, directly across the Niagara River from Buffalo, New York. [1] 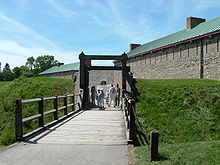 Side of the entrance

The British established control by occupying the French forts and by constructing a line of communications along the Niagara River and Upper Great Lakes. The original fort, built in 1764, was located on the Niagara River’s edge below the present fort. For the following 50 years, Fort Erie served as a supply depot and a port for ships transporting merchandise, troops and passengers via Lake Erie to the Upper Great Lakes. [1]

The fort first saw action as a supply base for British troops, Loyalist Rangers and Iroquois Warriors during the American Revolution. The little fort at the water’s edge suffered considerable damage due to continuous winter storms. In 1803, planning was authorized for a new Fort Erie on the heights behind the original post. The new fort was made more formidable being constructed of the Onondaga Flintstone that was readily available in the area.

Fort Erie was the site of the bloodiest battlefield in the history of Canada. This new fort was unfinished when the United States declared war on June 18, 1812. Part of the garrison of Fort Erie fought at the Battle of Frenchman's Creek against an American attack in November 1812. In 1813, Fort Erie was held for a period by U.S. forces and then abandoned on June 9, 1813. The fort had been partially dismantled by the small garrison of British troops and Canadian militia as they withdrew. British reoccupation followed American withdrawal from the area in December 1813. The British attempted to rebuild the fort. On July 3, 1814 another American force landed nearby and again captured Fort Erie. The U.S. Army used the fort as a supply base and expanded its size. At the end of July, after the Battles of Chippewa and Lundy’s Lane, the American army withdrew to Fort Erie and were besieged by the British. In the early hours of August 15, 1814, the British launched a four-pronged attack against the fortifications. A well-prepared American defence and an explosion in the North East Bastion destroyed the British chance for success with the loss of over 1,000 of their men. An American sortie on September 17 captured two of the British batteries and the American troops were able to spike the guns in one of them before being driven back to the fort. Shortly afterward, the British lifted the siege and retired to positions to the north at Chippawa. After an unsuccessful American attack at Cook’s Mills, west of Chippawa, news reached the American forces that the eastern seaboard of the U.S. was under attack. On the November 5, 1814, with winter approaching, the Americans destroyed the fort and withdrew to Buffalo. See Siege of Fort Erie. [1]

The Treaty of Ghent was signed December 24, 1814, ending the War of 1812. Fearing further American attacks, the British continued to occupy the ruined fort until 1823. Some of the stones from the fort were then incorporated into the construction of St. Paul’s Anglican Church, which stands today on the Niagara Parkway 3 km (1.9 mi) north of the fort.

The town of Fort Erie began to grow north of the fortifications when a rail terminus and station were constructed.

The Fort Erie area became significant as the major terminus in Canada for slaves using the Underground Railroad in the middle of the 19th century, many of whom crossed into Canada from Buffalo, New York.

In 1866, a brigade of Fenians (Irish Republicans) used the ruins of the old fort as a base for their raid into Ontario. The Fenian Brotherhood invaded Canada on June 1, 1866 with more than 500 American Civil War veterans by crossing the Niagara River a little north of Fort Erie. Their first order of business was to occupy the town of Fort Erie and demand food and equipment from the local population. The invaders offered Fenian bonds as payment but were refused by the townsfolk.

The Fenians then marched north to try and capture the town of Chippewa at the Niagara River exit of the Welland Canal. Before reaching their goal, and discovering a British and Canadian force had reached the town before them they turned to face a weak Canadian militia brigade that was approaching Fort Erie from the west, routing it at the Battle of Ridgeway. The Fenians returned to Fort Erie where they defeated a second small force of local Canadian militia, including a naval detachment from Dunnville. Unable to get reinforcements across the river and concerned over the approach of a large number of Canadian Militia and British regulars, the Fenians retreated from Fort Erie for Buffalo.

Around the same time visitors to the ruins included the Prince of Wales and Mark Twain. As the 20th century approached, the Old Fort was used as a park and picnic area by local families.

Redevelopment of the fort 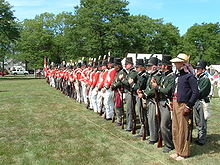 Preparations for a reenactment 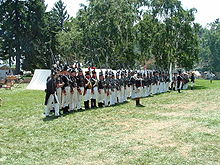 The reconstruction of the fort was started in 1937. The reconstruction was jointly sponsored by the Provincial and Federal governments and the Niagara Parks Commission. The fort was restored to the 1812-1814 period and officially reopened on July 1, 1939. During the restoration, a mass grave of 150 British and 3 American soldiers was uncovered and currently lies beneath a monument which was originally erected in the fort's ruins in 1904. The fort and surrounding battlefield are owned and operated by the Niagara Parks Commission, a self-funded agency of the Ontario Provincial Government. The Parkway starts at Fort Erie and continues 56 km (35 mi) north to Lake Ontario. Sir Winston Churchill was quoted saying that the parkway was "the prettiest Sunday drive in the world." Each year, during the second weekend of August, hundreds of historical re-enactment enthusiasts come together to reenact the siege of Fort Erie.