Fort Erie, Ontario
This article is about the town in Ontario. For the nearby fort and historic site, see Fort Erie.

Fort Erie (2006 population 29,925) is a town on the Niagara River in the Niagara Region, Ontario, Canada. It is located directly across the river from Buffalo, New York.

Fort Erie is one of the fastest growing communities in Niagara, and has experienced a high level of residential and commercial development in the past few years. Garrison Road (Niagara Regional Road 3) is the town's commercial corridor, stretching east to west through Fort Erie.

Fort Erie is also home to a number of other commercial core areas (Bridgeburg, Ridgeway, Stevensville and Crystal Beach) as a result of the 1970 amalgamation of the latter three municipalities with Fort Erie proper.

The town's beaches on Lake Erie, most notably Crystal Beach and Bay Beach, are considered the best in the area and draw many weekend recreationists from the Toronto and Buffalo areas. While summers are enjoyable, winters can occasionally be fierce, with many snowstorms, whiteouts and winds whipping off Lake Erie. 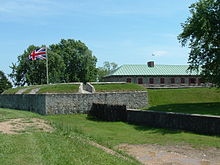 Modern settlement of the area was established when a British military fort, Fort Erie, was constructed in 1764. During the American Revolution it was used as a supply depot for British troops. When the War of 1812 started, the troops stationed at Fort Erie were caught off guard due to the fort being in the middle of rebuilding. The Americans held it for a time, fending off two British attacks. Later they destroyed Fort Erie and returned to Buffalo in the winter of 1814. The ruins remained until they were rebuilt through a depression era "work program" project, as a tourist attraction in 1939.

The former "Dolls House Museum", located on the Niagara River near downtown Fort Erie (Bridgeburg Station), was a supposed hiding place on the Underground Railroad for fugitive slaves in the 1800s. In 1866, the Battle of Ridgeway was fought here between invading Irish-Americans and the Canadian defenders.

On August 7, 1927 the Peace Bridge was opened between Fort Erie and Buffalo.

The city was also site of the Niagara Movement meeting at the Fort Erie Hotel in 1905. The movement later led to the founding of the NAACP.

Public transit is provided by the Town of Fort Erie Transit System, which operates 2 buses in the town.

Fort Erie has been the Niagara terminus of the Queen Elizabeth Way since the 1950s. Highway 3 cuts through the town east to west, and is a regional road between Rosehill Road and Central Avenue. Highway 3C (Dominion Road) existed until 1970, when it was downloaded to the newly-formed Regional Municipality of Niagara to become Niagara Road 1.

The recently released 2006 Census of Canada indicates a current population of 29,925 for Fort Erie. This is a 6.3% increase over the last Census (2001), and makes Fort Erie the fastest growing municipality in the St. Catharines-Niagara CMA (Census Metropolitan Area), and the third fastest growing municipality in the Region of Niagara. The median household income in 2005 for Fort Erie was $47,485.00, which is below the Ontario provincial average of $60,455.00.[2]

Erie Beach is a designated place in Canadian census data; it had a population of 199 in 2006.

Fort Erie Race Track has hosted live thoroughbred racing since 1897. Widely regarded as one of North America's most picturesque tracks, it has been home to the Prince of Wales stakes- the second jewel in Canada's Triple Crown of Racing since 1959.

An annual car show hosted by the Rods and Relics Car Club of Fort Erie that is usually held on a Sunday in the middle of June. The show always has an excellent turn-out and the proceeds support local charities. The event takes place on the south-east grounds of the Fort Erie Race Track.

The Friendship Festival is a week-long international celebration of the culture and heritage shared by Canada and the USA. The Friendship Festival occurs during the first week of July and celebrates both Canada Day and Independence Day. The events held both in Fort Erie, ON and in Buffalo, NY include free concerts and a spectacular fireworks display on July 1 highlighting the two national holidays. Other activities include arts, crafts, children's entertainment, heritage and cultural displays, and a midway.

Within the Town of Fort Erie, the Village of Ridgeway [www.ridgewayont.ca] offers Victorian charm to visitors and residents alike. The Ridgeway Summer Festival is held every year on the second weekend in July. The streets are closed off, and thousands of visitors stroll the historical downtown enjoying music, food, vendors, shows, and friendly atmosphere. An event called Spirit of Christmas is held on the first weekend in December, Friday evening and Saturday only, featuring horse-drawn carriage rides, school choirs singing outdoors, Victorian carollers, strolling Santa, food and more.

The Bridgeburg Car and Bike Show is held annually on the last Sunday in May. A strategic effort combining commercial revitalization, membership drive and fund raising, the event raises money for charitable disbursements by and moral supports for fire fighters at Fire Company #2 at Bridgeburg Station. Certain proceeds and all non-perishable food donations are raised directly for Community Outreach Program Erie (COPE), a referral agency and resource centre providing advocacy and emergency services such as food, clothing, diapers, prescriptions, and resume preparation. The event aims to introduce local residents and returning visitors to the variety of businesses at Bridgeburg Station. Open businesses, vendors, kids zone, nostalgia and modern flare make this a something-for-everyone event designed for family fun.

The Siege of Fort Erie is a historical re-enactment of the famous 1814 battle, which takes place during the second weekend of August. This battlefield was the bloodiest on Canadian soil due to the various sieges that took place throughout the War of 1812. The Siege of 1814 is vividly recreated every year.

Fort Erie is the location of the proposed Canadian Motor Speedway development. This large mixed-use development, located adjacent the QEW, will feature a 65,000 seat motor speedway and road course.