Nuclear power in the European Union 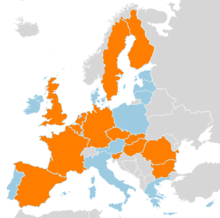 European Union countries employing nuclear energy for electricity generation are marked in orange. Those without nuclear power stations are shown in pale blue.

Nuclear power in the European Union accounted for approximately 15% of total energy consumption in 2005. The energy policies of the European Union (EU) member countries vary significantly. As of January 2010, 14 out of 27 countries have nuclear reactors. The countries with reactors are: Belgium, Bulgaria, Czech Republic, Finland, France, Germany, Hungary, Netherlands, Romania, Slovakia, Slovenia, Spain, Sweden, and the United Kingdom.[1] France and Finland embrace nuclear technology, new EPR reactors are being built there. In the wake of the Fukushima disaster, Switzerland and Germany decided that they will phase out nuclear energy in the first years of the 2020s.[2] 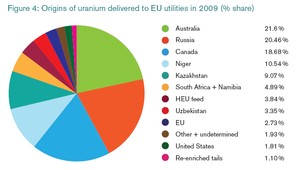 Sources of uranium delivered to EU utilities in 2009, from the 2009 Annual report of the Euratom Supply Agency

In 2009, only 3% of the uranium used in European nuclear reactors was mined in Europe. Australia, Russia, Canada and Niger were the largest suppliers of nuclear materials to the EU, supplying more than 70% of the total needs in 2009[8]

European nuclear policy is governed by the EURATOM treaty. Therefore regular EU policy, on for example environment or the market does not apply to issues in the nuclear field. The nuclear policy is mainly in the competence of the member states. In the EU level, DG ENER is the main authority for EU nuclear issues.

The European Council is the locus for intergovernmental decisions. The European Parliament does not have authority in the field of nuclear other than the right to ask questions to the European Commission.

In case of a radiological emergency, the EU will trigger its ECURIE alert system, which immediately notifies all national authorities of an impending nuclear hazard. This system was installed after the experience with the Chernobyl disaster.

The FP7 research program has a special branch which is governed under the EURATOM treaty, which deals with community research into nuclear issues. The European Commission is owner of the high flux reactor (HFR) in Petten, NL.

In November 2007 the European Nuclear Energy Forum (ENEF), or the Bratislava/Prague forum, was launched to bring the policy on nuclear issues in the EU forward. The forum has working groups on "Risks", "Transparency" and "Opportunities". Policymakers, industry and NGOs are participating.

At present, the European Commission is investigating the issue of Nuclear liability, and is seeking how to harmonise the Vienna Convention on Civil Liability for Nuclear Damage and the Paris Convention on Third Party Liability in the Field of Nuclear Energy, as the differing caps on liability constitute a distortion of competition between operators in members states.

The Commisisons's SET plan mentions the "sustainable nuclear fission initiative" to develop Generation IV reactors as one of the research priorities of the European Union.

On average, the EU creates about 40,000 cubic meters of radioactive waste per year. Eighty percent of that is short-lived low-level radioactive waste.[10] France and the United Kingdom are currently the only EU countries that reprocess waste. However, the reprocessing of spent fuel in the UK is being phased out but is expected to continue in France. The countries that currently use this reprocessed fuel (MOX) include Germany, Belgium, France and Switzerland.[11] Reprocessing spent fuel significantly decreases its volume and extracts plutonium from it. Although plutonium is commonly associated with nuclear weapons, the plutonium extracted with reprocessing is not suitable for 'classic' nuclear weapons.[12]

The EBRD is financing the decommissioning of old nuclear plants in Bulgaria, Lithuania and Slovakia.[13]

EU memberstates Austria, Ireland, Netherlands, Poland, Slovakia, Bulgaria, Italy, Lithuania, Romania, and Slovenia are working since January 2009 together in the European Repository Development Organisation (ERDO) to address common issues on nuclear waste storage.[14] This working group is led by ARiUS from Switzerland and facilitated by COVRA, waste management organisation, from the Netherlands.[citation needed]

ERDO was working early 2010 on a plan to dump European nuclear waste somewhere in Eastern Europe.[15]

"Some 7,000 cubic meters of high-level nuclear waste are produced across the EU each year. Most Member States store spent fuel and other highly radioactive wastes in above-ground storage facilities that need continuous maintenance and oversight and are at risk of accidents, such as airplane crashes, fires or earthquakes. Hungary and Bulgaria currently ship nuclear waste to Russia."[16]

In 2007 a "High level group on safety and waste management", a body with nuclear regulators from all EU member states, discussed if and how nuclear regulation in the European Union could be harmonised.[citation needed]

On July 19, 2011, the European Commission adopted a Directive for regulating and handling nuclear waste in the EU.[17] "Exports to countries outside the EU is allowed under very strict and binding conditions: The third country needs to have a final repository in operation, when the waste is being shipped. Such a repository for highly radioactive waste is internationally defined to be a deep geological repository. At present, such deep geological repositories do not exist anywhere in the world nor is a repository in construction outside of the EU. It takes currently a minimum of 40 years to develop and build one."[17]

The European nuclear industry is working to develop Generation IV nuclear reactors. Foratom is a Brussells based trade organization that bills itself as the "voice of the nuclear industry".[18]

Along with companies and trade organizations like Foratom, General Electric, Hitachi, and Toshiba are all partners in the European Nuclear Industry. Other partners may include TEPCO from Japan and KEPCO from South Korea. The nuclear industry is regulated by governments and financing is often provided to private contractors who do the work.

Nuclear Safety is an ongoing discussion in the EU. The Western European Nuclear Regulators Association has members from 17 states or European countries. Nuclear safety faces many challenges.[19] WENR addresses these challenges and commits itself to objective reporting. An example of a report is the publication, "Stress Test" specifications, Proposal by the WENRA Task Force, 21 April 2011.[20]

Germany, Italy, and Switzerland have decided to phase out nuclear power plants.[21] According to FutureChallenges.org, Chancellor of Austria Werner Feymann plans to eliminate the usage of nuclear power by 2015 (nuclear power is already banned in Austria) and launched a citizen' initiative for a pan-EU ban on nuclear power.[22]

Power companies are building nuclear reactors in Finland and France and the French state continues to fund nuclear power, with a €1 billion added to help research for fourth-generation technology and nuclear safety.[23] GE Hitachi Nuclear Energy won a bid to build the Visaginas Nuclear Power Plant in Lithuania.[24]