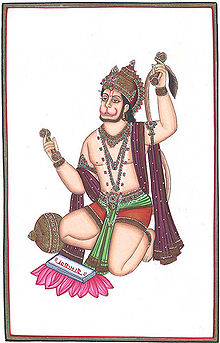 Hanuman, the perfect devotee of Rama visualised as a singer of bhajan

A Bhajan is any type of Indian devotional song. It has no fixed form: it may be as simple as a mantra or kirtan or as sophisticated as the dhrupad or kriti with music based on classical ragas and talas.[1] It is normally lyrical, expressing love for the Divine. The name, a cognate of bhakti, meaning religious devotion, suggests its importance to the bhakti movement that spread from the south of India throughout the entire subcontinent in the Moghul era.

Anecdotes and episodes from scriptures, the teachings of saints and descriptions of gods have all been the subject of bhajans. The Dhrupad style, Sufi qawwali[2] and the kirtan or song in the Haridasi tradition are related to bhajan. Nanak, Kabir, Meera, Narottama Dasa, Surdas and Tulsidas are notable composers. Traditions of bhajan such as Nirguni, Gorakhanathi, Vallabhapanthi, Ashtachhap, Madhura-bhakti and the traditional South Indian form Sampradya Bhajan each have their own repertoire and methods of singing.

Bhajans by Kabir, Mirabai, Surdas, Tulsidas and a few others are considered to be classic. The language of their works is influenced by several of the dialects of Hindi. They are widely enjoyed even among those who do not speak Hindi. Here is a representative selection of the best known bhajans by these poets.

This bhajan has been recorded by several well known singers. Kabir refers to his body as a chadar, a sheet of cloth. Kabir is the best-known exponent of Nirguni bhajan, which celebrate a formless (nirguna) divinity, encouraging listeners to shed dogma and look at reality. Baba Bulleh Shah is another and the Bauls of Bengal have developed from these roots. The Sikh guru Nanak gathered many such bhajans into the Guru Granth Sahib.

This is fine, this is fine cloth.
Dyed in the Ram Nam, the name of the lord,
A spinning wheel like an eight-petalled lotus spins it,
Five elements and three qualities are its pattern.
The Lord tailored it in ten moons,
Pressed the threads to get the weft tight.
It has been worn by gods, men and sages:
They soiled it with use.
Says Kabir; I have covered myself with this cloth most carefully,
And eventually will leave it as it was before.

A version of this famous hymn was used in the 1947 Hindi film Meerabai. Mirabai lived in Rajasthan and her dialect of Hindi is more properly called a variety of Rajasthani. Because of Rajasthan's proximity to Gujarat, Rajasthani and Gujarati share many similar linguistic features, and Mirabai seemed equally at home in either language.

Lord Girdhari (Krishna), make me your servant.
As your servant, I will plant a garden, and see you every day.
In the groves and lanes of Vrindavan, I will sing about you.

O my mind! Revere the kind Sri Rama, who can remove the fear of rebirths,
Who has lotus eyes, lotus face and lotus hands, lotus feet, red like the rising sun.

A very popular pad in Raga Ramkali. The naughty child Krishna was caught with freshly churned butter by his mother Yashoda, with some still on his face. He claims:

I did not eat the butter, mother.
I think my friends have smeared some on my face!

Sampradaya Bhajan or Dakhshina Bharatha Sampradaya Bhajan is the tradition of Bhajans (singing songs in praise of God and his divine love and simplicity) in India, particularly in South India. Dakshina" means "south" in Sanskrit and "Bharat" means "India". "Sampradaya" means a tradition which is handed down by one's ancestors.

It is the collection of Kirtanas (songs) and Namavalis (songs composed of names of Hindu gods like Lord Rama, Lord Krishna etc.) in a specific order. # Jagadguru Bodhendra Swamigal of Kanchi Kamakoti petam, Sri Marudhanallur Sadguru Swamigal, Sri Pudukottai Gopala Krishna Bhagavathar were instrumental in identifying the Kirtanas and Namavalis that are to be sung in any Bhajan and their evolution.

The bhajans are typically rendered in the following order:

And if time permits, one can sing the North Indian Bhajan Compositions of

Pooja ends here and Divya namam starts. (deepa pradakshinam - With lighted lamp in the middle considering the lamp as God, bhagavatas will do sankeertan by doing pradakshinas). This equals going around the earth.

V. D. Paluskar and V. N. Bhatkhande have combined Indian classical music with bhajan. The dancer Mallika Sarabhai has produced performances based on bhajans. Mallika Sarabhai, one of the nation’s most intelligent dance professionals, was successful in producing this piece that is innovative, yet flows into the inherent poetic structures of Bhajan with ease. Abhinaya Chakravathi Sri JS Eswara Prasad Rao of Hyderabad who is the disciple of AL Krishnamurthy Bhagavathar, Pudukkottai system, has produced performances based on Sampradaya bhajans under the title "Nitrya sankeerthnam", he has performed abhinaya for all the bhajans irrespective of the languages.

In Surat Shabd Yoga, the spiritual exercises (sadhanas) include repetition, particularly silent repetition, of a mantra given at initiation and bhajan ( here meaning listening to inner sounds).

Also bhajan singing is common in some Surat Shabd Yoga groups. In this case the bhajan are written by the living Master or his predecessors[3].