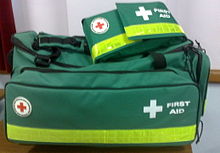 Large and small first aid kits used by the British Red Cross for event first aid, in the internationally recognised ISO green with a white cross. These kits also feature the red cross which is a protected symbol under the Geneva Conventions and may only be used by the Red Cross or military 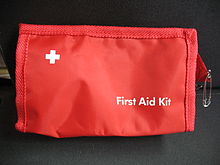 A small first aid kit, but in a non-recognised colour and bearing an equal white cross on a red background, illegal under the Geneva conventions

A first aid kit is a collection of supplies and equipment for use in giving first aid,[1] and can put together for the purpose (by an individual or organization, for instance), or purchased complete. There is a wide variation in the contents of first aid kits based on the knowledge and experience of those putting it together, the differing first aid requirements of the area where it may be used, and variations in legislation or regulation in a given area.

The international standard for first aid kits is that they should be identified with the ISO graphical symbol for first aid (from ISO 7010) which is an equal white cross on a green background, although many kits do not comply with this standard, either because they are put together by an individual or they predate the standards.

First aid kits can be assembled in almost any type of container, and this will depend on whether they are commercially produced or assembled by an individual. Standard kits often come in durable plastic boxes, fabric pouches or in wall mounted cabinets. The type of container will vary depending on purpose, and they range in size from wallet sized through to large rucksacks.

It is recommended that all kits are in a clean, waterproof container to keep the contents safe and aseptic.[2] Kits should also be checked regularly and restocked if any items are damaged or expired out of date.

The International Organization for Standardization (ISO) sets a standard for first aid kits of being green, with a white cross, in order to make them easily recognisable to anyone requiring first aid.

Whilst the ISO recommend the use of the green background and white cross, some individuals or organisations use a red cross on white background, but use of this symbol by anyone but the International Committee of the Red Cross (ICRC) or associated agency may be illegal under the terms of the First Geneva Convention, which designates the red cross as a protected symbol in all countries signatory to it. One of the few exceptions is in North America, where despite the passing of the First Geneva convention is 1864, and its ratification in the United States in 1881, Johnson & Johnson has used the red cross as a mark on its products since 1887 and registered the symbol as a U.S. trademark for medicinal and surgical plasters in 1905.[3]

Some first aid kits may also feature the Star of Life, normally associated with emergency medical services, but which are also used to indicate that the service using it can offer an appropriate point of care. However, for very small medical institutions and domestic purposes, the Red Cross on a plain, white background is preffered. 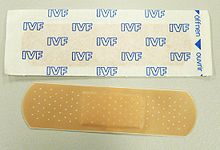 Adhesive bandages are one of the most commonly used items in a first aid kit. 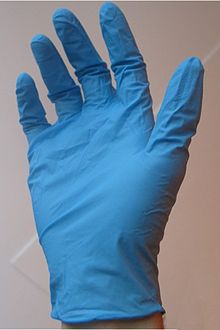 Specialized first aid kits are available for various regions, vehicles or activities, which may focus on specific risks or concerns related to the activity. For example, first aid kits sold through marine supply stores for use in watercraft may contain seasickness remedies.

First aid treats the ABCs as the foundation of good treatment. For this reason, most modern commercial first aid kits (although not necessarily those assembled at home) will contain a suitable infection barrier for performing artificial respiration as part of cardiopulmonary resuscitation, examples include:

Advanced first aid kits may also contain items such as:

Trauma injuries, such as bleeding, bone fractures or burns, are usually the main focus of most first aid kits, with items such as bandages and dressings being found in the vast majority of all kits.

The use of personal protective equipment or PPE will vary by kit, depending on its use and anticipated risk of infection. The adjuncts to artificial respiration are covered above, but other common infection control PPE includes:

Medication can be a controversial addition to a first aid kit, especially if it is for use on members of the public. It is, however, common for personal or family first aid kits to contain certain medications. Dependent on scope of practice, the main types of medicine are life saving medications, which may be commonly found in first aid kits used by paid or assigned first aiders for members of the public or employees, painkillers, which are often found in personal kits, but may also be found in public provision and lastly symptomatic relief medicines, which are generally only found in personal kits.

Besides its regular use in first aid, many first-aid items can also have improvised uses in a survival situation. For example, alcohol pads and petroleum jelly-based ointments can be used as a fire-starting aid in an emergency, and the latter can even be used as an improvised lubricant for certain mechanical devices, and adhesive tapes and bandages can be used for repairs. These alternate uses can be an important consideration when picking items for a kit that may be used in wilderness or survival situations. An alternative could however also be the use of additional kits with tools such as Survival kits and Mini survival kits.

In the United States, the Occupational Safety and Health Administration (OSHA) requires all job sites and workplaces to make available first aid equipment for use by injured employees .[4] While providing regulations for some industries such as logging [5] in general the regulation lack specifics on the contents of the first aid kit. This is understandable, as the regulation covers every means of employment, and different jobs have different types of injuries and different first-aid requirements. However, in a non-mandatory section, [6] the OSHA regulations do refer to ANSI/ISEA Specification Z308.1 [7] as the basis for the suggested minimum contents of a first aid kit. Another source for modern first aid kit information is United States Forest Service Specification 6170-6 ,[8] which specifies the contents of several different-sized kits, intended to serve groups of differing size.

In general, the type of first aid facilities required in a workplace are determined by many factors, such as: 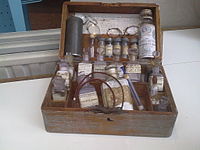 As the understanding of first aid and lifesaving measures has advanced, and the nature of public health risks has changed, the contents of first aid kits have changed to reflect prevailing understandings and conditions. For example, earlier US Federal specifications [9] [10] for first aid kits included incision/suction-type snakebite kits and mercurochrome antiseptic. As explained in the article on snakebite, this type of snakebite kit is no longer recommended. Mercurochrome is not approved by the US FDA due to concerns over mercury poisoning. Other examples include the CPR face shields and specific body-fluid barriers included in modern kits, to assist in CPR and to help prevent the spread of bloodborne pathogens such as HIV. Modern CPR not having been popularized until after 1960, and HIV not being recognized until 1983.