Bandage
This article is about the medical device. For the Lands song, see Bandage (song).
"Bandages" redirects here. For other uses, see Bandages (disambiguation). 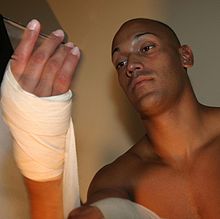 A bandage is a piece of material used either to support a medical device such as a dressing or splint, or on its own to provide support to the body; they can also be used to restrict a part of the body. During heavy bleeding or following a poisonous bite it is important to slow the flow of blood, tight bandages accomplish this task very well. Bandages are available in a wide range of types, from generic cloth strips, to specialized shaped bandages designed for a specific limb or part of the body, although bandages can often be improvised as the situation demands, using clothing, blankets or other material.

The term 'compression bandage' describes a wide variety of bandages with many different applications. 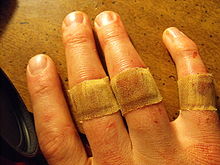 Short stretch compression bandages are applied to a limb (usually for treatment of lymphedema or venous ulcers). This type of bandage that is capable of shortening around the limb after application and is therefore not exerting ever-increasing pressure during inactivity. This dynamic is called resting pressure and is considered safe and comfortable for long-term treatment. Conversely, the stability of the bandage creates a very high resistance to stretch when pressure is applied through internal muscle contraction and joint movement. This force is called working pressure.A lot of elastic is contra-indicated because not only does it not help anything improve but it can cause an aching leg. And if you have PAD (peripheral arterial disease) it can aggravate an already poor arterial supply. So, it is best to avoid elastic if you want a good therapeutic effect. Short Stretch Compression Application

Long stretch compression bandages have long stretch properties, meaning their high compressive power can be easily adjusted. However, they also have a very high resting pressure and must be removed at night or if the patient is in a resting position.

Also known as a cravat bandage, a triangular bandage is a piece of cloth cut into a right-angled triangle, and often provided with safety pins to secure it in place. It can be used fully unrolled as a sling, folded as a normal bandage, or for specialized applications, as on the head. One advantage of this type of Bandage is that it can be makeshift and made from a fabric scrap or a piece of a t-shirt. The Boy Scouts popularized use of this bandage in many of their first aid lessons. They carry a cravat bandage with their uniform in the form of a neckerchief. When used to make a sling, for humerus or forearm fractures, it is best to tie the middle point. This goes under the elbow to help secure and restrict further movement of the arm. Next, take one of the long ends of the triangle bandage and tuck it under the arm. Then pull it over the injured shoulder and behind the neck. The other long end should be placed over the opposite should and tied with the other end on the side of the neck (not the back of the neck because of the pressure it places on it). Make sure the sling covers the arm from the elbow to or a little beyond the hand. To be nice you can also place something round in their hand to place the arm in a functioning position.

A tube bandage is applied using an applicator, and is woven in a continuous circle. It is used to hold dressings or splints on to limbs, or to provide support to sprains and strains, and it stops the bleeding.