Baldness treatment is a US $1 billion per year industry. In males past their early 20s, the incidence of balding is roughly equivalent to chronological age. Thus, by age 50, roughly half of men experience male pattern baldness (MPB).[1] Beginning in the 1980s, drug therapy has increasingly become a realistic management option for baldness in both men and women. For example, increased understanding of the role of dihydrotestosterone (DHT) in male and female pattern baldness has led to targeted intervention to prevent this hormone from acting on scalp androgen receptors.

Like many other medical conditions, baldness can be treated, but not cured. Moreover, experts warn that many treatments marketed as hair loss cures are ineffective aside from the placebo effect.[2]

Several genetic factors determine susceptibility to male pattern baldness (MPB). These factors include androgen receptor polymorphisms and scalp 5-alpha-reductase levels. Other variables include androgen receptor density and distribution in the scalp. Vigorous aerobic exercise daily, as opposed to short workout periods designed to raise androgen levels and build muscle or more sporadic exercise, and a diet which is adequate, yet more moderate in fat and total calorie intake, have been shown to reduce baseline insulin levels as well as baseline total and free testosterone.[3]

Androgenic alopecia occasionally correlates with metabolic syndrome. This may be because typically bald men have low testosterone levels (hypogonadism) which can easily trigger also diabetes mellitus and erectile dysfunction.[6] Medically increasing androgen levels improves this condition, demonstrating that androgens do not cause metabolic syndrome. Instead, high insulin levels (and possibly chronic inflammation)[7] seem the likely link in the demonstrated correlation between baldness and metabolic syndrome. This reinforces the notion that behaviors which help to keep insulin levels low and reduce chronic inflammation might also help to preserve hair.[8][9]

The U.S. Food and Drug Administration (FDA) has approved only two medications for the treatment of male pattern baldness; these are minoxidil (Rogaine)[2] and finasteride (Propecia).[10]

Finasteride is recommended as first-line treatment for male pattern baldness. They may also be used simultaneously when hair loss is progressive or further regrowth is desired after 12 months.[2]

Minoxidil (Rogaine) is a vasodilator originally used as an oral drug (Loniten) to treat high blood pressure. However, minoxidil was discovered to have the side effect of hair growth and reversing baldness. Consequently, in the 1980s, Upjohn Corporation received FDA approval to market a topical solution that contained 2% minoxidil to be used to treat baldness and hair loss as Rogaine, marketed as Regaine outside the USA.

The mechanism of action for minoxidil is not known. Its action as a vasodialator may involve opening vascular smooth muscle potassium channels or "K-channels", perhaps through mimicking the most important natural vasodialator, nitric oxide, whose structure minoxidil incorporates [12] . This agent can also cause follicles in the telogen phase to shed, usually soon to be replaced by new, thicker hairs. As the hair-growth-stimulating effect is temporary and does not seem to change the follicle in any other way, minoxidil needs to be applied regularly (once or twice daily) for hair gained to be maintained.[13] 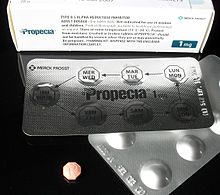 Finasteride (marketed by Merck under the trade names Propecia and Proscar) is a 5 alpha-reductase inhibitor of the type II isoenzyme.

It was originally FDA approved for treatment of benign prostatic hyperplasia (BPH) and works by binding to 5-alpha-reductase, the enzyme responsible for the conversion of free testosterone to DHT.

Merck sought to find the smallest effective quantity of finasteride and test its long-term effects on 1,553 men between ages 18 and 41 with mildly to moderately thinning hair. Based on their research, 1 mg/day was selected, and after two years of daily treatment, over 83% of the 1,553 men experiencing male hair loss had actually maintained or increased their hair count from baseline. Visual assessments concluded that over 80% had improved appearances.[14] 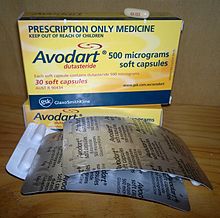 Dutasteride is a dual 5-a reductase inhibitor that inhibits conversion of testosterone to dihydrotestosterone (DHT).

Dutasteride inhibits both isoforms of 5-alpha reductase, type I and type II, whereas finasteride only inhibits type II.

Phase I and II clinical trials for dutasteride as a hair loss drug were undertaken, but called off in late 2002, with reasons for terminatation unknown.

The phase II results indicated that dutasteride at both 0.5 mg and 2.5 mg/day generated a superior hair count to finasteride 5 mg at 12 and 24 weeks.[18]

In December 2006, GlaxoSmithKline launched a new phase III, six month study in Korea to test the safety, tolerability and effectiveness of a once-daily dose of dutasteride (0.5 mg) for the treatment of MPB in the vertex region of the scalp (types IIIV, IV and V on the Hamilton-Norwood scale). The study was completed in January 2009.[19][20] Future intentions by GlaxoSmithKline to continue or abandon plans for FDA approval of dutasteride in treatment of male pattern baldness (MPB) remain unknown.

A medical hair transplant involves using small grafts of naturally-occurring units of one to four hairs, called follicular units, to move hair-producing follicles to balding areas of the hair restoration patient's scalp. These follicular units are surgically implanted in the scalp in very close proximity to one another and in large numbers. The grafts are obtained in one or both of the two primary methods of surgical extraction, Follicular Unit Transplantation (FUT) or Follicular Unit Extraction (FUE). In FUT, a strip of skin containing many follicular units is extracted from the patient and then dissected under a stereoscopic dissecting microscope. Once dissected into individual follicular unit grafts, the surgeon implants the grafts into small incisions, called recipient sites, in the recipient area of the patient's scalp.[21] According to the new approach the roots of the hair are extracted from the "donor", and then literally cut into tiny strips, for transplantation. Bald patches on the scalp are isolated and given the donor strip, which is two to three millimeters thick only. When the transaction is completed, the patient should wear a head bandage for the next two days. This will allow the scalp to treat not weakened, and increase the chances of success.[22]

Some devices claim to use low-level laser therapy (LLLT) to stimulate hair growth through "photo-biostimulation" of the hair follicles.[23]

Caffeine has been identified as a stimulator of human hair growth in vitro, and reduced testosterone-induced follicle growth suppression.[24] It has been demonstrated that the addition of caffeine to a shampoo-formulation is effective in administering caffeine to the hair follicles in the scalp.[25] Further research must be done to evaluate the efficacy and adequate dosage of caffeine in the treatment of androgenetic alopecia.

A spray made with coffee beans is claimed by the UK pharmacy chain Boots to prevent age-related hair loss in women.[26]

In February 2008 researchers at the University of Bonn announced they have found the genetic basis of two distinct forms of inherited hair loss, opening a broad path to treatments for baldness. They found that a gene, P2RY5, causes a rare, inherited form of hair loss called hypotrichosis simplex. It is the first receptor in humans known to play a role in hair growth. The fact that any receptor plays a specific role in hair growth was previously unknown to scientists and with this new knowledge a focus on finding more of these.[citation needed]

In May 2009, researchers in Japan identified a gene, SOX21, that appears to determine cyclical hair loss in mice. The researchers also believe it may be responsible for hair loss, or alopecia, in people.[27]

Through 2006, a drug development company spent $1,000,000 on a hair growth program focused on the potential development of a topical hedgehog agonist for hair growth disorders such as male pattern baldness and female hair loss. The hair loss research program was shut down in May 2007 because the process did not meet the proper safety standards.[28]

Stem cells and dermal papilla cells have been discovered in hair follicles. Research on these follicular cells may lead to successes in treating baldness through hair multiplication (HM), also known as hair cloning. HM is being developed by ARI (Aderans Research Institute, a Japanese owned company in the USA).[31][32]

In 2008, Intercytex, a company in Manchester (UK), announced positive results of a Phase II trial for a form of cloning hair follicles from the back of the neck, multiplying them and then reimplanting the cells into the scalp. The initial testing resulted in at least two thirds of male patients regrowing hair. As of 2009, the company estimates this treatment will take "a number of years to complete" Phase III trials before it can go to market.[33] However, after failing to achieve subsequent success in their trials, the company announced discontinuation of its hair multiplication project in January 2010 with intention to sell off its assets and research.[34] On March 25, 2010 Aderans Research Institute Inc. (ARI) announced it acquired key technology assets from Regenerative Medicine Assets Limited (formerly Intercytex Group plc).[35] ARI is currently conducting Phase II clinical trials in cities throughout the U.S.[36]

In December 2010, scientists at the Berlin Technical University in Germany revealed they had grown the world's first artificial hair follicles from stem cells. Research leader Dr Roland Lauster said within five years millions of hair-loss sufferers could grow new hair from their own stem cells and have it implanted into their bald spots. He also announced that preparations for clinical trials were "already in motion".[37]

In May 2007, U.S. company Follica Inc, announced they had licensed technology from the University of Pennsylvania which can regenerate hair follicles by reawakening genes which were once active only in the embryo stage of human development. Skin apparently can be brought back to this embryonic state when a wound is healing. Hair growth was discovered in the skin wounds of mice when Wnt proteins were introduced to the site. Development of a human treatment is expected to take several years.[38][39][40][41][42][43][44][45]