AH2 is the southern route of the North–South Expressway, which is the longest expressway in Malaysia. It is connected by the

, and continues on down south. The expressway is roughly oriented in a north–south direction traversing four states in Peninsular Malaysia; namely Selangor, Negeri Sembilan, Malacca and Johor.

The NSE Southern Route begins in the southern part of Selangor, at Sungai Besi. Its southern terminus (Kilometre Zero) is at Johor Bahru, Johor. 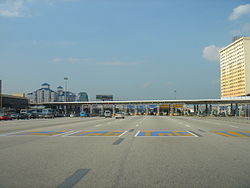 On July 2010, the operator PLUS Expressways Berhad announced that the government has awarded contracts to build a fourth lane on a stretch from Nilai (North) to Seremban. It is unknown when the construction is expected to begin.

Below is a list of interchanges (exits), laybys and rest and service areas along the NSE Southern route. Take note that the exits are arranged in ascending numerical order from North to South.