The North Western Expressway was a planned freeway route in Sydney, New South Wales, Australia, intended to link the Sydney CBD to its north-western suburbs, and ultimately the F3 Freeway to Newcastle.

The route was planned as early as 1962 (even providing a proposed freeway "dotted line" in the first UBD street directory of 1964), with the section from Fig Tree Bridge to Gladesville Bridge and the Western Distributor being the only completed sections. Work on stage one, from Ultimo to Pyrmont Bridge Road, began in 1974. 12 People were arrested during protests in Ultimo against the expressway, and the Whitlam government threatened to cut off $42 billion in road funding if the NSW government continued with construction.[1] As a result, construction was suspended.

The Wran Government cancelled the project in 1977, as a part of a change in government policy regarding freeways.[2] 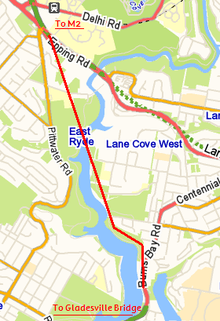 The now cancelled route that the expressway would have taken from Tarban Creek Bridge to Epping Road at East Ryde.

The original route was to start at the Western Distributor, connecting to Gladesville Bridge via a new elevated freeway.

The section of freeway from Gladesville Bridge to Fig Tree Bridge at Hunters Hill was completed in 1965 with the opening of Tarban Creek Bridge.

The route from there to approximately the intersection of Delhi Road and Epping Road was shown on a 1984 Department of Main Roads map, but was removed by 1988 when that map was reprinted.

The Westlink M7 continues along the original route from the M2 to Dean Park, where the M7 turns south while the North West Freeway corridor continues west.

The unused but still reserved corridor passes north of suburbs including Shalvey and Willmot, continuing west past Llandilo to stop abruptly near Londonderry at the foot of the Blue Mountains.