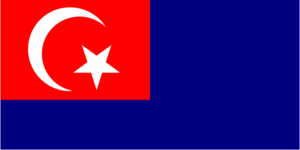 Segamat is a town and district located in the north of the state of in , bordering two other states of Malaysia ( on the west and on the north). It is located roughly 172 kilometres from , the capital city of State. It is 95 km travel distance via North-South Expressway from Johor Bahru to . It is another 77 km via Federal Route 1.

Strategically situated between , and , Segamat is a fast growing agricultural oil palm and rubber district, famous for its delicious s, and the recent slogan used to attract tourists to Segamat is "Selamat Datang ke Segamat - Tanah Raja Buah-buahan" (Welcome to Segamat - The Land of King of Fruits). Segamat town is a typical medium size town with a blend of old and new cultures. A mere 45 minute drive from town offers a variety of hiking and swimming sites namely the famous , Air Panas Waterfall and Waterfall which make an enjoyable weekend getaway.

According to a local historian, Hassan bin Muhammad, the area used to be known as Rantau Panjang. In around 1511, a (Prime Minister) of (Malacca), and his troops were retreating to after the fall of Melaka to the invading Portuguese forces led by . The and his troops stopped and rested by a river in the area and drank water from the river. After the drink, the Bendahara exclaimed, "Segar amat!", or "Very refreshing!" in Malay, and named the river "Segar Amat", which over time evolved into "Segamat". However, initially the name "Segamat" only applied to the river. The settlement which later became Segamat was originally called Rantau Panjang. The town assumed the river's name only at the turn of the 20th century.

In 1970s, was constructed to boost the economy of Segamat as an agricultural hub, to shorten the traveling time to and to speed up the development progress of the poorly-developed areas in southern .

The Johor branch campus of (UiTM) was constructed at in the end of 1980's and started its operation in 1991. The construction of UiTM campus in Segamat district turned Segamat into another important educational hub in Johor besides , which houses .

In 1999, the second bridge of Segamat,funded mainly by private developers was constructed to reduce congestion at the main bridge. The second bridge was included as a part of package consisting the road upgrade to 4-lane road at Jalan Pemuda, Jalan Hassan, Jalan Pee Kang Hai and Jalan Chia Chin Koon, which was completed in August 2005. The inner package is useful to divert the traffic flow when the main roads at the town center are closed for special occasions and events such as .

Segamat is divided into 11 residences, or "mukim" in Malay. Each "mukim" is administered by a headman or "penghulu".

Mukim Sungai Segamat is the most populous residence in Segamat District since it houses the majority of Segamat town. The highest population density is in Mukim Gemereh, followed by Mukim Sungai Segamat with over 200+ residents per square km. The lowest population density is in Mukim Bekok with about 50 residents per square km.

The town of Segamat is the fifth largest town in the state of with about 80,000 residents. According to local residents of Segamat, the town center of Segamat can be divided into two, where both neighborhoods are separated by :-
* "Bandar Atas" (Uptown) - The original town center of Segamat. The official site of Segamat town center today is "Dataran Segamat", or Segamat Square.
* "Bandar Seberang" (Crosstown) - Located at the other side across Segamat river. This neighborhood is known as "Bandar Seberang" because of its location across Segamat river. This area houses most of the supermarkets and shopping centers in Segamat.

In addition to the town center, the urban area of Segamat also covers some villages and towns namely Pekan Jabi, Bukit Siput, Segamat Baru and Bandar Putra Segamat, which makes up the overall population of Segamat urban area to 100,000 residents.

* - The original Segamat Murtabak, is an Indian Muslim (Mamak) dish commonly found in Malaysia, Indonesia, Singapore, Brunei and Yemen where it is called Motabbag (Arabic: المطبّق) which means "The Folded" so the name could be of Arabic origin. It is made from a thin dough filled with minced meat, usually mutton, and fried on a griddle until it turns golden brown. The fillings also include garlic, egg and onion. Martabak is served with slices of cucumber and onion, and a bowl of curry sauce. In Indonesia, Martabak also tends to be served with some kind of dark brown sauce made of vinegar and palm sugar. The famous Segamat murtabak is served by Ibrahim and Family Restaurants in Jalan Muar, opposite Klinik Kesihatan, near Arked Mara and Taman Yayasan.

* Universiti Teknologi Mara Kampus Johor - Located about 8 kilometres or 10 minutes drive from Bandar Segamat, [http://www.uitm.edu.my/uitm/index.php?option=com_content&task=view&id=22&Itemid=42 UiTM Kampus Johor] are major in Business and Accounting learning in Diploma and Degree level. Surrounded by a green landscape and rubber trees, this campus is a suitable place to study and enjoy a live in "kampung style".

* Kolej Tunku Abdul Rahman - The [http://www.tarc.edu.my/campus/johor/campus_jhr.htm Johor Branch Campus] in Segamat began operations on 18 May 1998. Located at the south of Segamat, the College is approximately 10 to 15 minutes drive from the town. Centred on an impressive 50-acre campus space, and surrounded by lush greenery and landscaped gardens, the College is equipped with every facility and recreational amenity for the most conducive study environment around.

Segamat Town has quite a number of schools, within its township. Below are the list of secondary schools in Segamat:

Below is a list of primary schools in Segamat (incomplete):

The cost of living in Segamat is relatively affordable. Accommodation is readily available at the housing areas in Segamat town. Shophouses, supermarkets, restaurants and hawker centres in the proximity offer various and inexpensive choices for shopping, chilling out and eating out.

Segamat has a collection of local legends and folk stories, where some of them describe the name origins of several places in Segamat. Sadly, most of the stories are at risk of extinction due to the influence of fantasy elements in many of the stories, creating doubts and confusion among the residents of Segamat. As a result, many of the residents of Segamat have forgotten most of them, even among older generations.

Malim Deman is a king in Segamat who was in love with Princess 'Santan Bertapis'. The princess was kidnapped by a spirit and Malim Deman swore that as long as the princess is not returned, the Segamat area shall experience floods for all eternity. However, with modern town planning and irrigation, flooding is now a rare occurrence in Segamat.

Segamat had experienced during the 1950s, 1984 and recently in 18 December 2006. The one in 2006, which was caused by in the , was generally considered the worst flood to have happenned in Segamat and , despite better town planning and irrigation by the authorities. There is a conspiracy theory abound that the 2006 flood was caused by improper release of water from the upstream Bekok Dam. The theory is based on the fact that the water level of Segamat river overflew at unimaginable speed, something impossible to be caused by the rain.

According to the elders in Segamat, a myth exists that tells of a , whose length spans the distance between Kampung Berata and Kampung Gemereh (~ 5km). The dragon sleeps underground, and Segamat may experience very bad floods when the dragon changes its sleeping position, said to be caused by gaps made when the dragon moves.

Other towns in Segamat District