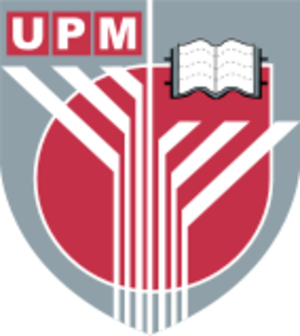 Universiti Putra Malaysia (English: Putra University, Malaysia [English translation of the name as per [http://www.acu.ac.uk/cgi-bin/membership.pl?cgiaction=display&jumpselect=607 Association of Commonwealth Universities] ] ), or , is a public university located in central , close to the capital city, Kuala Lumpur. It was formerly known as Universiti Pertanian Malaysia or Agricultural University of Malaysia (Malay: "universiti", university; "pertanian", agriculture; Malaysia). UPM is a research university offering undergraduate and postgraduate courses with a research focus on agricultural sciences and its related fields. Ranked joint 364th best university in the world in 2007 by [cite web|url=http://www.topuniversities.com/worlduniversityrankings/results/2007/overall_rankings/top_400_universities/|title=Times Higher Education - QS World University Rankings 2007 - Top 400 Universities|publisher=Quacquarelli Symonds|accessdate=2008-06-21] , UPM is taking steps to boost its research capabilities both in and beyond the scope of agriculture. [cite web|url=http://www.nst.com.my/Current_News/NST/Sunday/LearningCurve/2203075/Article|title=Research universities: Advancing agro-based research|last=Aswad|first=Mohd Noor|date=2008-04-05|publisher=The New Straits Times Online|accessdate=2008-06-21]

One can trace the origins of UPM to the School of Agriculture officially instituted on 21 May, 1931 by John Scott

In 1960 the Faculty of Agriculture at the was established. On 1 January, 1962 a statute was approved to make the Council of the College of Agriculture Malaya an authority of the University of Malaya.

The formation of an agricultural university providing programs of study at the degree level was suggested by the then Honorable Deputy Prime Minister, Tun Haji Hussein, on 31 March, 1969 at the opening ceremony of the additional wing to the College of Agriculture Malaya at Serdang, Selangor.

The establishment of Universiti Pertanian Malaysia finally culminated with the enacting of the Incorporation Order signed by His Majesty The as provided for under the Universities and University Colleges Act, 1971, and published in the Government Gazette as P.U.(A) 387 dated 29 October, 1971. The said Incorporation Order provides as follows :

"There shall be a higher educational institution having the status of University, which shall be a body corporate for the purpose of providing, promoting and developing higher education in the fields of Agriculture, Forestry, Veterinary Science, Natural Sciences, Engineering Sciences, Technology, Social Sciences, Humanities and Education as well as to provide for research and the accumulation and advancement of knowledge and the dissemination of such knowledge in the aforesaid fields of study."

The creation of this University was based on the merger of the College of Agriculture Malaya with the Faculty of Agriculture, University of Malaya. Dr. Mohd. Rashdan bin Haji Baba was appointed as the first by virtue of the provisions of section 18 of the Universities and University Colleges Act, 1971.

Universiti Pertanian Malaysia embarked on its first academic session in July 1973 with three foundation faculties: the Faculty of Agriculture, the Faculty of Forestry, and the Faculty of Veterinary Medicine and Animal Science. Beside the three faculties there was a Basic Sciences Division. The pioneer student enrolment was 1,559 for the Bachelor's degree in Agriculture, Diploma in Home Technology, Diploma in Animal Health and Production, Diploma in Science with Education, and Preliminary Programme.

In the early eighties, however, UPM expanded its areas of concentration by including Science and Technology subjects in its fields of study. In 1994 UPM embarked on its ambitious plan to develop into a futuristic university. It would provide better and up-to-date skills and systems for science and technology education. To do so, it would take full advantage of the rapid development in information technology. UPM thereafter transformed itself into a borderless campus, its name and reputation stretching far beyond Malaysian boundaries.

The climax of the transformation came with the changing of the name from Universiti Pertanian Malaysia to Universiti Putra Malaysia, in honour of . The change was officially announced on 3rd April 1997 by the then Prime Minister, Dato' Seri Dr. . This was a strategic way of portraying the status of UPM as a center of higher education capable of providing various fields of study deemed necessary to facilitate national development in the new millennium. This was especially true of UPM's provisions for studies in Information Technology (ITUPM was renamed in honour of , Malaysia's first Prime Minister. The renaming was looked upon as a strategic move in preparing UPM to become a versatile higher learning institution aligned with Malaysia’s strategic plans in dynamic high-technology. It lies near the heart of the , the first large-scale high-technology initiative of the Malaysian government, and near the new administrative capital, . The latter, too, was named after Tunku Abdul Rahman Putra Al-Haj.).

The university since its inception as Universiti Pertanian Malaysia, has had two branch campuses apart from the main campus at Serdang, Selangor. The UPM branch campuses were located in , and Mengabang Telipot, . The campus in Terengganu, however, has been upgraded to the University College of Science and Technology Malaysia (KUSTEM), with its own management and administration. KUSTEM officially broke away from UPM on 1st July, 2001. The Medicine and Health Sciences faculty maintains a campus complex adjacent to a local hospital in Serdang. [cite web|url=http://www.medic.upm.edu.my/FPSK/LAPORAN_PENERBITAN_BUKU_KATALOG_UPM_FPSK_BI.pdf|title=UPM/FMHS Catalog Report 2007/2008|publisher=Universiti Putra Malaysia|accessdate=2008-06-29 |format=PDF]

UPM began its academic life in 1973 with three founding Faculties and a Division of Basic Sciences. The first intake of 1,559 students were for the Bachelor's degree in Agriculture, Diploma in Home Technology, Diploma in Animal Health and Production, Diploma in Science with Education, and Preliminary Programme. Currently UPM offers 73 Bachelor's degree programmes, eight Diploma programmes, and 12 Masters and Doctoral programmes. There are 16 Faculties, eight Centres, six Institutes, two Schools, a University Park and a branch campus in Bintulu, Sarawak. The program provided by the Medical and Health Science division of the university was fully recognized by the Malaysia Medical Council on . [cite web |url=http://www.mma.org.my/Portals/0/List%20of%20Registrable%20Qualifications%20Per%20Second%20Schedule,%20Medical%20Act%201971.pdf |title=Second Schedule Medical Act 1971 |accessdate=2008-06-21 |author= |date=2007-08-02 |publisher=Malaysian Medical Council |pages=pp. 30 |format=PDF]

The Faculty of Engineering of Universiti Putra Malaysia was established on 1st January 1975 at the main Serdang Campus, some 22 kilometers to the south of Kuala Lumpur. It is one of the largest faculties at UPM with a student population of over 3000 owes as much to the excellence of its academic staff as to facilities and infrastructure that are being continuously made available. The campus’ location at the heart of the Multimedia Super Corridor (MSC) provides the faculty with the excellent access to the array of IT and multimedia facilities available in the Corridor. With the UPMNET providing sophisticated campus-wide broadband ATM network, coupled with the computing facilities at the faculty, students and staff have ready access to the latest in IT, Multimedia, CAD/CAM and internet facilities. Above all, they can enjoy the placid and conducive working environment in the famous ‘green campus’ which aesthetically encapsulates UPM’s history as the nation’s first agriculture college.

The eight academic departments housed within the faculty offer a similar number of Bachelor of Engineering degree programmers. The faculty is proud of the international character of its student population. Out of 800 postgraduate’s population, almost fifty percent are international student. In additional to provide excellent facilities and opportunities for teaching and research, the faculty has established Research Centre to R&D on selected priority areas of engineering and its related fields. [www.eng.upm.edu.my]

The university logo is depicted in the shape of a shield, with lines and an abstract water droplet within the shield. The main colours of the logo are red and grey. Each aspect of the logo carries with it a certain symbolism, from the commitment to environmental conservation in the water droplet to the importance of agriculture based on the lines. [cite web|url=http://www.upm.edu.my/?l=e&aktvt=content&kat=D&kod=20060401091123004192168147|title=UPM LOGO|date=2007-10-01|publisher=Universiti Putra Malaysia|accessdate=2008-06-21]

The (Malay: "Majlis Perwakilan Pelajar UPM" or "MPPUPM") is the student council of UPM. Council members are elected every year from all the faculties in the university by a campus election process. The main duties of the student council is to organize activities to enhance students' life and represent students on issues pertaining to students welfare and development.