An employment contract in English law is a specific kind of contract whereby one person performs work under the direction of another. The two main features of a contract is that work is exchanged for a wage, and that one party stands in a relationship of relative dependence, or inequality of bargaining power. On this basis, statute, and to some extent the common law, requires that compulsory rights are enforceable against the employer.

There are diverging views about the scope by which English law covers employees, as different tests are used for different kinds of employment rights, legislation draws an apparent distinction between a "worker" and an "employee", and the use of these terms are also different to their use in the European Court of Justice and European Union Directives. Under the Employment Rights Act 1996 section 230, an "employee" is anyone with a contract of service, which takes its meaning from a series of court cases that are also applicable for tax and tort law, where different judges have given different views about the meaning of the word. An "employee" is entitled to all types of rights that a worker has, but in addition the rights to reasonable notice before a fair dismissal and redundancy, protection in the event of an employer's insolvency or sale of the business, a statement of the employment contract, rights to take maternity leave or time off for child care, and an occupational pension.

A "worker" is a broader concept in its statutory formulation, and catches more people, but does not carry as many rights. A worker means any person who personally performs work, and is not a client or a customer. A worker is entitled to a minimum wage, holidays, to join a trade union, all anti-discrimination laws, and health and safety protection.

As yet, the UK has not consolidated a comprehensive definition of the people to whom employment rights and duties apply. Statute and case law, both domestic and European, use 2 main definitions, with approximately six others. The EU does have one consolidated definition of a ‘worker’, which is someone who has a contract for work in return for a wage, and also stands as the more vulnerable party to the contract.[1] This reflects the kernel of classical labour law theory, that an employment contract is one infused with “inequality of bargaining power”, and stands as a justification for mandating additional terms to what might otherwise be agreed under a system of total freedom of contract. 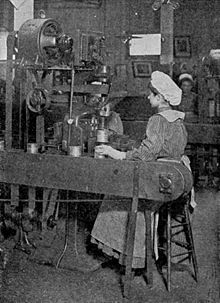 UK courts have agreed that an employment contract is one of a specific type, and that it cannot be equated with a commercial agreement.[2] However, UK statutes deploy two main definitions, of an ‘employee’ and a ‘worker’, with a different number of rights. The government may also pass secondary legislation to include specific groups of people into the ‘employee’ category.[3] An ‘employee’ has all available rights (all the rights of a ‘worker’ but also child care, retirement and job security rights). The meaning is explicitly left to the common law under the main statute, the Employment Rights Act 1996 section 230, and has developed according to the classical 19th century contrast between a contract ‘of service’ and one ‘for services’. While the classical test was that an employee was subject to a sufficient degree of ‘control’,[4] new forms of work where people were had greater autonomy outside the factory to choose how to do their jobs, meant that, particularly from the mid-20th century,[5] additional tests of employment were developed. Multiple factors, including how much one could said to be ‘integrated’ into the business,[6] or whether one metaphorically wore the ‘badge’ of the organisation, were looked at, with a focus, it was said on ‘economic reality’ and form over substance. Multiple relevant factors would include how much the employee was ‘controlled’, if they owned their tools, if they had the chance of profit and bore the risk of loss.[7] But in the late 1970s and 1980s, some courts began to speak of a new test of ‘mutuality of obligation’. One view of this was merely that workers exchanged work for a wage.[8] Another view stated that the employment relationship had to be one where there was an ongoing obligation to offer and accept work.[9] This led to cases where employers, typically of people on low wages and little legal understanding, pleaded that they had only hired a person on a casual basis and thus should not be entitled to the major job security rights.

In addition, a ‘worker’ is defined in ERA 1996 section 230 as someone with a contract of employment or who personally performs work and is not a client or a customer. So this concept has greater scope, and protects more people, than does the term ‘employee’. This class of person is entitled to a safe system of work, a minimum wage and limits on working time, as well as discrimination and trade union rights, but not job security, child care and retirement rights. This concept thus reaches up to protect people who are quasi-self employed professionals, albeit not so vulnerable, such as a home cleaner, or music teacher who visits student homes, or a taxi cab driver wearing a firm’s logo.

Once a person's work contract is categorised, the courts have specific rules for determining, beyond the statutory minimum charter of rights, what are its terms and conditions. Analogous rules for incorporation of terms, and implication terms exist as in the ordinary law of contract, however in ‘’Gisda Cyf v Barratt’’, Lord Kerr emphasised that this process of construction is one that must be “intellectually segregated” from the general law of contract, because of the relation of dependency an employee has.[10] In this case, Ms Barratt was told her employment was terminated in a letter that she opened 3 days after its arrival. When, 3 months and 2 days after arrival, she lodged an unfair dismissal claim, the employer argued it was time barred on the ground that in ordinary contract law one is bound by a notice when a reasonable person would have read a message. The Supreme Court held that Ms Barratt was in time for a claim because she was only bound by the notice when she actually read it. The applicable in employment was different, given the purpose of employment law to protect the employee. From formation to termination, employment contracts are to be construed in the context of statutory protection of dependent workers.

The terms of employment are all those things promised to an employee when work begins, so long as they do not contravene statutory minimum rights. In addition, terms can be incorporated by reasonable notice, for instance by referring to a staff handbook in a written employment agreement,[11] or even in a document in a filing cabinet next to the staff handbook.[12] While without express wording they are presumed not binding between the union and employer,[13] a collective agreement may give rise to individual rights. The test applied by the courts is to ask loosely whether its terms are ‘apt’ for incorporation, and not statements of ‘policy’ or ‘aspiration’. Where the collective agreement’s words are clear, a "last in, first out" rule was held to potentially qualify, but another clause purporting to censure compulsory redundancies was held to sound like it was binding ‘in honour’ only.[14]

In addition to statutory rights, expressly agreed terms and incorporated terms, the contractual hallmark of the employment relation is the series of standardised implied terms (or terms implied in law) that accompany it. In addition to individualised implied terms that the courts construe to reflect the reasonable expectations of the parties,[15] the courts have long held that employees are owed additional obligations, such as a safe system of work[16] and payment of wages even when the employer has no work to offer.[17] Reflecting more recent priorities, employers have also been recognised to have a duty to inform their employees of their workplace pension rights,[18] although they have stopped short of requiring employers to give advice on qualifying for workplace disability benefits.[19] The key implied term, however, is the duty of good faith, or “mutual trust and confidence”. This is a flexible concept that is applied in a broad variety of circumstances leading to remedies in damages or an injunction, such as to require employers do not act in an authoritarian manner, [20] call employees names behind their back, [21] treat workers unequally when upgrading pay, [22] run the company as a front for international crime,[23] or exercise discretion to award a bonus capriciously.[24] There is tension among judges about the extent to which the core implied term of mutual trust and confidence can be 'contracted out of', with the House of Lords having held that the parties are "free" to do so, while others approach the question as a matter of construction of the agreement which is within exclusive judicial competence to define.[25]

The second, and older hallmark of the employment contract is that employees are bound to follow their employers’ instructions while at work, so long as that does not contravene statute or their agreed terms. Every employment relation leaves the employer with a residue of discretion, historically expressed as the ‘master-servant’ relationship. Today, in practice, this leaves the employer with the ability to vary the terms of work in accordance with business need.[26] The courts have allowed this to continue, so long as it does not contradict a contract’s express terms, which always require an employee’s consent,[27] or renegotiation of a collective agreement.[28] However, it has also been held that employers may insert ‘flexibility clauses’ allowing them to reserve the right to vary any contract term.[29] The limits of the courts’ tolerance of such practices are evident if they touch procedures for accessing justice,[30] or potentially if they would contravene the duty of mutual trust and confidence.