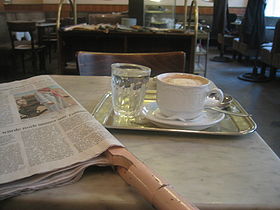 Since October 2011 the "Viennese Coffee House Culture" is listed as "Intangible Cultural Heritage" in the "Austrian Inventory" of the "National Agency for the Intangible Cultural Heritage", a part of UNESCO. The Viennese Coffee House is described in this inventory as a place “where time and space are consumed, but only the coffee is found on the bill.”[1] 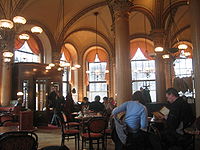 Unlike some other café traditions around the world, it is completely normal for a customer to linger alone for hours and study the omnipresent newspaper. Along with coffee, the waiter will serve an obligatory glass of cold tap water and during a long stay will often bring additional water unrequested, with the idea being that you are a guest who should feel welcomed and not pressured to leave for another patron.

In the late 19th and early 20th century, leading writers of the time became attached to the atmosphere of Viennese cafés and were frequently seen to meet, exchange and to even write there. Literature composed in cafés is commonly referred to as coffee house literature, the writers thereof as coffee house poets. The famous journal Die Fackel ("The Torch") by Karl Kraus is said to have been written in cafés to a large extent. Other coffee house poets include Arthur Schnitzler, Alfred Polgar, Friedrich Torberg, and Egon Erwin Kisch. Famous writer and poet Peter Altenberg even had his mail delivered to his favorite café, the Café Central.

The furnishings of a Viennese café can vary from plush and comfy to coldly modern and stylish. The classic look includes Michael Thonet chairs and marble tabletops.

Many cafés provide small food dishes like sausages as well as desserts, cakes and tarts, like Apfelstrudel, Millirahmstrudel (milk-cream strudel) and Linzer torte.

In many classic cafés (for example Café Diglas, Café Central, Café Prückel) piano music is played in the evening and social events like literary readings are held. In warmer months, customers can often sit outside in a Schanigarten. 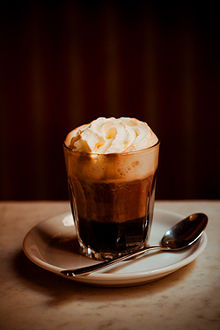 Einspänner, it is classically served in a glass 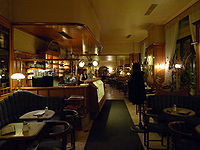 Legend has it that soldiers of the Polish-Habsburg army, while liberating Vienna from the second Turkish siege in 1683, found a number of sacks with strange beans that they initially thought were camel feed and wanted to burn. The Polish king Jan III Sobieski granted the sacks to one of his officers named Jerzy Franciszek Kulczycki, who started the first coffee house. After some experimentation, he added some sugar and milk, and the Viennese coffee tradition was born. This achievement has been recognized in many modern Viennese coffeehouses by hanging a picture of Kulczycki in the window.[2] Another account is that Kulczycki, having spent two years in Ottoman captivity, knew perfectly well what coffee really is and tricked his superiors into granting him the beans that were considered worthless.[3]

The new drink was well received, and coffee houses began to pop up rapidly. In the early period, the various drinks had no names, and customers would select the mixtures from a colour-shaded chart.

The heyday of the coffee house was the turn of the nineteenth century when writers like Peter Altenberg, Alfred Polgar, Karl Kraus, Hermann Broch and Friedrich Torberg made them their preferred place of work and pleasure. Many famous artists, scientists, and politicians of the period such as Arthur Schnitzler, Stefan Zweig, Egon Schiele, Gustav Klimt, Adolf Loos, Theodor Herzl, Alfred Adler,[5] and even Leon Trotsky were constant coffee house patrons. In Prague, Budapest, Cracow, and Lviv (Lemberg) and other cities of the Austro-Hungarian empire there were also many coffee houses according to the Viennese model.

From 1950, the period of "coffee house death" or Kaffeehaussterben began, as many famous Viennese coffee houses had to close, in parts due to the popularity of television and the appearance of modern espresso bars, but mostly as a result of the Holocaust devastating a large part of what made the Vienese coffee house a cultural institution. Nevertheless, many of these classic Viennese spots still exist, and tourism and a renewed interest in their history have prompted a comeback. 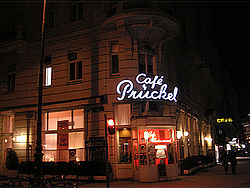 The Café Prückel at night 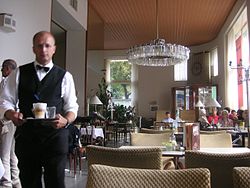 The original 1950s interior of the Café Prückel 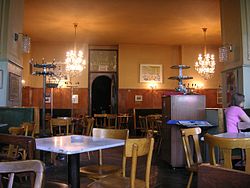 The Café Westend in Neubau