An Internet café or cybercafé is a place which provides internet access to the public, usually for a fee. These businesses usually provide snacks and drinks, hence the café in the name. The fee for using a computer is usually charged as a time-based rate.

Cyberia: one of the world's first Internet cafés, London, 1994

The online café phenomenon was started in July 1991 by Wayne Gregori in San Francisco when he began SFnet Coffeehouse Network. Gregori designed, built and installed 25 coin operated computer terminals in coffeehouses throughout the San Francisco Bay Area. The café terminals dialed into a 32 line Bulletin Board System that offered an array of electronic services including FIDOnet mail and, in 1992, Internet mail.[1] The concept of a café with full Internet access (and the name Cybercafé) was invented in early 1994 by Ivan Pope. Commissioned to develop an Internet event for an arts weekend at the Institute of Contemporary Arts (ICA) in London, and inspired by the SFnet terminal based cafes, Pope wrote a proposal outlining the concept of a café with Internet access from the tables. The event was run over the weekend of 12–13 March 1994 during the 'Towards the Aesthetics of the Future' event.

After an initial appearance at the conference site of the 5th International Symposium on Electronic Art, ISEA, in August 1994, an establishment called CompuCafe was established in Helsinki, Finland, featuring both Internet access and a robotic beer seller.

Inspired partly by the ICA event, a commercial establishment of this type, called Cyberia, opened on September 1, 1994 in London, England. In January 1995, CB1 Café in Cambridge, installed internet and is the longest running Internet Café in the UK, still operating today. [2]

The first public, commercial American Internet café was conceived and opened by Jeff Anderson in August 1994, at Infomart in Dallas, Texas and was called The High Tech Cafe.[3]

Next, in the USA, three Internet cafés opened in the East Village neighborhood of New York City: Internet Cafetm, opened by Arthur Perley, the @ Cafe, and the Heroic Sandwich.[4] In 1996, the Internet café Surf City opened in downtown Anchorage, Alaska. 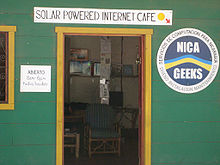 Internet cafés are located worldwide, and many people use them when traveling to access webmail and instant messaging services to keep in touch with family and friends. Apart from travelers, in many developing countries Internet cafés are the primary form of Internet access for citizens as a shared-access model is more affordable than personal ownership of equipment and/or software. A variation on the Internet café business model is the LAN gaming center, used for multiplayer gaming. These cafés have several computer stations connected to a LAN. The connected computers are custom-assembled for gameplay, supporting popular multiplayer games. This is reducing the need for video arcades and arcade games, many of which are being closed down or merged into Internet cafés. The use of Internet cafés for multiplayer gaming is particularly popular in certain areas of Asia like China, Taiwan, Hong Kong, South Korea and the Philippines. In some countries, since practically all LAN gaming centers also offer Internet access, the terms net cafe and LAN gaming center have become interchangeable. Again, this shared-access model is more affordable than personal ownership of equipment and/or software, specially since games often require high end and expensive PCs.

There are also Internet kiosks, Internet access points in public places like public libraries, airport halls, sometimes just for brief use while standing. Many hotels, resorts, and cruise ships offer Internet access for the convenience of their guests; this can take various forms, such as in-room wireless access, or a web browser that uses the in-room television set for its display (usually in this case the hotel provides a wireless keyboard on the assumption that the guest will use it from the bed), or computer(s) that guests can use, either in the lobby or in a business center. As with telephone service, in the US most mid-price hotels offer Internet access from a computer in the lobby to registered guests without charging an additional fee, while fancier hotels are more likely to charge for the use of a computer in their "business center."

For those traveling by road in North America, many truck stops have Internet kiosks, for which a typical charge is around 20 cents per minute.[5]

Internet cafés come in a wide range of styles, reflecting their location, main clientele, and sometimes, the social agenda of the proprietors. In the early days they were important in projecting the image of the Internet as a 'cool' phenomena.

Internet cafés are a natural evolution of the traditional café[citation needed]. Cafés started as places for information exchange, and have always been used as places to read the paper, send postcards home, play traditional or electronic games, chat to friends, find out local information. Cafés have also been in the forefront of promoting new technologies, for example, the car in 1950s California.

As Internet access is in increasing demand, many pubs, bars and cafes have terminals, so the distinction between the Internet cafe and normal café is eroded. In some, particularly European countries, the number of pure Internet cafés is decreasing since more and more normal cafés offer the same services. However, there are European countries where the total number of publicly accessible terminals is also decreasing. An example of such a country is Germany. The cause of this development is a combination of complicated regulation, relatively high Internet penetration rates, the widespread use of notebooks and PDAs and the relatively high number of WLAN hotspots. Many pubs, bars and cafés in Germany offer WLAN, but no terminals since the Internet café regulations do not apply if no terminal is offered. Additionally, the use of Internet cafés for multiplayer gaming is very difficult in Germany since the Internet cafe regulations and a second type of regulations which was originally established for video arcade centers applies to this kind of Internet cafes. It is, for example, forbidden for people under the age of 18 to enter such an Internet café, although particularly people under 18 are an important group of customers for this type of Internet café.

While most Internet cafés are private businesses many have been set up to help bridge the 'digital divide', providing computer access and training to those without home access. For example, the UK government has supported the setting up of 6000 telecentres.

In Asia, gaming is very popular at the Internet Cafes. This popularity has helped create a strong demand and a sustainable revenue model for most Internet cafes. With growing popularity, there also comes with this a responsibility as well. In fighting for competitive market share, the Internet cafes have started charging less and hence are adopting alternate means to maximize revenue. This includes selling food, beverages, game and telephone cards to its patrons. 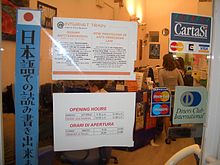 To combat terrorism, Italian government requires positive identification from all users of Internet cafes. (Florence, May 2006)

In places with censoring regimes such as Singapore, Internet cafés are closely controlled. In some places computers are in booths to allow private access to pornography. In some areas of Los Angeles they are controlled because they attract street gangs.[citation needed]

In Brazil, the initial concept brought by Monkey Paulista was based on the business model used by Internet cafes in South Korea, since this was the first house LAN to exist in Brazil, inaugurated in São Paulo, starting its activities in 1998. The company closed in 2010. [2] However, just a week later for reasons of bureaucracy, the company Lan Game @ The House was opened and today is the 1st lan house of Brazil in activity. Today it is seen as the country as a way to test new technologies and demonstration of games and products.

2009: Over 6,000 Internet cafes in countries like Thailand and Indonesia have voluntarily signed up to provide a safe software experience for its patrons. With over 100,000 computers involved in this program, it is the largest mass improvement of Internet cafes in the world.

First Internet Cafe in Greece was Museum internet cafe 1998-2008. Popularity of Internet games had as result the growth of internet cafe at all cities and islands with Salonika leading the progress. Most of them are Gaming stations and few are original Internet cafes mostly in Central Athens, Glyfada, Islands. Prices 1-3 euros per hour and offers are available. On 2010 and 2011 many of the internet cafes closed due to economical crisis.

According to APWKomitel (Association of Community Internet Center) there are 5,000 Internet Cafes in urban Indonesian cities in 2006 providing computer/printer/scanner rental, training, PC gaming and Internet Access/Rental to the people who do not have PC or Internet access at home. The website also contains a directory listing some of these warnet/telecenter/gamecenter in Indonesia. In urban areas, the generic name is Warnet (or Warung Internet) and in rural areas the generic name is Telecenter. Warnets/ Netcafes (i.e.: Java NetCafe established in 1998) are usually owned by private SME as bottom-up initiatives, while Telecenters in rural villages are usually initiated by Government and Donors as top-down financing. Information on Netcafe/Warnet in Indonesia can also be found in a book titled: Connected for Development:Indonesian Case study. Currently, no special license is required to operate an Internet Cafe or Warnet in Indonesia, except for the ordinary business license also applied to cafe or small shop. Because of hype and many Internet cafe starting their business without proper planning, some of them closed down for lack of a business plan. Although the number is still growing, associations such as APWKomitel urge new Internet cafe owners to do a feasibility study before planning to open an Internet cafe, and provide a business model called Multipurpose Community Internet Center or "MCI Center" to make the business more sustainable and competitive.

In South Korea, Internet cafes are called PC bangs.[7] They are ubiquitous in South Korean cities, numbering over 20,000.[8] PC bangs mostly cater to online game playing for the younger generation. On average and mode, use of a PC bang computer is priced at around 1,000 won per hour (about USD$0.88).

In Taiwan, many people go to Internet cafés. The Internet café in traditional Chinese is "網咖" (wangka). The first character means "net" and the second character is the first syllable of "café."

In the Philippines, internet cafés are found on every street in major cities and there is at least one in most municipalities or towns. There are also internet cafés in coffee shops and malls. High-end restaurants and fast food chains also provide free broadband to diners. Rates range from P10 ($0.20) on streets, up to P100 ($2) in malls.