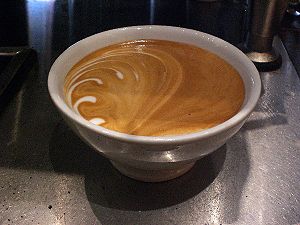 Café au lait as being served in Oslo, Norway; espresso + steamed milk, served in a bowl.

Café au lait (French pronunciation: [kafe o lɛ] "coffee with milk") is a French coffee drink. The meaning of the term differs between Europe and the United States; in both cases it means some kind of coffee with hot milk added, in contrast to white coffee, which is coffee with room temperature milk or other whitener added.

At home, café au lait can be prepared from dark coffee and heated milk; in cafés, it has been prepared on espresso machines from espresso and steamed milk ever since these machines became available in the 1940s – thus it refers to the usual "coffee + milk" combination, depending on the location, not to a specific drink.

"Café au lait" and "caffè latte" are used as contrasting terms, to indicate whether the beverage is served in the "French" or the "Italian" way – the former being in a white porcelain cup or bowl, the latter in a kitchen glass and always made from an espresso machine, whereas "Café au lait" might be espresso or dark coffee based. 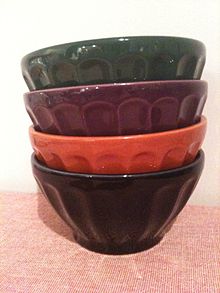 In many American coffeehouses, a "café au lait" is a drink of strong drip brewed or French pressed coffee, to which steamed milk is added; this contrasts with a "caffè latte", which uses espresso as a base. American café au lait is generally served in a cup, as with brewed coffee, being served in a bowl only at shops which wish to emphasize French tradition.

The term misto (literally, "mixed") is also used to refer to a café au lait, most notably by Starbucks.[1]

Café au lait in New Orleans has been popularized contemporarily in part by Café du Monde. There, it is made with milk and coffee mixed with chicory, giving it a strong, bitter taste. Unlike the European café style, a New Orleans café au lait is made with scalded milk -- milk warmed over heat to just below boiling -- rather than steamed milk.[2] Inclusion of roasted chicory root as an extender in coffee became common in colonial Louisiana, and eventually was incorporated as a regular coffee additive. The bitterness of the chicory offsets the sweetness of the powdered-sugar-covered beignets, a common accompaniment.

Other uses of term

In medicine, "café au lait spots" are the discolored birthmark-like spots on a patient's skin that may be indicative of neurofibromatosis or other conditions.[citation needed]