Maurice Polydore Marie Bernard Maeterlinck,[1] also called Comte (Count) Maeterlinck from 1932,[2] (French pronunciation: [mo.ʁis ma.tɛʁ.lɛ̃ːk] in Belgium, mɛ.teʁ.lɛ̃ːk in France;[3] 29 August 1862 – 6 May 1949) was a Belgian playwright, poet, and essayist who wrote in French. He was awarded the Nobel Prize in Literature in 1911. The main themes in his work are death and the meaning of life. His plays form an important part of the Symbolist movement.

Maeterlinck was born in Ghent, Belgium to a wealthy, French-speaking family. His father, Polydore, was a notary who enjoyed tending the greenhouses on their property. His mother, Mathilde, came from a wealthy family.[4]

In September 1874 he was sent to the Jesuit College of Sainte-Barbe, where works of the French Romantics were scorned and only plays on religious subjects were permitted. His experiences at this school influenced his distaste for the Catholic Church and organized religion.[5]

He had written poems and short novels during his studies, but his father wanted him to go into law. After finishing his law studies at the University of Ghent in 1885, he spent a few months in Paris, France. He met some members of the new Symbolism movement, Villiers de l'Isle Adam in particular, who would have a great influence on Maeterlinck's subsequent work. 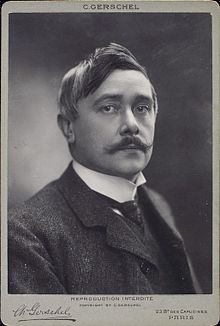 Maeterlinck early in his career.

Maeterlinck instantly became a public figure when his first play, Princess Maleine, received enthusiastic praise from Octave Mirbeau, the literary critic of Le Figaro in August 1890. In the following years, he wrote a series of symbolist plays characterized by fatalism and mysticism, most importantly Intruder (1890), The Blind (1890) and Pelléas and Mélisande (1892).

He had a relationship with the singer and actress Georgette Leblanc from 1895 till 1918. Leblanc influenced his work for the following two decades. With the play Aglavaine and Sélysette Maeterlinck began to create characters, especially female characters, more in control of their destinies. Leblanc performed these female characters on stage. Even though mysticism and metaphysics influenced his work throughout his career, he slowly replaced his Symbolism with a more existential style.[6]

In 1895, with his parents frowning upon his open relationship with an actress, Maeterlinck and Leblanc moved to the district of Passy in Paris. The Catholic Church was unwilling to grant her a divorce from her Spanish husband. They frequently entertained guests, including Mirbeau, Jean Lorrain, and Paul Fort. They spent their summers in Normandy. During this period, Maeterlinck published his Twelve Songs (1896), The Treasure of the Humble (1896), The Life of the Bee (1901), and Ariadne and Bluebeard (1902).[6]

In 1903, Maeterlinck received the Triennial Prize for Dramatic Literature from the Belgian government.[7]

In 1906, Maeterlinck and Leblanc moved to a villa in Grasse. He spent his hours meditating and walking. As he emotionally pulled away from Leblanc, he entered a state of depression. Diagnosed with neurasthenia, he rented the Benedictine Abbey of St. Wandrille in Normandy to help him relax. Leblanc would often walk around in the dress of an abbess; he would wear roller skates as he moved about the house.[8] During this time, he wrote his essay "The Intelligence of Flowers" (1906), in which he discussed politics and championed socialist ideas. He donated money to many workers' unions and socialist groups. At this time he conceived his greatest contemporary success: the fairy play The Blue Bird (1908). He also wrote Marie-Victoire (1907) and Mary Magdalene (1910) with lead roles for Leblanc.[9] With the exception of The Blue Bird, critics did not praise these plays and considered Leblanc no longer an inspiration to the playwright. Even though alfresco performances of some of his plays at St. Wandrille had been successful, Maeterlinck felt that he was losing his privacy. The death of his mother on 11 June 1910 added to his depression.[10]

In 1910 he met the 18-year-old actress Renée Dahon during a rehearsal of The Blue Bird. She became his lighthearted companion. Winning the Nobel Prize for Literature served to heighten his spirits, as well. By 1913, he was more openly socialist and sided with the Belgian trade unions against the Catholic party during a strike.[11] He began to study mysticism and lambasted the Catholic Church in his essays for misconstruing the history of the universe.[12] By a decree of 26 January 1914, his opera omnia were placed on the Index Librorum Prohibitorum by the Roman Catholic Church.

When Germany invaded Belgium in 1914, Maeterlink wished to join the French Foreign Legion, but his application was denied due to his age. He and Leblanc decided to leave Grasse for a villa near Nice, where he spent the next decade of his life. He gave speeches on the bravery of the Belgian people and placed guilt upon all Germans for the war. While in Nice he wrote The Mayor of Stilmonde, which was quickly labeled by the American press as a "Great War Play." He also wrote The Betrothal, a sequel to The Blue Bird, in which the heroine of the play is clearly not a Leblanc archetype.[13]

On 15 February 1919 Maeterlinck married Dahon. He accepted an invitation to the United States. Samuel Goldwyn asked him to produce a few scenarios for film. Only two of Maeterlinck's submissions still exist; Goldwyn didn't use any of them. Maeterlinck had prepared one based on his The Life of the Bee. After reading the first few pages Goldwyn burst out of his office, exclaiming: "My God! The hero is a bee!"

By the 1920s, Maeterlinck found himself no longer in tune with the times. His plays of this period (The Power of the Dead, The Great Secret, Berniquel) received little attention. Dahon gave birth to a stillborn child in 1925.

In 1926 Maeterlinck published La Vie des Termites (translated into English as The Life of the Termite or The Life of the White Ant), an entomological book that plagiarised the book The Soul of the (White) Ant, researched and written by the Afrikaner poet and scientist Eugene Marais,[14] in what has been called "a classic example of academic plagiarism" by University of London's professor of biology, David Bignell.[15]

Marais accused Maeterlinck of having used his concept of the "organic unity" of the termitary in his book.[16] Marais had published his ideas on the termitary in the South African Afrikaans-language press, both in Die Burger in January 1923 and in Huisgenoot, which featured a series of articles on termites under the title "Die Siel van die Mier" (The Soul of the (White) Ant) from 1925 to 1926. Maeterlinck's book, with almost identical content,[15] was published in 1926. Maeterlinck was able to commit the plagiarism because he was Belgian and, though his mother tongue was French, he was fluent in Dutch, from which Afrikaans was derived. It was common at the time for worthy articles published in Afrikaans to be reproduced in Flemish and Dutch magazines and journals.

Supported by a coterie of Afrikaner Nationalist friends, Marais sought justice through the South African press and attempted an international lawsuit. This was to prove financially impossible and the case was not pursued. However, Marais gained a measure of renown as the aggrieved party and as an Afrikaner researcher who had opened himself up to plagiarism because he published in Afrikaans out of nationalistic loyalty. Marais brooded at the time of the scandal: "I wonder whether Maeterlinck blushes when he reads such things [critical acclaim], and whether he gives a thought to the injustice he does to the unknown Boer worker?"[16]

Maeterlinck's own words in The Life of the Termite indicate that the possible discovery or accusation of plagiarism worried him:

It would have been easy, in regard to every statement, to allow the text to bristle with footnotes and references. In some chapters there is not a sentence but would have clamoured for these; and the letterpress would have been swallowed up by vast masses of comment, like one of those dreadful books we hated so much at school. There is a short bibliography at the end of the volume which will no doubt serve the same purpose.

Despite these misgivings, there is no reference to Eugene Marais in the bibliography. Maeterlinck's other works on entomology include The Glass Spider (1923) and The Life of the Ant (1930).

Robert Ardrey, an admirer of Eugene Marais's, attributed Marais's later suicide to this act of plagiarism and theft of intellectual property by Maeterlinck,[17] although Marais' biographer, Leon Rousseau, speculated that Marais enjoyed and thrived on the controversy and attention generated by the controversy.[18]

In 1930 he bought a château in Nice, France, and named it Orlamonde, a name occurring in his work Quinze Chansons.

According to an article published in the New York Times in 1940, he arrived in the United States from Lisbon on the Greek Liner Nea Hellas. He had fled to Lisbon in order to escape the Nazi invasion of both Belgium and France. The Times quoted him as saying, "I knew that if I was captured by the Germans I would be shot at once, since I have always been counted as an enemy of Germany because of my play, The Mayor of Stilmonde, which dealt with the conditions in Belgium during the German Occupation of 1918." As with his earlier visit to America, he still found Americans too casual, friendly and Francophilic for his taste.[19]

He returned to Nice after the war on 10 August 1947. In 1948, the French Academy awarded him the Medal for the French Language. He died in Nice on 6 May 1949 after suffering a heart attack. There was no priest at his funeral. 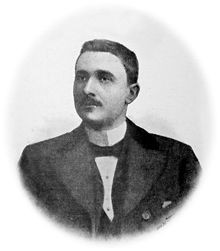 Maeterlinck, an avid reader of Arthur Schopenhauer, considered man powerless against the forces of fate. He believed that any actor, due to the hindrance of physical mannerisms and expressions, would inadequately portray the symbolic figures of his plays. He concluded that marionettes were an excellent alternative. Guided by strings operated by a puppeteer, Maeterlinck considered marionettes an excellent representation of fate's complete control over man. He wrote Interior, The Death of Tintagiles, and Alladine and Palomides for marionette theatre.[20]

From this, he gradually developed his notion of the "static drama." He felt that it was the artist's responsibility to create something that did not express human emotions but rather the external forces that compel people.[21] Materlinck once wrote that "the stage is a place where works of art are extinguished. [...] Poems die when living people get into them."[22]

He explained his ideas on the static drama in his essay "The Tragic in Daily Life" (1896), which appeared in The Treasure of the Humble. The actors were to speak and move as if pushed and pulled by an external force, fate as puppeteer. They were not to allow the stress of their inner emotions to compel their movements. Maeterlinck would often continue to refer to his cast of characters as "marionettes."[23]

Maeterlinck's conception of modern tragedy rejects the intrigue and vivid external action of traditional drama in favour of a dramatisation of different aspects of life:

He cites a number of classical Athenian tragedies—which, he argues, are almost motionless and which diminish psychological action to pursue an interest in "the individual, face to face with the universe"—as precedents for his conception of static drama; these include most of the works of Aeschylus and Sophocles' Ajax, Antigone, Oedipus at Colonus, and Philoctetes.[25] With these plays, he claims:

Pelléas and Mélisande inspired four major musical compositions at the turn of the 20th century:

Other musical works based on Maeterlinck's plays include: 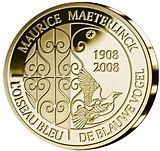