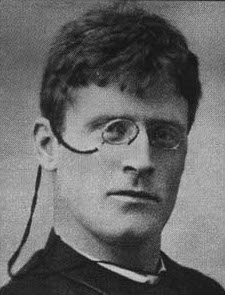 Knut Hamsun, born Knud Pedersen (, - , ) was a Norwegian author. He was considered by to be the "father of modern literature", and by King Haakon to be Norway's soul. In 1920, the awarded him the , "for his monumental work, "". He insisted that the intricacies of the human mind ought to be the main object of modern literature, to describe the "whisper of the blood, and the pleading of the bone marrow". Hamsun pursued his literary program, debuting in 1890 with the "Hunger".

Hamsun was a prominent advocate of and German culture, and an opponent of British as well as the . During , Hamsun supported and his party , and was later charged for treason. However, the charges were dropped, but a case was raised against him, and in 1948, he was fined 325.000 kroner for his alleged membership, a membership which is disputed.

In the years after the war, he was examined by the psychologist Gabriel Langfeldt, who concluded with the diagnosis "permanently impaired mental abilities", although the validity of this diagnosis has been debated. Hamsun’s last novel ""—which was part memoir, part self-defense—was published in 1949.

Knut Hamsun was born as Knud Pedersen in ,

In 1898, Hamsun married (née Bech), but the marriage ended in 1906. Hamsun then married Marie Andersen (b. 1881) in 1909 and she would be his companion until the end of his life. She wrote about their life together in her two s. Marie was a young and promising actress when she met Hamsun, but she ended her career and traveled with him to Hamarøy. They bought a farm, the idea being "to earn their living as farmers, with his writing providing some additional income".

However, after a few years, they decided to move south, to . In 1918, the couple bought Nørholm, an old and somewhat dilapidated manor house between and . The main residence was restored and redecorated. Here Hamsun could occupy himself writing undisturbed, although he often travelled to write in other cities and places (preferably in spartan housing).

Hamsun first received wide acclaim with his 1890 novel "Hunger" ("Sult"). The semi-autobiographical work described a young and egocentric writer's descent into near madness as a result of hunger and poverty in the Norwegian capital of . To many, the novel presaged the writings of and other twentieth-century novelists with its and bizarre logic.

A theme to which Hamsun often returned is that of the perpetual wanderer, an itinerant stranger (often the narrator) who shows up and insinuates himself into the life of small rural communities. This wanderer theme is central to the novels "Mysteries", "Pan", "Under the Autumn Star", "The Last Joy", "Vagabonds", and others.

Hamsun’s prose often contains rapturous depictions of the natural world, with intimate reflections on the Norwegian woodlands and coastline. For this reason, he has been linked with the spiritual movement known as . Hamsun saw mankind and nature united in a strong, sometimes mystical bond. This connection between the characters and their natural environment is exemplified in the novels "Pan", "A Wanderer Plays on Muted Strings", and the epic "", for which Hamsun received the in 1920.

A fifteen-volume edition of his complete works was published in 1954.

Hamsun was a prominent advocate of and German culture, as well as a rhetorical opponent of British and the , and he supported Germany during both the First and the . Despite his immense popularity in Norway and around the world, Hamsun's reputation for a time waned considerably because of his support of 's National Socialist government. Following a meeting with in 1943, he sent Goebbels his Nobel Prize medal as a gift.

While in his 80s, and largely deaf, Hamsun met with . His audience with him is recorded to have been mostly him complaining about the Nazi depredations against . Hamsun tried to have him remove from the position of "" of Norway.

According to 's book "Try and Stop Me," after Hamsun's alliance with the Quislingites became widely known, angry Norwegians sent copies of his books back to his hometown in such numbers that the small post office in the town had to hire temporary workers to assist in handling the volumes of books arriving.

After Hitler's death, Hamsun wrote an in the leading Norwegian newspaper "", describing him as a "warrior for mankind". It has been argued that his "sympathies" were those of a country that had been occupied. He sometimes used his status as a man of fame to improve the conditions of his area during the occupation and criticized the number of executions. Still, following the end of the war, angry crowds burned his books in public in major Norwegian cities.

Hamsun's wartime pronouncements in support of the German occupation regime could easily have been punishable under existing Norwegian treason laws and wartime ordinances passed in relation to treasonous acts.

Hamsun was then confined for several months in a psychiatric hospital. Following a long period of psychological investigation that tormented the author and weakened him considerably, on February 5, 1946 psychiatrist and head doctor concluded that Hamsun had "lasting weakened mental capacities." [ibid., 40-41. See also Gabriel Langfeldt and Ørnulv Ødegård "Den rettspsykiatriske erklæring om Knut Hamsun".] On the basis of this judgement the criminal treason case against Hamsun was dropped.

Instead of a criminal treason trial, a case was raised against the author. Hamsun was called to summons May 16, 1946 in response to the accusation that he was a member of Nasjonal Samling. In contrast to an earlier claim in legal documents that Hamsun, "consented to" membership in the party, the civil liability charge rested on the accusation of the more basic objective question of actual membership in the party. [ibid., 49]

The main hearing of Hamsun's case took place December 16, 1947 and lasted only one day. The judgement in the case was delivered December 19, 1947. In a vote of two to one, he was sentenced to pay civil compensation charges of 425,000 kroner and court costs of 250 kroner. The judges in support of the ruling placed emphasis on the fact that Hamsun was listed in the N.S. party's membership card index and the fact that in a questionnaire sent out by the NS political press office, Hamsun described himself as "Quisling's man." [ibid,. 51-2]

The case was appealed to the Norwegian supreme court on the December 29 and the case was heard by the court from the June 18-19, 1948, with a judgement handed down on the June 23. The supreme court judgement unanimously affirmed the validity of the previous ruling regarding Hamsun's membership but the compensation demanded was reduced to 325,000 kroner and 500 kroner in court costs in light of the reduced financial circumstances of the accused. In its judgement, the court again emphasized that Hamsun was in the party membership index, had a member number, had worn an N.S. symbol on his clothing during the occupation, that he filled out, signed, and returned a questionnaire for a party organization which was based on the assumption of membership, that he had stated he was "Quisling's man" and that in his preliminary hearing on the June 23, 1945 had stated he had "slid into the [N. S.] organization." [ibid., 53-6]

Criticism of the Court Rulings Against Hamsun

The fact that no criminal treason trial was held and Hamsun did not serve a punitive sentence in prison for his wartime actions has not reduced the controversy surrounding the treason proceedings against Norway's most famous 20th century author in the postwar period. Because the civil trial hinged upon the question of membership in the N.S. party, rather than upon Hamsun's support for the German war effort, or praise of Quisling and fascist political ideals, much discussion about the legal aspects of Hamsun's postwar trial has focused on two issues: the validity of the initial judgement of Hamsun's weakened mental faculties, and Hamsun's formal relationship with the wartime fascist N.S. party that led to the court ruling against him.

Critics of the handling of the psychological evaluation of Hamsun in the aftermath of World War II emphasize both the inhumane treatment of the author as well as the final evaluation itself. With respect to the latter, it has been pointed out that some who met Hamsun during this period, including Christian Gierløffs who visited the author at Landvik home for the elderly in the fall of 1945, found Hamsun to be in full command of his mental faculties. It has also been argued that his final 1949 novel "On Overgrown Paths" does not reveal any weakening of Hamsun's mental capacities. Already by June 1946 there were some 47 pages of the original manuscript completed from this work [ibid., 46] .

On the question of Hamsun's membership in N.S. party, critics of the judgement have pointed out that there has never been found any application for party membership submitted by Hamsun to the party, any evidence of Hamsun having paid, as required by the party for continued membership, any of the 2 kroner annual dues to the party, nor has there been found the photograph required for submission to the party membership book. [ibid., 60-65] Despite the huge potential propaganda value of having Norway's most famous writer as a registered party member, N.S. at no point claimed or advertised the supposed membership in their own recruiting efforts in wartime, despite the fact that Hamsun had on occasion written for, or been quoted extensively in party publications. [ibid., 87]

The only time Hamsun made any clear statement regarding membership in N.S. prior to the conclusion of the war was allegedly in December, 1941 in conversation with an N.S. party member when, in response to the suggestion that Hamsun ought to join the party, the author is said to have responded, "No, I don't want to, why would I do that?" [ibid., 68]

The Norwegian national archives do have copies of two original N.S. party member cards for Hamsun, with his membership dated from December 22, 1940 and his membership number listed as 26,000. However, based on internal evidence provided by the cards themselves, they were most likely created sometime in 1942. [ibid., 82]

Hamsun claimed to have been "Quisling's man" as early as the general election in 1936. Hamsun declared, "I have been watching Quisling since his days in Russia. He has personally interested me just as his politics interest me now...If I had ten votes he would get them. His firm character and unbending will are good for us to have in these times." However, there is no evidence that he was a member of N.S. then or even voted in the election of 1936. Hamsun stated to the police in his statement of June 20, 1945 that, "As far I can remember, I have never voted in any election." [ibid., 67]

The author and his postwar ordeal are treated sympathetically in the film by the Swedish director who based the movie "Hamsun" on the controversial 1978 work "The Hamsun Trial" by Danish author . In "Hamsun", the Swedish actor plays Knut Hamsun; his wife, Marie Hamsun, is played by the Danish actress .

* Kierulf, Anine and Schiøtz "Høyesterett og Knut Hamsun" Gyldendal 2004. A Summary and analysis of the postwar legal proceedings against Hamsun. Argues ultimately that Knut Hamsun was guilty of treason that could have been tried in criminal court but the civil trial was legally without merit.
* Kolloen, Ingar Sletten. "Svermeren" 2003 Biography
* Kolloen, Ingar Sletten. "Erobreren" 2004 Biography
* Larsen, Hanna Astrup. "Knut Hamsun" Alfred A. Knopf. 1922 A contemporary biographical treatment culminating in Hamsun's receipt of the Nobel Prize

The , —, issue of "" has a major article by Jeffrey Frank ( [http://www.newyorker.com/critics/content/articles/051226crat_atlarge link here] ). It seems to rely on the Ingar Kolloen biography (two volumes, reportedly aggregating about 1000 pages).

-winning writer was also greatly influenced by Hamsun and translated some of his works.

The book "Mysteries" was the basis of a 1978 film (by the Dutch film company [http://www.sigmapictures.com Sigma Pictures] ), directed by Paul de Lussanet, starring , , Andrea Ferreol and .

* [http://www.natvan.com/national-vanguard/116/hamson.html Knut Hamsun and the Cause of Europe: Article by Mark Deavin, Ph.D.] Article on Hamsun hosted by White supremacist organization, the National Vanguard.