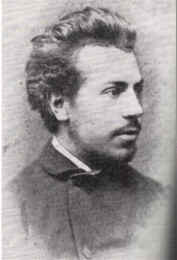 Henrik Pontoppidan (, —, ) was a realist writer who shared with Karl Gjellerup the in 1917 for "his authentic descriptions of present-day life in ." Pontoppidan's novels and short stories - informed with a desire for social progress but despairing, later in his life, of its realization - present an unusually comprehensive picture of his country and his epoch. He was the youngest and perhaps most influential member of the .

The son of a ic vicar and belonging to an old family of vicars and writers, Pontoppidan gave up an education as an engineer, worked as a primary school teacher and finally became a freelance journalist and full-time writer, making his debut in 1881.

The first phase of his work constitutes rebellious social criticism. In matter-of-fact short stories he mercilessly describes the life of the peasants and country proletarians, with whom he lived in close contact. He was perhaps the first Danish progressive writer to break with an idealised portrayal of farmers. The tales from this era are collected in "Landsbybilleder" ("Village Pictures", 1883) and "Fra Hytterne" ("From the Huts", 1887). An important part is his 1890 political collection of short stories "Skyer" ("Clouds"), a biting description of Denmark under the authoritarian semi-dictatorship of the Conservatives both condemning the oppressors and scorning the Danes’ lack of disaffection. After this period he increasingly concentrated on psychological and naturalist problems without giving up his social engagement.

The three novels which are normally considered to be Pontoppidan’s main works were written from about 1890 to 1920. In these works he established on his own terms a Danish version of the "broad description of society" novel in the tradition of and Zola. Centred around a hero he paints a picture of Denmark in the era of the Constitutional Struggle between Conservative and Liberals, rising industrialisation, cultural conflicts and awakening revolutionary movements.
* "Det forjættede Land" (I-III 1891-95, English translation of vol. I-II "The Promised Land" 1896), describes a fantasist and his dream of being a preacher in the country which leads to self-deception and insanity.
* The partly autobiographical "Lykke-Per" (1898-1904) ("Lucky Peter"), perhaps his most famous novel, deals with the self-confident, richly gifted man who breaks with his religious family in order to be an engineer and a conqueror, free of heritage and milieu. However, at the height of his success, they at last catch up with him and he gives up his career to find himself in loneliness.
* The bitter "De dødes Rige" (1912-16, "The Realm of the Dead") shows Denmark after the apparent victory of democracy in 1901, a society in which political ideals are mouldering, capitalism is marching on and press and art are prostituted, all centred about the hopeless love and reform plans of a young progressive squire afflicted by illness.

Pontoppidan's last large novel "Mands Himmerig" (1927, "Man’s Heaven") is an almost desperate description of the crisis of a Danish intellectual at the time of the outbreak of .

Pontoppidan also wrote many short novels and long tales in which he discussed political, psychological and sexual themes. "Isbjørnen" (1887, "The Polar Bear") describes the confrontation between an outspoken vicar from and his narrow-minded Danish provincial clergymen. "Mimoser" (1886, Engl. transl. "The Apothecary’s Daughters", 1890) is an ironic-tragic tale about the exaggerated intolerance of unfaithfulness. "Nattevagt" (1894, "Night Watch") deals with a courageous and revolutionary artist who is nevertheless a frustrated failure as a husband. "Den gamle Adam" (1894, "The Old Adam") deals with both men’s and of sexuality as a whole. "Borgmester Hoeck og Hustru" (1905, Engl. transl. "Burgomaster Hoeck and His Wife", 1999) portrays a tragic marriage dominated by the husband's jealousy and dislike of his wife's "joie de vivre".

A central theme in most of these tales is the difficulties of handling the new tolerance, open-mindedness and democratisation which are introduced by both the transition of society and by literature. Another theme is the conflict between the introverted and closed male nature and the vitality of the woman. Behind all this lies the classic naturalist theme of heritage and milieu against which man has to rebel without quite denying their existence. In his later works he sometimes seems to become a mixture of a castigator of society and a prophet of doom.

Between 1933 and 1943 Pontoppidan wrote two different versions of his "Memoirs", in which he tried to define his own view of his personal development. Though handicapped by blindness and deafness in later life, he continued to take an interest in politics and cultural life until his final years.

As a stylist Pontoppidan has been described a born naturalist.Fact|date=October 2007 His language looks plain, simple and easy but is often loaded with symbols and secret hints, hidden irony and “objective” descriptions. He often revised previous works, rendering them still more simple but also changing their plot or sharpening their attitude.

In spite of being well-known as a man of positions and attitudes Pontoppidan remains one of the most discussed modern Danish writers. This is partly because of his personal character. Pontoppidan was a man of many paradoxes: a clear liberal in his time, but a stern patriot, an anti-clerical puritan, a disillusioned fighting nature, collaborating with socialists and communists but always from an independent and individualist position. But it is also partly due to his style which has often been regarded as ambiguous and impenetrable; his mixture of partiality and objectivity has often confused both readers and critics and in fact liberals, radicals, conservatives, right wingers and socialists have all tried to reflect their own ideals in his works. He has been regarded both as the absolute antagonist of and as his most congenial pupil.

Among all the authors of the Modern Break-Through, Pontoppidan is probably the most influential and longest living. His social critical writings mark him as a pioneer of 20th Century Danish literature. Cultural conservatives have been inspired by his critique of modernism after World War I. Finally, he set a standard of "novels about society" which remains relevant.

* Pontoppidan's brother's daughter-in-law was the famous Danish actress ( [http://www.imdb.com/name/nm0690702/ IMDB] ).
* Pontoppidan is buried in his family's grave site in the cemetery of Kirke.