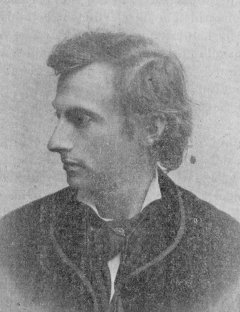 Karl Gjellerup (, &ndash; , ) was a Danish poet and who together with his compatriot won the in 1917. He belonged to the . He occasionally used the Epigonos.

Gjellerup was the son of a vicar in and grew up in a national and romantic idealistic atmosphere. In the 1870s he broke with his background and at first he became an enthusiastic supporter of the naturalist movement and , writing audacious novels about and . Strongly influenced by his origin he gradually left the Brandes line and 1885 he broke totally with the naturalists, becoming a new romanticist. A central trace of his life was his attitude, he felt himself strongly attracted to German culture (his wife was a German) and 1892 he finally settled in Germany, which made him unpopular in Denmark on both the right and left wing. As years passed he totally identified with the German Empire, including its war aims 1914-18.

Among the works of Gjellerup must be mentioned his most important novel "Germanernes Lærling" (1882, i.e. "The German Student"), a partly autobiographic tale of the development of a young man from being a conformist theologian to a pro-German atheist and intellectual. Some Wagnerian dramas show his growing romanticist interests. An important work is the novel "Møllen" (1896, i. e. "The Mill"), a sinister of love and jealousy.

In his last years he was clearly influenced by and Oriental culture. His work "Der Pilger Kamanita"/"Pilgrimen Kamanita" (1906, i.e. "The Pilgrim Kamanita") has been called 'one of the oddest novels written in Danish'. It features the journey of Kamanita, an Indian merchant's son, from earthly prosperity and carnal romance through death and reincarnation towards .

"Den fuldendtes hustru" (1907, i.e. "The wife of the perfect") is a versified drama, inspired by 's "", about 's earthly life as , being inhibited in his spiritual efforts by his wife, . The giant novel "Verdensvandrerne" (1910, i.e. "The world roamers") takes its contemporary starting point in a German female academic on a study tour in India, but evolves across chronological levels, in which characters re-experience what has happened in former s, thus featuring souls roaming from one incarnation to another.

"Rudolph Stens Landpraksis" (1913, i.e. "The country practice of [physician] Rudolph Sten") is set in the rural Zealand of Gjellerup's youth. The main character develops from a liberal, superficial outlook on life, including youthful romantical conflicts, through years of reflection and asketic devotion to duty towards a more mature standpoint, hinting at the author's own course of life.

"Das heiligste Tier" (1919, i.e. "The holiest animal") was Gjellerup's last work. Having elements of self-parody, it is regarded his only attempt of humour. It is a peculiar mythological satire in which animals arrive at their own Elysium after death. These include the snake that killed , ' dog Argos, (the holy cow of India), the donkey of and the horses of various historical commanders in field. The assembly select, after discussion, Buddha's horse as the holiest of animals, but it has left without a trace to follow its master to nirvana.

In Denmark, Gjellerup's Nobel award was received with little enthusiasm. He had long been regarded as a German writer. During various stages of his career, he had made himself impopular with both the naturalist left surrounding and the conservative right. His nomination for the Nobel award was, however, supported from Danish side for several times. Because was neutral during , the divided prize did not arouse political speculations about partial decision, but showed on the other hand allegiance between the Nordic neighbors.

Today Gjellerup is almost forgotten in Denmark. In spite of this, however, littery historians normally regard him as an honest seeker after truth.

Gjellerup's works have been translated into several languages, including German (often translated by himself), Swedish, English, Dutch, Polish and others. "The Pilgrim Kamanita" is his most widely translated book, having been published in several European countries, the United States, as well as in Thailand where excerpts of it have been used in textbooks.