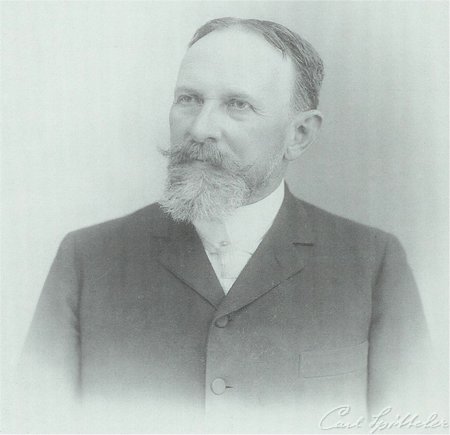 Carl Friedrich Georg Spitteler (, — , ) was a Swiss poet who was awarded the in 1919. His work includes both pessimistic and heroical poems.

Spitteler was born in , and from 1863 he studied law at the . In 1865-1870 he studied theology in the same institution, at and . Later he worked in as tutor, starting from August 1871, remaining there (with some periods in ) until 1879. Later he was elementary teacher in and , as well as journalist for the "Der Kunstwart" and as editor for the "Neue Zürcher Zeitung".

In 1881 Spitteler published the alegoric prose poem "Prometheus and Epimetheus", published under the pseudonym Carl Felix Tandem, and showing contrasts between ideals and dogmas through the two mythological figures of the titles; later he reworked it and published it under his true name, with the title "Prometheus der Dulder" ("Prometheus the Sufferer", 1924). This work later influenced 's theories explained in his "Psychological Types". In 1883 he married Marie op der Hoff, previously his pupil in Neuveville.

In 1900-1905 Spitteler wrote the powerful alegoric-epic poem, in s, "Olympischer Frühling" ("Olympic Spring"). This work, mixing fantastic, naturalistic, religions and mythological themes, deals with human concern towards universe. His prose works include "Die Mädchenfeinde "("Two Little Misogynists", 1907), about his autobiographical childhood experiences, the dramatic "Conrad der Leutnant "(1898), in which he show influence from the previously opposed Naturalism, and the autobiographical novella "Imago" (1906), examining the role of unconscious in the conflict between a creative mind and the middle-class restrictions.

During he opposed to the pro-German attitude of the Swiss German-speaking majority, a position put forward in the essay "Unser Schweizer Standpunkt". In 1919 he won the Nobel Prize. Spitteler died at in 1924.