Rolland was born in Clamecy, Nièvre to a family that had both wealthy townspeople and farmers in its lineage. Writing introspectively in his Voyage intérieur (1942), he sees himself as a representative of an "antique species". He would cast these ancestors in Colas Breugnon (1919).

Accepted to the École normale supérieure in 1886, he first studied philosophy, but his independence of spirit led him to abandon that so as not to submit to the dominant ideology. He received his degree in history in 1889 and spent two years in Rome, where his encounter with Malwida von Meysenbug–who had been a friend of Nietzsche and of Wagner–and his discovery of Italian masterpieces were decisive for the development of his thought. When he returned to France in 1895, he received his doctoral degree with his thesis The origins of modern lyric theatre and his doctoral dissertation, A History of Opera in Europe before Lully and Scarlatti.

His first book was published in 1902, when he was 36 years old. Through his advocacy for a 'people's theatre', he made a significant contribution towards the democratization of the theatre. As a humanist, he embraced the work of the philosophers of India ("Conversations with Rabindranath Tagore" and Mohandas Gandhi). Rolland was strongly influenced by the Vedanta philosophy of India, primarily through the works of Swami Vivekananda.[2]

Rolland's most significant contribution to the theatre lies in his advocacy for a "popular theatre" in his essay The People's Theatre (Le Théâtre du peuple, 1902).[3] "There is only one necessary condition for the emergence of a new theatre", he wrote, "that the stage and auditorium should be open to the masses, should be able to contain a people and the actions of a people".[4] The book was not published until 1913, but most of its contents had appeared in the Revue d'Art Dramatique between 1900 and 1903. Rolland attempted to put his theory into practice with his melodramatic dramas about the French Revolution, Danton (1900) and The Fourteenth of July (1902), but it was his ideas that formed a major reference point for subsequent practitioners.[3]

The essay is part of a more general movement around the turn of that century towards the democratization of the theatre. The Revue had held a competition and tried to organize a "World Congress on People's Theatre", and a number of People's Theatres had opened across Europe, including the Freie Volksbühne movement ('Free People's Theatre') in Germany and Maurice Pottecher's Théâtre du Peuple in France. Rolland was a disciple of Pottecher and dedicated The People's Theatre to him.

Rolland's approach is more aggressive, though, than Pottecher's poetic vision of theatre as a substitute 'social religion' bringing unity to the nation. Rolland indictes the bourgeoisie for its appropriation of the theatre, causing it to slide into decadence, and the deleterious effects of its ideological dominance. In proposing a suitable repertoire for his people's theatre, Rolland rejects classical drama in the belief that it is either too difficult or too static to be of interest to the masses. Drawing on the ideas of Jean-Jacques Rousseau, he proposes instead "an epic historical theatre of 'joy, force and intelligence' which will remind the people of its revolutionary heritage and revitalize the forces working for a new society" (in the words of Bradby and McCormick, quoting Rolland).[6] Rolland believed that the people would be improved by seeing heroic images of their past. Rousseau's influence may be detected in Rolland's conception of theatre-as-festivity, an emphasis that reveals a fundamental anti-theatrical prejudice: "Theatre supposes lives that are poor and agitated, a people searching in dreams for a refuge from thought. If we were happier and freer we should not feel hungry for theatre. [...] A people that is happy and free has need of festivities more than of theatres; it will always see in itself the finest spectacle."[7] 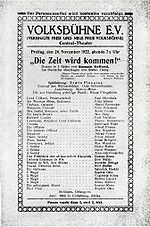 Programme sheet for Piscator's 1922 production of Rolland's drama The Time Will Come (1903), at the Central-Theater in Berlin.

Rolland's dramas have been staged by some of the most influential theatre directors of the twentieth century, including Max Reinhardt and Erwin Piscator.[8] Piscator directed the world première of Rolland's pacifist drama The Time Will Come (Le Temps viendra, written in 1903) at Berlin's Central-Theater, which opened on 17 November 1922 with music by K Pringsheim and scenic design by O Schmalhausen and M Meier.[9] The play addresses the connections between imperialism and capitalism, the treatment of enemy civilians, and the use of concentration camps, all of which are dramatised via an episode in the Boer War.[10] Piscator described his treatment of the play as "thoroughly naturalistic", whereby he sought "to achieve the greatest possible realism in acting and decor."[11] Despite the play's overly-rhetorical style, the production was reviewed positively.[10]

Rolland's most famous novel is the 10-volume roman-fleuve Jean-Christophe (1903–1912), which brings "together his interests and ideals in the story of a German musical genius who makes France his second home and becomes a vehicle for Rolland's views on music, social matters and understanding between nations".[12] His other novels are Colas Breugnon (1919), Clérambault (1920), Pierre et Luce (1920) and his second roman-fleuve, the 7-volume L'âme enchantée (1922–1933).

He became a history teacher at Lycée Henri IV, then at the Lycée Louis le Grand, and member of the École française de Rome, then a professor of the History of Music at the Sorbonne, and History Professor at the École Normale Supérieure.

A demanding, yet timid, young man, he did not like teaching. He was not indifferent to youth: Jean-Christophe, Olivier and their friends, the heroes of his novels, are young people. But with real-life persons, youths as well as adults, Rolland maintained only a distant relationship. He was first and foremost a writer. Assured that literature would provide him with a modest income, he resigned from the university in 1912. 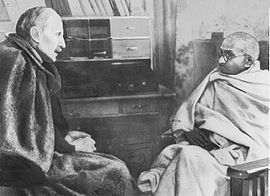 Rolland with Gandhi in Switzerland, 1931.
The two were friends and regular correspondents.

Romain Rolland was a lifelong pacifist. He protested against the first World War in Au-dessus de la Mêlée (1915), Above the Battle (Chicago, 1916). In 1924, his book on Gandhi contributed to the Indian nonviolent leader's reputation and the two men met in 1931.

In 1928 he and Hungarian scholar, philosopher and natural living experimenter Edmund Bordeaux Szekely founded the International Biogenic Society to promote and expand on their ideas of the integration of mind, body and spirit.

He moved to Villeneuve, on the shores of Lac Léman (Lake Geneva) to devote himself to writing. His life was interrupted by health problems, and by travels to art exhibitions. His voyage to Moscow (1935), on the invitation of Maxim Gorky, was an opportunity to meet Joseph Stalin, whom he considered the greatest man of his time.[citation needed] Rolland served unofficially as ambassador of French artists to the Soviet Union. However, as a pacifist, he was uncomfortable with Stalin’s brutal repression of the opposition. He attempted to discuss his concerns with Stalin, and was involved in the campaign for the release of the Left Opposition activist/writer Victor Serge and wrote to Stalin begging clemency for Nikolai Bukharin. During Serge’s imprisonment (1933–1936), Rolland had agreed to handle the publications of Serge’s writings in France, despite their political disagreements.

In 1937, he came back to live in Vézelay, which, in 1940, was occupied by the Germans. During the occupation, he isolated himself in complete solitude.

Never stopping his work, in 1940, he finished his memoirs. He also placed the finishing touches on his musical research on the life of Ludwig van Beethoven. Shortly before his death, he wrote Péguy (1944), in which he examines religion and socialism through the context of his memories. He died on 30 December 1944 in Vézelay.

In 1921, his close friend, the Austrian writer Stefan Zweig, wrote his biography: The Man and His Works. Zweig profoundly admired Rolland, of whom he once said to be: "the moral consciousness of Europe" during the years of turmoil and War in Europe.

1923 saw the beginning of a correspondence between the famous psychoanalyst Sigmund Freud and Rolland, who found that the admiration that he showed for Freud was reciprocated in equal measures (Freud proclaiming in a letter to him: "That I have been allowed to exchange a greeting with you will remain a happy memory to the end of my days.").[13] This correspondence introduced Freud to the concept of the "oceanic feeling" that Rolland had developed through his study of Eastern mysticism. Freud opened his next book Civilization and its Discontents (1929) with a debate on the nature of this feeling, which he mentioned had been noted to him by an anonymous "friend". This friend was Rolland. Rolland would remain a major influence on Freud's work, continuing their correspondence right up to Freud's death in 1939.[14]