Gorky was born in Nizhny Novgorod and became an orphan at the age of nine. In 1880, at the age of twelve, he ran away from home in an effort to find his grandmother. Gorky was brought up by his grandmother.[2] Her death deeply affected him, and after an attempt at suicide in December 1887, he travelled on foot across the Russian Empire for five years, changing jobs and accumulating impressions used later in his writing.[2]

As a journalist working for provincial newspapers, he wrote under the pseudonym Иегудиил Хламида (Jehudiel Khlamida). The name is suggestive of "cloak-and-dagger" by the similarity to the Greek chlamys, "cloak").[3] He began using the pseudonym Gorky (literally "bitter") in 1892, while working in Tiflis for the newspaper Кавказ (The Caucasus).[4] The name reflected his simmering anger about life in Russia and a determination to speak the bitter truth. Gorky's first book Очерки и рассказы (Essays and Stories) in 1898 enjoyed a sensational success and his career as a writer began. Gorky wrote incessantly, viewing literature less as an aesthetic practice (though he worked hard on style and form) than as a moral and political act that could change the world. He described the lives of people in the lowest strata and on the margins of society, revealing their hardships, humiliations, and brutalization, but also their inward spark of humanity.[2]

Gorky’s reputation as a unique literary voice from the bottom strata of society and as a fervent advocate of Russia's social, political, and cultural transformation grew. By 1899, he was openly associating with the emerging Marxist social-democratic movement which helped make him a celebrity among both the intelligentsia and the growing numbers of "conscious" workers. At the heart of all his work was a belief in the inherent worth and potential of the human person (личность, 'lichnost'). In his writing, he counterposed individuals, aware of their natural dignity, and inspired by energy and will, with people who succumb to the degrading conditions of life around them. Both his writings and his letters reveal a "restless man" (a frequent self-description) struggling to resolve contradictory feelings of faith and skepticism, love of life and disgust at the vulgarity and pettiness of the human world.

He publicly opposed the Tsarist regime and was arrested many times. Gorky befriended many revolutionaries and became Lenin's personal friend after they met in 1902. He exposed governmental control of the press (see Matvei Golovinski affair). In 1902, Gorky was elected an honorary Academician of Literature, but Nicholas II ordered this annulled. In protest, Anton Chekhov and Vladimir Korolenko left the Academy.[5] 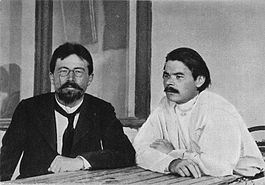 The years 1900 to 1905 saw a growing optimism in Gorky’s writings. He became more involved in the opposition movement, for which he was again briefly imprisoned in 1901. In 1904, having severed his relationship with the Moscow Art Theatre in the wake of conflict with Vladimir Nemirovich-Danchenko, Gorky returned to Nizhny Novgorod to establish a theatre of his own.[6] Both Constantin Stanislavski and Savva Morozov provided financial support for the venture.[7] Stanislavski saw in Gorky's theatre an opportunity to develop the network of provincial theatres that he hoped would reform the art of the stage in Russia, of which he had dreamed since the 1890s.[7] He sent some pupils from the Art Theatre School—as well as Ioasaf Tikhomirov, who ran the school—to work there.[7] By the autumn, however, after the censor had banned every play that the theatre proposed to stage, Gorky abandoned the project.[7] Now a financially-successful author, editor, and playwright, Gorky gave financial support to the Russian Social Democratic Labour Party (RSDLP), as well as supporting liberal appeals to the government for civil rights and social reform. The brutal shooting of workers marching to the Tsar with a petition for reform on January 9, 1905 (known as the "Bloody Sunday"), which set in motion the Revolution of 1905, seems to have pushed Gorky more decisively toward radical solutions. He now became closely associated with Vladimir Lenin's Bolshevik wing of the party—though it is not clear whether he ever formally joined and his relations with Lenin and the Bolsheviks would always be rocky. His most influential writings in these years were a series of political plays, most famously The Lower Depths (1902). In 1906, the Bolsheviks sent him on a fund-raising trip to the United States, where in the Adirondack Mountains Gorky wrote his famous novel of revolutionary conversion and struggle, Мать (Mat’, The Mother). His experiences there—which included a scandal over his traveling with his lover rather than his wife—deepened his contempt for the "bourgeois soul" but also his admiration for the boldness of the American spirit. While briefly imprisoned in Peter and Paul Fortress during the abortive 1905 Russian Revolution, Gorky wrote the play Children of the Sun, nominally set during an 1862 cholera epidemic, but universally understood to relate to present-day events. 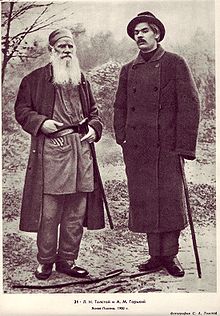 From 1906 to 1913, Gorky lived on the island of Capri, partly for health reasons and partly to escape the increasingly repressive atmosphere in Russia.[2] He continued to support the work of Russian social-democracy, especially the Bolsheviks, and to write fiction and cultural essays. It was during this time that Gorky first met Vladimir Illych Lenin. Most controversially, he articulated, along with a few other maverick Bolsheviks, a philosophy he called "God-Building",[2] which sought to recapture the power of myth for the revolution and to create a religious atheism that placed collective humanity where God had been and was imbued with passion, wonderment, moral certainty, and the promise of deliverance from evil, suffering, and even death. Though 'God-Building' was suppressed by Lenin, Gorky retained his belief that "culture"—the moral and spiritual awareness of the value and potential of the human self—would be more critical to the revolution’s success than political or economic arrangements.

An amnesty granted for the 300th anniversary of the Romanov Dynasty allowed Gorky to return to Russia in 1913, where he continued his social criticism, mentored other writers from the common people, and wrote a series of important cultural memoirs, including the first part of his autobiography.[2] On returning to Russia, he wrote that his main impression was that "everyone is so crushed and devoid of God's image." The only solution, he repeatedly declared, was "culture".

During World War I, his apartment in Petrograd was turned into a Bolshevik staff room, and his politics remained close to the Bolsheviks throughout the revolutionary period of 1917. These relations became strained, however, after his newspaper Novaya Zhizn (Новая Жизнь, "New Life") fell prey to Bolshevik censorship during the ensuing civil war, around which time Gorky published a collection of essays critical of the Bolsheviks called Untimely Thoughts in 1918. (It would not be re-published in Russia until after the collapse of the Soviet Union.) The essays call Lenin a tyrant for his senseless arrests and repression of free discourse, and an anarchist for his conspiratorial tactics; Gorky compares Lenin to both the Tsar and Nechayev.[citation needed]

In August 1921, Nikolai Gumilyov, his friend and fellow writer was arrested by the Petrograd Cheka for his monarchist views. Gorky hurried to Moscow, obtained an order to release Gumilyov from Lenin personally, but upon his return to Petrograd he found out that Gumilyov had already been shot. In October, Gorky returned to Italy on health grounds: he had tuberculosis. 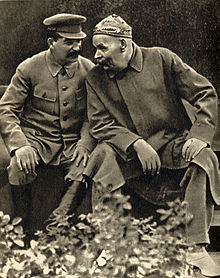 Gorky with Joseph Stalin near the Kremlin in 1931

According to Alexander Solzhenitsyn, Gorky's return to the Soviet Union was motivated by material needs. In Sorrento, Gorky found himself without money and without fame. He visited the USSR several times after 1929, and in 1932 Josef Stalin personally invited him to return for good, an offer he accepted. In June 1929, Gorky visited Solovki (cleaned up for this occasion) and wrote a positive article about that Gulag, which had already gained ill fame in the West. Later he stated that everything he had written was under the control of censors[citation needed]. What he actually saw and thought when visiting the camp has been a highly discussed topic[citation needed].

Gorky's return from Fascist Italy was a major propaganda victory for the Soviets. He was decorated with the Order of Lenin and given a mansion (formerly belonging to the millionaire Ryabushinsky, now the Gorky Museum) in Moscow and a dacha in the suburbs. One of the central Moscow streets, Tverskaya, was renamed in his honor, as was the city of his birth. The largest fixed-wing aircraft in the world in the mid-1930s, the Tupolev ANT-20 (photo) was named Maxim Gorky in his honor.

On October 11, 1931 Gorky read his fairy tale "A Girl and Death" to his visitors Josef Stalin, Kliment Voroshilov and Vyacheslav Molotov, an event that was later depicted by Viktor Govorov in his painting. On that same day Stalin left his autograph on the last page of this work by Gorky: "Эта штука сильнее чем "Фауст" Гёте (любовь побеждает смерть)"[8]( "This piece is stronger than Goethe's Faust (love defeats death)". In 1933 Gorky edited an infamous book about the White Sea-Baltic Canal, presented as an example of "successful rehabilitation of the former enemies of proletariat". With the increase of Stalinist repression and especially after the assassination of Sergei Kirov in December 1934, Gorky was placed under unannounced house arrest in his house near Moscow.

The sudden death of Gorky's son Maxim Peshkov in May 1934 was followed by the death of Maxim Gorky himself in June 1936. Speculation has long surrounded the circumstances of his death. Stalin and Molotov were among those who carried Gorky's coffin during the funeral. During the Bukharin trials in 1938, one of the charges was that Gorky was killed by Yagoda's NKVD agents.[9]

In Soviet times, before and after his death, the complexities in Gorky's life and outlook were reduced to an iconic image (echoed in heroic pictures and statues dotting the countryside): Gorky as a great Soviet writer who emerged from the common people, a loyal friend of the Bolsheviks, and the founder of the increasingly canonical "socialist realism".

The Gorky Trilogy is a series of three feature films: The Childhood of Maxim Gorky, My Apprenticeship, and My Universities, directed by Mark Donskoi, filmed in the Soviet Union, released 1938-1940. The trilogy was adapted from Gorky's autobiography.

The German modernist Bertolt Brecht based his epic play The Mother (1932) on Gorky's novel of the same name. Gorky's novel was also adapted for an opera by Valery Zhelobinsky in 1938. In 1912, the Italian composer Giacomo Orefice based his opera Radda on the character of Radda from Makar Chudra.

Enemies by Gorky was performed in 1984 with a multi-national cast in a co-production between Internationalist Theatre and The Richard Steel company . The play was directed by Ann Pennington and designed by Paul Brown. Presented at London's Richard Steel fringe theatre, the BBC Russian language service gave the production glowing reviews. Angelique Rockas played the part of the actress Tatiana.