Bolshevik
This article is about the Bolshevik faction in the RSDLP 1903-1912. For other uses, see Bolshevik (disambiguation). 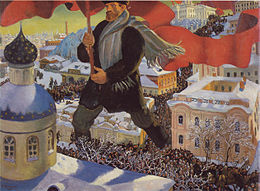 The Bolsheviks were the majority faction in a crucial vote, hence their name. They ultimately became the Communist Party of the Soviet Union.[5] The Bolsheviks came to power in Russia during the October Revolution phase of the Russian Revolution of 1917, and founded the Russian Soviet Federative Socialist Republic which would later in 1922 become the chief constituent of the Soviet Union.

The Bolsheviks, founded by Vladimir Lenin, were by 1905 a mass organization consisting primarily of workers under a democratic internal hierarchy governed by the principle of democratic centralism, who considered themselves the leaders of the revolutionary working class of Russia. Their beliefs and practices were often referred to as Bolshevism. Bolshevik revolutionary leader Leon Trotsky commonly used the terms "Bolshevism" and "Bolshevist" after his exile from the Soviet Union to differentiate between what he saw as true Leninism and the regime within the state and the party which arose under Stalin.

History of the split

In the 2nd Congress of the Russian Social Democratic Labour Party, held in Brussels and London during August 1903, Lenin and Martov disagreed over the membership rules. Lenin wanted members "who recognise the Party Programme and support it by material means [6] and by personal participation in one of the party's organisations." Julius Martov suggested "by regular personal assistance under the direction of one of the party's organisations." Lenin advocated limiting party membership to a smaller core of active members, as opposed to "card carriers" who might only be active in party branches from time to time or not at all. This active base would develop the cadre, a core of "professional revolutionaries", consisting of loyal communists who would spend the majority of their time organising the party toward a mass revolutionary party capable of leading a workers' revolution against the Tsarist autocracy.

The base of active and experienced members would be the recruiting ground for this professional core. Sympathizers would be left outside and the party would be organised based on the concept of democratic centralism. Martov, until then a close friend of Lenin, agreed with him that the core of the party should consist of professional revolutionaries, but argued that party membership should be open to sympathizers, revolutionary workers and other fellow travelers.

The two had disagreed on the issue as early as March-May 1903, but it was not until the Congress that their differences became irreconcilable and split the party.[7] Although at first the disagreement appeared to be minor and inspired by personal conflicts, for example, Lenin's insistence on dropping less active editorial board members from Iskra or Martov's support for the Organizing Committee of the Congress which Lenin opposed, the differences quickly grew and the split became irreparable.

The two factions were originally known as "hard" (Lenin's supporters) and "soft" (Martov's supporters). Soon, however, the terminology changed to "Bolsheviks" and "Mensheviks", from the Russian "bolshinstvo" (majority) and "menshinstvo" (minority), based on the fact that Lenin's supporters narrowly defeated Martov's supporters on the question of party membership. Neither Lenin nor Martov had a firm majority throughout the Congress as delegates left or switched sides. At the end, the Congress was evenly split between the two factions.

From 1907 on, English language articles sometimes used the term "Maximalist" for "Bolshevik" and "Minimalist" for "Menshevik", which proved confusing since there was also a "Maximalist" faction within the Russian Socialist-Revolutionary Party in 1904–1906 (which after 1906 formed a separate Union of Socialists-Revolutionaries Maximalists) and then again after 1917.[8]

Composition of the party

The two factions were in a state of flux in 1903–1904 with many members changing sides. The founder of Russian Marxism, Georgy Plekhanov, who was at first allied with Lenin and the Bolsheviks, parted ways with them by 1904. Leon Trotsky at first supported the Mensheviks, but left them in September 1904 over their insistence on an alliance with Russian liberals and their opposition to a reconciliation with Lenin and the Bolsheviks. He remained a self-described "non-factional social democrat" until August 1917 when he joined Lenin and the Bolsheviks as their positions assembled and he came to believe that Lenin was right on the issue of the party.

All but one members of the Central Committee were arrested in Moscow in early 1905. The remaining member, with the power of appointing a new one, was won over by the Bolsheviks.[12]

The Bolsheviks played a relatively minor role in the 1905 Revolution, and were a minority in the St. Petersburg Soviet of Workers' Deputies led by Trotsky. The less significant Moscow Soviet, however, was dominated by the Bolsheviks. These soviets became the model for those formed in 1917.

As the Russian Revolution of 1905 progressed, Bolsheviks, Mensheviks and smaller non-Russian social democratic parties operating within the Russian Empire attempted to reunify at the Fourth (Unification) Congress of the RSDLP held at Folkets hus, Norra Bantorget in Stockholm, April 1906. When the Mensheviks struck an alliance with the Jewish Bund, the Bolsheviks found themselves in a minority.

However, all factions retained their respective factional structure and the Bolsheviks formed the Bolshevik Center, the de-facto governing body of the Bolshevik faction within the RSDLP. At the Fifth Congress held in London in May 1907, the Bolsheviks were in the majority, but the two factions continued functioning mostly independently of each other.

With the defeat of the revolution in mid-1907 and the adoption of a new, highly restrictive election law, the Bolsheviks began debating whether to boycott the new parliament known as the Third Duma. Lenin and his supporters Grigory Zinoviev and Lev Kamenev argued for participating in the Duma while Lenin's deputy philosopher Alexander Bogdanov, Anatoly Lunacharsky, Mikhail Pokrovsky and others argued that the social democratic faction in the Duma should be recalled[citation needed].

The latter became known as recallists ("otzovists" in Russian). A smaller group within the Bolshevik faction demanded that the RSDLP central committee should give its sometimes unruly Duma faction an ultimatum, demanding complete subordination to all party decisions. This group became known as "ultimatists" and was generally allied with the recallists.

With a majority of Bolshevik leaders either supporting Bogdanov or undecided by mid-1908 when the differences became irreconcilable, Lenin concentrated on undermining Bogdanov's reputation as a philosopher. In 1909 he published a scathing book of criticism entitled Materialism and Empiriocriticism (1909),[13] assaulting Bogdanov's position and accusing him of philosophical idealism.[14] In June 1909, Bogdanov proposed the formation of Party Schools as "Proletarian Universities" at a Bolshevik mini-conference in Paris organised by the editorial board of the Bolshevik magazine Proletary in June 1909. However this was not accepted and Lenin tried to expel him from the Bolshevik faction.[15] Bogdanov was then involved with setting up Vpered, which ran the Capri Party School from August to December 1909[16].

With both Bolsheviks and Mensheviks weakened by splits within their ranks and by Tsarist repression, they were tempted to try to re-unite the party. In January 1910, Leninists, recallists and various Menshevik factions held a meeting of the party's Central Committee in Paris. Kamenev and Zinoviev were dubious about the idea, but were willing to give it a try under pressure from "conciliator" Bolsheviks like Victor Nogin.

Lenin was firmly opposed to any re-unification, but was outvoted within the Bolshevik leadership. The meeting reached a tentative agreement and one of its provisions made Trotsky's Vienna-based Pravda a party-financed 'central organ'. Kamenev, Trotsky's brother-in-law, was added to the editorial board from the Bolsheviks, but the unification attempts failed in August 1910 when Kamenev resigned from the board amid mutual recriminations.

The factions permanently broke off relations in January 1912 after the Bolsheviks organised a Bolsheviks-only Prague Party Conference and formally expelled Mensheviks and recallists from the party. As a result, they ceased to be a faction in the RSDLP and instead declared themselves an independent party, called Russian Social Democratic Labour Party (bolsheviks) - or RSDLP(b). Unofficially the Party has been referred to as the "Bolshevik Party". Throughout the century, the Party adopted a number of different names. In 1918, RSDLP(b) became (All-)Russian Communist Party (bolsheviks) and remained so until 1925. From 1925-52 the name was All-Union Communist Party (bolsheviks), and from 1952-91 Communist Party of the Soviet Union.

Although the Bolshevik leadership decided to form a separate party, convincing pro-Bolshevik workers within Russia to follow suit proved difficult. When the first meeting of the Fourth Duma was convened in late 1912, only one out of six Bolshevik deputies, Matvei Muranov, (another one, Roman Malinovsky, was later exposed as an Okhrana [Tsarist secret police] agent) voted to break away from the Menshevik faction within the Duma on 15 December 1912.[17] The Bolshevik leadership eventually prevailed and the Bolsheviks formed their own Duma faction in September 1913.

The Bolsheviks believed in organising a party in a centralised and disciplined fashion that sought to overthrow the Tsar through a mass workers' revolution. They believed and succeeded in creating a vanguard party, a mass revolutionary party composed of what they called "the most militant and class-conscious" workers capable of leading the masses of Russian workers.

Although the Bolsheviks were not monolithic, they were characterised by a rigid adherence to the leadership of the central committee, based on the principles of democratic centralism. The Mensheviks favored open party membership and espoused cooperation with the other socialist and some non-socialist groups in Russia. Bolsheviks generally refused to co-operate with liberal or radical parties, viewing them as "bourgeois" parties, or even eventually other socialist organisations, although Lenin sometimes made tactical alliances. 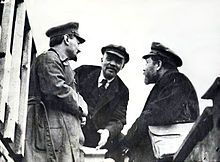 From Bolshevism to Communism

In 1952 at the XIX Party Congress Stalin declared: "There are no more Mensheviks. Why should we call ourselves Bolsheviks? We are not the majority, but the whole party."[citation needed] According to his suggestion, the Bolshevik party was renamed the Communist Party of Soviet Union. Since that time, the term Bolshevik has been regarded as obsolete, and relevant only to the pre-Revolutionary times, during the Russian Revolution itself and the Russian Civil War which followed.

During the days of the Cold War in the United Kingdom, labour union leaders and other leftists were sometimes derisively described as "Bolshie". The usage is roughly equivalent to the term "Commie", "Red" or "pinko" in the United States during the same period. Adolf Hitler, Joseph Goebbels and other Nazi leaders used it in reference to the worldwide revolutionary movement coordinated by the Soviet Union.[18]