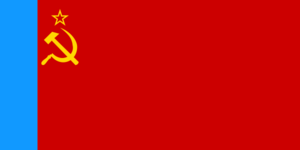 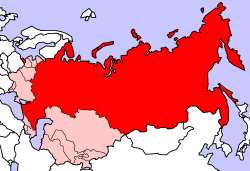 capital =
language = Russian
Lang-ISO = ru
established = ,
ussr-start = ,
ussr-end =
area-rank = 1st
area = 17,075,200
water = 13%
pop-rank = 1st
pop = 147,386,000
density = 8.6
time-zone = + 2 to + 11 (modern Russia is + 3 to + 12)
medals = The Russian Soviet Federative Socialist Republic ( _ru. Росси́йская Сове́тская Федерати́вная Социалисти́ческая Респу́блика [РСФСР] "Rossiyskaya Sovetskaya Federativnaya Sotsialisticheskaya Respublika [RSFSR] "), also called the Russian Soviet Federated Socialist Republic, the Russian SFSR and the RSFSR for short, was the largest and most populous of the fifteen Soviet republics of the and became the after the collapse of the Soviet Union. It was by far the largest sub-national entity in the world by area and 2nd in population after , India. After the dissolution of the Soviet Union, , China became the 2nd most populous subnational entity until 1997 when it was divided. The capital was , also the capital of the Soviet Union.

RSFSR was established on , , and on the 1918 Constitution was accepted. In English, the term is commonly used for the period 1917&ndash;1922. In Russian official documents of the time it was referred to as Russian Republic ( _ru. Российская Республика "Rossiyskaya Respublika") and Soviet Republic (Советская Республика "Sovetskaya Respublika"). RSFSR was only internationally recognized by only a few states, the , , , and . The four last-mentioned countries recognized the Soviet Russia in the , 1921. The RSFSR became part of the Soviet Union in 1922, an act formalised by the .
transferred from the Russian SFSR to the in 1955.

The voted to leave the Soviet Union on December 12, 1991. The country was renamed the on .

s (ASSRs) within the Russian SFSR