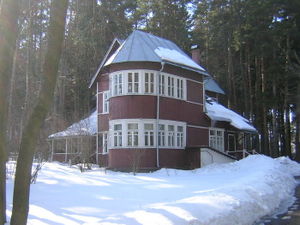 Dacha of Boris Pasternak in Peredelkino

да́ча​ (help·info)) is a Russian word for seasonal or year-round second homes often located in the exurbs of Soviet and post-Soviet cities. Cottages or shacks serving as family's main or only home (or districts of such buildings) are not considered dachas, although many purpose-built dachas are recently being converted for year-round residence. In some cases, dachas are occupied for part of the year by their owners and rented out to urban residents as summer retreats.

Dachas are very common in Russia, and are also widespread in most parts of the former Soviet Union. It is estimated that about 50% of Russian families living in large cities have dachas.[1]

As the size and type of dacha buildings was severely restricted during the Soviet time, some permitted features, such as attics and glazed verandas, became extremely widespread and often oversized. During the 1963–1985 period, these limitations were especially strict: only single-story summer houses without permanent heating and with living areas less than 25 m² were allowed as second housing (though older dachas that didn't meet these requirements continued to exist). Since 1990, all such limitations have been eliminated.

Anyone who permanently dwells in a dacha is colloquially called a dachnik (дачник); the term usually refers to a whole distinctive lifestyle. 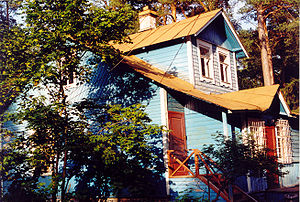 An old dacha near Saint Petersburg 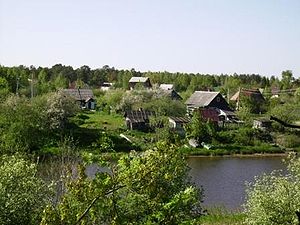 The first dachas in Russia began to appear during the reign of Peter the Great. Initially they were small estates in the country, which were given to loyal vassals by the tsar. In archaic Russian, the word dacha means something given.

During the Age of Enlightenment, Russian aristocracy used their dachas for social and cultural gatherings, which were usually accompanied by masquerade balls and fireworks displays. The Industrial Revolution brought about a rapid growth in the urban population, and urban residents increasingly desired to escape the heavily polluted cities, at least temporarily. By the end of the 19th century, the dacha became a favorite summer retreat for the upper and middle classes of Russian society.

After the Bolshevik revolution of 1917, most dachas were nationalized. Some were converted into vacation homes for the working class, while others, usually of better quality, were distributed among the prominent functionaries of the Communist Party and the newly emerged cultural and scientific elite. All but a few dachas remained the property of the state and the right to use them was usually revoked when a dacha occupant was dismissed or fell out of favor with the rulers of the state. Joseph Stalin's favourite Dacha was in Gagra, Abkhazia.[2] The construction of new dachas was restricted until the late 1940s and required the special approval of the Communist Party leadership.

The period after World War II saw a moderate growth in dacha development. Since there was no actual law banning the construction of dachas, squatters began occupying unused plots of land near cities and towns, some building sheds, huts, and more prominent dwellings that served as dachas. This practice of squatting was spurred by the desire of urban dwellers, all living in multi-storey apartment buildings, to spend some time close to nature, and also to grow their own fruits and vegetables. The latter was caused by the failure of the centrally planned Soviet agricultural program to supply enough fresh produce. As time passed, the number of squatters grew geometrically and the government had no choice but to officially recognize their right to amateur farming. The 1955 legislation introduced a new type of legal person into the Soviet juridical system, a gardeners' partnership (садоводческое товарищество, sadovodcheskoye tovarishchestvo), distinct from the internationally popular community gardens. The gardeners' partnership received the right to permanent use of land exclusively for agricultural purposes and permission to connect to public electrical and water supply networks. In 1958, yet another form of organization was introduced, a cooperative for dacha construction (дачно-строительный кооператив, dachno-stroytelniy kooperativ), which recognized the right of an individual to build a small house on the land leased from the government.

The 1980s saw the peak of the dacha boom with virtually every affluent family in the country having a dacha of their own or spending weekends and holidays at friends' dachas. Often ill-equipped and without indoor plumbing, dachas were nevertheless the ultimate solution for millions of working class families to having an inexpensive summer retreat. Having a piece of land also offered an opportunity for city dwellers to indulge themselves in growing their own fruits and vegetables. To this day, May Day holidays remain a feature of Russian life allowing urban residents a long weekend to plant seeds and tend fruit trees as the ground defrosts from the long Russian winter.[citation needed] Since there are no other national holidays that are long enough for planting, many employers give their staff an extra day off specifically for that purpose.[citation needed]

The collapse of communism in the Soviet Union saw the return to private land ownership. Most dachas have since been privatized and Russia is now the nation with the largest number of owners of second homes.[citation needed] The growth of living standards in recent years allowed many dacha owners to spend their discretionary income on improvements. Thus, many recently built dachas are fully equipped houses suitable for use as permanent residences. The market-oriented economy transformed the dacha into an asset, which generally reflects the prosperity of its owner and can be freely traded in the real estate market.

Due to the rapid increase in urbanization in Russia, many village houses are currently being sold to be used as dachas. Many Russian villages now have dachniki as temporary residents. Some villages have been fully transformed into dacha settlements, while some older dacha settlements often look like more permanent lodgings. The advantages of purchasing a dacha in a village usually are: lower costs, greater land area, and larger distances between houses. The disadvantages may include: lower-quality utilities, less security, and typically a farther distance to travel. 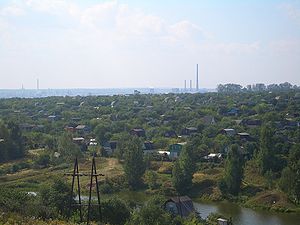 One of many dacha co-ops surrounding Kstovo (Nizhny Novgorod Oblast)

The dacha plots (usually not more than 600 m² for Soviet collective farm labourers, more in other cases, often 1200 or 1500 m², but virtually never exceeding 0.96 ha) are too small to grow the needed amount of fruits and vegetables[citation needed], thus sometimes they are also grown on separate dedicated plots of ground. In Soviet times and sometimes now, such dedicated plots of ground often were made of the unused sections of agricultural fields owned by collective farms. However, in rural areas, many dacha owners own a greater land area, and are able to grow the needed amount of fruits and vegetables right on their plot.

Many small dacha plots, especially the ones that were recently purchased, are not used for large-scale fruit and vegetable farming. Instead, they are frequently used for gardening and planting exotic plants.

Due to the high costs of good equipment, even relatively large plots of ground are often cultivated manually using instruments such as a spade or a spading fork. In autumn the grown potatoes and other crops are gathered and transported to the city where they are stored in cellars, dugouts (usually located on unused plots of ground), or in personal automobile garages.

Many Russians prefer to grow vegetables themselves because of the widespread (especially among the older part of the population) belief in the excessive use of agrochemicals in the store-bought vegetables, and the higher costs of the vegetables in the stores and bazaars. Also, growing one's own food supplies is a long-lived Russian tradition. Many affluent Russians practice that tradition.

The means of transportation for people to get to their dachas, besides cars, are "water trams", buses and electric trains, colloquially called "elektrichka" (электри́чка). Due to the high number of people traveling to dachas during the weekends (especially during the summer), traffic typically builds up around large cities, and elektrichkas and buses become filled up. 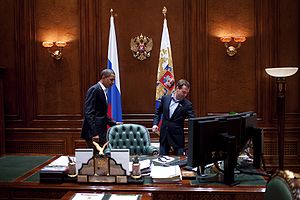 The state-owned vacation houses allotted for government officials, academicians, military personnel, and other VIPs are called "gosdachas" (госдача, short for государственная дача — "state dacha"). In modern Russia, the Federal Property Agency of Russia continues to own numerous estates throughout the country that are leased, often on non-market terms, to government officials. The President of Russia has official dacha residences in Zavidovo and Novo-Ogaryovo. Gosdachas in Komarovo and Peredelkino, Zhukovka, Barvikha, and Usovo and Rublyovka in Moscow are populated by many Soviet-era intellectuals and artists. Former Russian President Vladimir Putin has a dacha in Ozero.

In modern times, the rise of a new class in the Russian society (the 'new Russians') has added a new dimension to the concept of dacha.

With construction costs often reaching into the millions of US dollars, the dachas of the country's elite bear no resemblance to Soviet-era small garden houses. Most dachas of the elite are constructed with brick and concrete, unlike the middle-class dachas that are mostly constructed with wood. Comparable in size and décor to mansions and palaces, they become an elaborate display of social status, wealth and power. These new symbols of prosperity are designed by professional architects, usually in eclectic style that reflect the nouveau-riche tastes of their owners, and feature numerous luxury items such as marble statues, fountains and exotic plants. Some have state-of-the-art sporting facilities such as an indoor swimming pool, multiple tennis courts and stables for race horses. A few privately owned estates even have small forests and lakes.

Many of Russia's oligarchs and successful entrepreneurs, athletes, pop musicians, and mafia bosses now choose their dachas as their primary residence. As such, their estates are often surrounded by solid fences equipped with barbed wire, surveillance cameras, and/or motion detectors and are sometimes even protected by heavily armed guards.

Types of houses or gardens similar to the dacha: