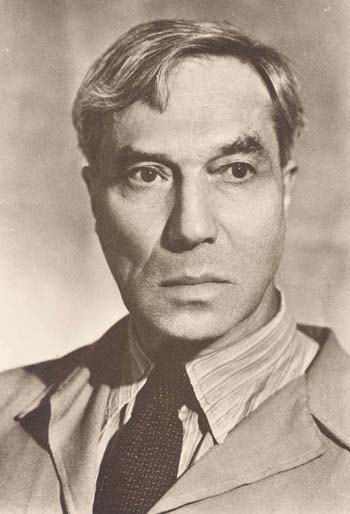 Boris Leonidovich Pasternak ( _ru. Бори́с Леони́дович Пастерна́к) (OldStyleDate|February 10|1890|January 29 — , ) was a -winning n and . In the West he is best known for the epic novel "Doctor Zhivago", a tragedy, whose events span through the last period of Tsarist Russia and early days of . It was first translated and published in Italy in 1957. In Russia, however, Boris Pasternak is most celebrated as a poet. "My Sister Life", written in 1917, is arguably the most influential collection of poetry published in in the 20th century.

Pasternak was born in on , (Gregorian), 1890 (Julian January 29). His father was a prominent painter, , professor at the and his mother was Rosa (Raitza) Kaufman, a concert pianist. Pasternak was brought up in a highly cosmopolitan atmosphere, and visitors to his home included pianist and composer , poet , and writer .

Inspired by his neighbour , Pasternak resolved to become a composer and entered the . In 1910 he abruptly left the conservatory for the , where he studied under philosophers and . Although invited to become a scholar, he decided against making philosophy a profession and returned to Moscow in 1914. His first poetry collection, influenced by and the , was published later the same year.

During the , he taught and worked at a chemical factory in , which undoubtedly provided him with material for "Dr. Zhivago" many years later. Unlike many of his relatives and friends, Pasternak did not leave Russia after the revolution. Instead, he was fascinated with the new ideas and possibilities that revolution brought to life.

Pasternak spent the summer of 1917 living in the steppe country near , where he fell in love. This passion resulted in the collection "My Sister Life", which he wrote over a period of three months, but was too embarrassed to publish for four years because of its novel style. When it finally was published in 1921, the book revolutionised Russian poetry. It made Pasternak the model for younger poets, and decisively changed the poetry of , and others.

Following "My Sister Life", Pasternak produced some hermetic pieces of uneven quality, including his masterpiece - the lyric cycle entitled "Rupture" (1921). Authors such as , , and Vladimir Nabokov applauded Pasternak's poems as works of pure, unbridled inspiration. In the late 1920s, he also participated in the much celebrated tripartite correspondence with and . [citation|last=Bayley|first=John|title=Big Three|url=http://www.nybooks.com/articles/5268|journal=| volume= 32|date= , |accessdate=2007-09-28]

By the end of the 1920s, Pasternak increasingly felt that his colourful modernist style was at odds with the doctrine of approved by the Communist party. He attempted to make his poetry more comprehensible to the masses by reworking his earlier pieces and starting two lengthy poems on the Russian Revolution. He also turned to prose and wrote several autobiographical stories, notably "The Childhood of Lovers" and "Safe Conduct".

By 1932, Pasternak had strikingly reshaped his style to make it acceptable to the Soviet public and printed the new collection of poems aptly entitled "The Second Birth". Although its Caucasian pieces were as brilliant as the earlier efforts, the book alienated the core of Pasternak's refined audience abroad. He simplified his style even further for his next collection of patriotic verse, "Early Trains" (1943), which prompted Nabokov to describe Pasternak as a "weeping Bolshevik" and " in trousers."

During the great purges of the later 1930s, Pasternak became progressively disillusioned with Communist ideals. Reluctant to publish his own poetry, he turned to translating ("", "", ""), (""), ("Requiem für eine Freundin"), , and Georgian poets. Pasternak's translations of Shakespeare have proved popular with the Russian public because of their colloquial, modernised dialogues, but critics accused him of "pasternakizing" the English playwright. Although he was widely panned for excessive subjectivism, is said to have crossed Pasternak's name off an arrest list during the purges, saying "Don't touch this cloud dweller."Fact|date=June 2007Another version of Stalin's remark, possibly on a separate occasion, is "Leave that Holy Fool alone!"

His cousin, Polish poet , was not so lucky. As a result of his political activities in Poland — writing satirical verses for socialist revolutionary periodicals - he was imprisoned in 1934 in the .

Several years before the start of the Second World War, Pasternak and his wife settled in , a village for writers several miles from . He was filled with a love of life that gave his poetry a hopeful tone. This is reflected in the name of his autobiographical hero Zhivago, derived from the Russian word for "live". Another famous character, Lara, is said to have been modeled on his mistress, Olga Ivinskaya. [cite news|title=Today in Literary History|url=http://archive.salon.com/books/today/2002/05/30/may30/index.html|work=|date= , |accessdate=2007-09-28]

As the book was frowned upon by the Soviet authorities, "Doctor Zhivago" was smuggled abroad by his friend and published in an Italian translation by the Italian publishing house in 1957. The novel became an instant sensation, and was subsequently translated and published in many non-Soviet bloc countries. In 1958 and 1959, the American edition spent 26 weeks at the top of ""' bestseller list. Although none of his Soviet critics had the chance to read the proscribed novel, some of them publicly demanded, "kick the pig out of our kitchen-garden," i.e., expel Pasternak from the USSR. This led to a jocular Russian saying used to poke fun at illiterate criticism, "I did not read Pasternak, but I condemn him". "Doctor Zhivago" was eventually published in the USSR in 1988. [ [http://magazines.russ.ru/novyi_mi/soder/80-89.html Contents] of magazines ru icon]

The screen adaptation, directed by , was of epic proportions, being toured in the tradition, and starred and . Concentrating on the romantic aspects of the tale, it quickly became a worldwide blockbuster, but wasn't released in Russia until near the time of the fall of the Soviet Union.

Pasternak was named the winner of the in 1958. On , two days after hearing that he had won, Pasternak sent the following telegram to the :

Considering the meaning this award has been given in the society to which I belong, I must refuse it. Please do not take offense at my voluntary rejection.

This refusal, of course, in no way alters the validity of the award. There remains only for the Academy, however, to announce with regret that the presentation of the Prize cannot take place.

Reading between the lines of Pasternak's second telegram, it is clear he declined the award out of fear that he would be stripped of his citizenship were he to travel to to accept it. After struggling a lifetime to avoid leaving Russia, this was not a prospect he welcomed.

Despite turning down the Nobel Prize, Soviet officials soured on Pasternak, and he was threatened at the very least with expulsion. However, it appears that the Prime Minister of India, Pandit Nehru, may also have spoken with Khrushchev about this.

Despite this, a famous cartoon at the time showed Pasternak and another prisoner in Siberia, splitting trees in the snow. In the caption, Pasternak says, "I won the Nobel Prize for literature. What was your crime?" The cartoon won the in 1959. [ [http://www.loc.gov/rr/print/swann/mauldin/mauldin-intro.html Bill Mauldin Beyond Willie and Joe] (Library of Congress)]

The Nobel medal was finally presented to Pasternak's son, Yevgeny, at a ceremony in Stockholm during the Nobel week of December 1989. [ [http://english.pravda.ru/science/19/95/380/11588_Pasternak.html Boris Pasternak: The Nobel Prize. Son's memoirs.] (Pravda, December 18, 2003)] At the ceremony, the Russian cellist played a Bach serenade to honor his deceased countryman.

Pasternak died of on , .Despite only a small notice appearing in the "Literary Gazette", thousands of people traveled from Moscow to his funeral in Peredelkino. "Volunteers carried his open coffin to his burial place and those who were present (including the poet ) recited from memory the banned poem 'Hamlet'."

Musical Artist recites a verse from a poem written in 1912 by Pasternak in her song "Apres Moi" from her album "Begin to Hope".
Pasternak is the Russian word for parsnip.