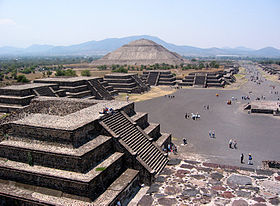 Many pre-Columbian civilizations established characteristics such as permanent or urban settlements, agriculture, and complex societal hierarchies. 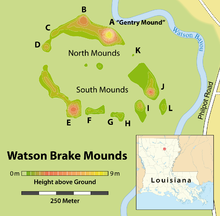 In North America, indigenous cultures in the Lower Mississippi Valley during the Middle Archaic period built complexes of multiple mounds, with several in Louisiana dated to 5600-5000 BP (3700 BCE-3100 BCE). Watson Brake is considered the oldest, multiple mound complex in the Americas, as it has been dated to 3500 BCE. It and other Middle Archaic sites were built by pre-ceramic, hunter-gatherer societies. They preceded the better known Poverty Point culture and its elaborate complex by nearly 2,000 years.[1] The Mississippi Valley mound-building tradition extended into the Late Archaic period, longer than later southeastern mound building dependent on sedentary, agricultural societies.(Russo, 1996:285)[1]

Some of these civilizations had long ceased to function by the time of the first permanent European arrivals (ca. late 15th – early 16th centuries), and are known only through archaeological investigations or oral history from tribes today. Others were contemporary with this period, and are also known from historical accounts of the time. A few, such as the Olmec, Maya, Mixtec, and Nahua had their own written records. However, most Europeans of the time viewed such texts as heretical and burned most of them. Only a few hidden documents remain today, leaving modern historians with glimpses of ancient culture and knowledge.

From both indigenous American and European accounts and documents, American civilizations at the time of European encounter possessed many impressive attributes, having the most populous city in the world, and having developed modern theories of astronomy and mathematics.

Where they persist, the societies and cultures which gave rise to these civilizations continue to adapt and evolve; they also uphold various traditions and practices which relate back to these earlier times, even if combined with those more recently adopted. 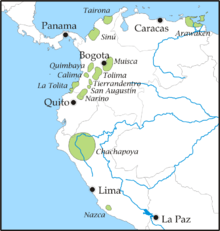