Mesoamerica, like India, Mesopotamia, China, and Egypt, is one of the few places in the world where writing has developed independently. Mesoamerican scripts deciphered to date are logosyllabic, combining the use of logograms with a syllabary, and they are often called hieroglyphic scripts. Five or six different scripts have been documented in Mesoamerica but archaeological dating methods make it difficult to establish which was earliest and hence the forebear from which the others developed. The best documented and deciphered Mesoamerican writing system, and hence the most widely known, is the classic Maya script. An extensive Mesoamerican literature has been conserved partly in indigenous scripts and partly in the postconquest transcriptions in the Latin script. 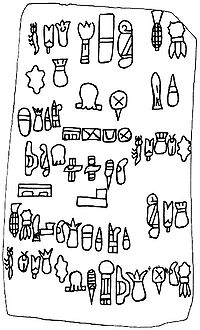 Early Olmec ceramics show representations of something that may be codices, suggesting that amatl bark codices, and by extension well-developed writing, existed in Olmec times.[citation needed] It was also long thought that many of the glyphs present on Olmec monumental sculpture, such as those on the so-called "Ambassador Monument" (La Venta Monument 13), represented an early Olmec script. This suspicion was reinforced in 2002 by the announcement of the discovery of similar glyphs at San Andres.

In September 2006, a report published in Science magazine announced the discovery of the Cascajal block, a writing tablet-size block of serpentine with 62 characters unlike any yet seen in Mesoamerica. This block was discovered by locals in the Olmec heartland and was dated by the archaeologists to approximately 900 BCE based on other debris. If the authenticity and date can be verified, this will prove to be the earliest writing yet found in Mesoamerica. 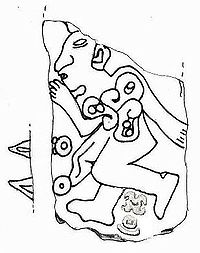 Monument 3 at San Jose Mogote. The two shaded glyphs between his legs are likely his name, Earthquake 1

Another candidate for earliest writing system in Mesoamerica is the writing system of the Zapotec culture. Rising in the late Pre-Classic era after the decline of the Olmec civilization, the Zapotecs of present day Oaxaca built an empire around Monte Alban. On a few monuments at this archaeological site, archaeologists have found extended text in a glyphic script. Some signs can be recognized as calendric information but the script as such remains undeciphered. Read in columns from top to bottom, its execution is somewhat cruder than that of the later Classic Maya and this has led epigraphers to believe that the script was also less phonetic than the largely syllabic Mayan script. These are, however, speculations.

The earliest known monument with Zapotec writing is a "Danzante" stone, officially known as Monument 3, found in San Jose Mogote, Oaxaca. It has a relief of what appears to be dead and bloodied captive with two glyphic signs between his legs, probably his name. First dated to 500–600 BCE, this was earlier considered the earliest writing in Mesoamerica. However doubts have been expressed as to this dating and the monument may have been reused. The Zapotec script went out of use only in the late Classic period. 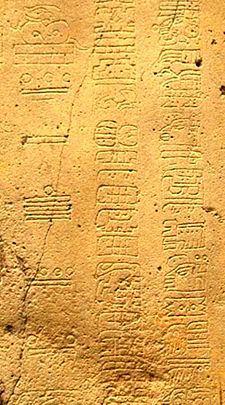 Detail showing three columns of glyphs from 2nd century CE La Mojarra Stela 1 currently located at the Museum of Anthropology of Xalapa, Veracruz, Mexico. The two right columns are glyphs from the Epi-Olmec script. The left column gives a Long Count date of 8.5.16.9.9, or 162 CE.

A small number of artefacts found in the Isthmus of Tehuantepec show examples of another early Mesoamerican writing system. They can be seen to contain calendric information but are otherwise undeciphered. The longest of these texts are on La Mojarra Stela 1 and the Tuxtla Statuette. The writing system used is very close to the Mayan script, using affixal glyphs and Long Count dates, but is read only in one column at a time as is the Zapotec script. It has been suggested that this Isthmian or Epi-Olmec script is the direct predecessor of the Mayan script, thus giving the Mayan script a non-Mayan origin. Another artefact with Epi-Olmec script is the Chiapa de Corzo stela which is the oldest monument of the Americas inscribed with its own date: the Long Count on the stela dates it to 36 BCE.

In a 1997 paper, John Justeson and Terrence Kaufman put forward a decipherment of Epi-Olmec and leading, in 2003, to a Guggenheim Fellowship for this work. The following year, however, their interpretation was disputed by Stephen Houston and Michael D. Coe, who unsuccessfully applied Justeson and Kaufman's decipherment system against epi-Olmec script from the back of a hitherto unknown mask. The matter remains under dispute.

In the highland Mayan archaeological sites of Abaj Takalik and Kaminaljuyú writing has been found dating to Izapan culture. It is likely that in this area in late Pre-Classic times an ancient form of a Mixe–Zoquean language was spoken, and the inscriptions found here may be in such a language rather than a Mayan one. Some glyphs in this scripts are readable as they are identical to Mayan glyphs but the script remains undeciphered. The advanced decay and destruction of these archaeological sites make it improbable that more monuments with these scripts will come to light making possible a decipherment. 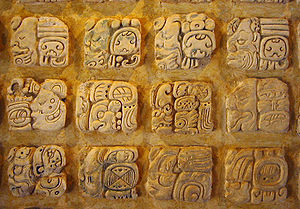 Maya glyphs in stucco at the Museo de sitio in Palenque, Mexico

Mayan writing is attested from the mid-preclassic period in the center of Petén in the Mayan lowlands, and lately scholars have suggested that the earliest Mayan inscriptions may in fact be the oldest of Mesoamerica. The earliest inscriptions in an identifiably Maya script date back to 200–300 BCE. Early examples include the painted inscriptions at the caves of Naj Tunich and La Cobanerita in El Petén, Guatemala. And the most elaborate inscriptions are considered to be those at classic sites like Palenque, Copán and Tikal.

The Maya script is generally considered to be the most fully developed Mesoamerican writing system mostly because of its extraordinary aesthetics and because it has been deciphered. In Mayan writing, logograms and syllable signs are combined. Around 700 different glyphs have been documented, with some 75% having been deciphered. Around 7000 texts in Mayan script have been documented. 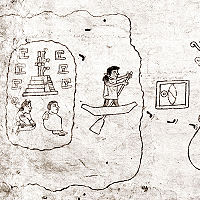 Detail of first page from the Aztec Boturini Codex showing the use of semasiological writing combined with phonetic glyph elements.

After the collapse of the Classic Maya civilization, the Mayan glyphic system continued to be used but much less so. Post-Classic inscriptions are found at the Yucatán peninsula in sites such as Chichén Itza and Uxmal but the style is not nearly as accomplished as the Classic Mayan inscriptions. Other Post-Classic cultures such as the Aztec did not have developed writing systems at all, but instead used semasiographic writing although they have been said to be slowly developing phonetic principles in their writing by the use of the rebus principle. Aztec name glyphs for example do combine logographic elements with phonetic readings.