Castine is a town in Hancock County, Maine, United States and was once the capital of Acadia (1657–1667).[1] The population was 1,343 at the 2000 census. Castine is the home of Maine Maritime Academy, a four-year institution that graduates officers and engineers for the United States Merchant Marine and marine related industries. Approximately 850 students are enrolled. During the French colonial period, Castine was the southern tip of Acadia and briefly served as the capital of the region.[2] During much of the 17th century, Castine was the most southern settlement of Acadia. (Bristol, Maine was the most northern New England settlement.)[3][4] The town is named after Jean-Vincent d'Abbadie de Saint-Castin.

Called Majabigwaduce by Tarrantine Abenaki Indians, Castine is one of the oldest towns in New England, predating the Plymouth Colony by seven years. Situated on Penobscot Bay, it is near the site of Fort Pentagouet, which many[who?] consider to be the oldest permanent settlement in New England.[citation needed] Few places in New England have had a more tumultuous history than Castine—which proclaims itself the "battle line of four nations." [5]

Its commanding position at the mouth of the Penobscot River, a lucrative source of furs and timber, as well as a major transportation route into the interior, made the peninsula occupied by the present-day town of Castine of particular interest to European powers in the 17th-century. Majabagaduce (as the Indian name would be corrupted) changed hands numerous times with shifting imperial politics. At one time or another, it was occupied by the French, Dutch and England's Plymouth Colony.[6]

The Castine peninsula appears on a 1612 chart submitted to King Henry IV of France by Samuel de Champlain, who called it the Pentagoët Peninsula. As part of Henry's program to defend Acadia, Castine was founded in the winter of 1613, when Claude de Saint-Etienne de la Tour established a small trading post to conduct business with the Tarrantine Indians (now called the Penobscots).[7]

After the trading post was established at Castine, a raid by English captain Samuel Argall at Mount Desert Island in 1613 signaled the start of a long-running dispute over the boundary between French Acadia to the north and the English colonies to the south. There is evidence that de La Tour immediately challenged the English action by re-establishing his trading post in the wake of Argall's raid.[8] Captain John Smith charted the area in 1614 and referred to French traders in the vicinity. In 1625, Charles de Saint-Étienne de la Tour erected a fort named Fort Pentagouet.[9] English colonists from the Plymouth Colony seized it in 1628, and made it an administrative outpost of their colony. Colonial Governor William Bradford personally traveled there to claim it.

In 1635, it was retaken by the French and again incorporated into Acadia; Governor Isaac de Razilly sent Charles de Menou d'Aulnay de Charnisay to retake the village.[10] In 1638, d'Aulnay built a more substantial fort named Fort St. Pierre.[11] Emmanuel Le Borgne with 100 men raided the settlement in 1653.[12] Major General Robert Sedgwick led 100 New England volunteers and 200 of Oliver Cromwell's soldiers on an expedition against Acadia in 1654. Before taking its capital Port Royal, Sedgwick captured and plundered the French settlement at Pentagouet.[13] The English occupied Acadia for the next 16 years.[14]

In 1667, after the Treaty of Breda brought peace, French authorities dispatched the Baron Jean-Vincent de St. Castin to take command of Pentagouet. The baron married an Abenaki woman, the daughter of the sachem Modockawando. She adopted the French name Mathilde and bore him 10 children.[15] Castine soon became a force in colonial trade and diplomacy. 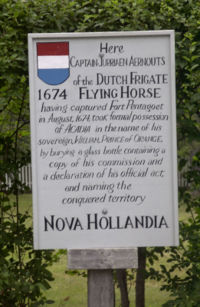 In 1674, Pentagouet and other Acadian ports were captured by the Dutch privateer Jurriaen Aernoutsz, beginning the Dutch Occupation of Acadia. The Dutch turned the fort's cannon on its own walls and destroyed most of it after the second siege. Castin himself retook it in 1676 and renamed the town Bagaduce, a shortened version of Majabagaduce. Castin's settlement was plundered by English Governor Sir Edmund Andros in 1688. In response, Castin led an Abenaki war party to raid the English settlement at Pemaquid (present-day Bristol, Maine) in August 1689.[16] In 1692 the village was again seized by the English, when Major Benjamin Church destroyed the fort and looted the settlement. With the return of Baron Castin and his sons to France, the settlement became sparsely occupied.

At the end of the French and Indian War, which secured English title to North America, the unoccupied lands along the Maine coast were opened to settlement by Massachusetts colonists. By the late 1760s, farmers, artisans, and small traders were beginning to take title to properties in and around "Major Baggadoose." Though the fur trade was long dead, the region's abundant fisheries and timber attracted not only entrepreneurs, but also the attention of the British government, which was always on the lookout for store to supply its growing navy. Bagaduce was especially valuable for supplying timber suitable for masts on British warships.[7]

In early July of 1779, nearly three years after the American Patriots had declared independence from Britain, a British naval and military force under the command of General Francis McLean sailed into Castine's commodious harbor, landed troops, and took control of the village. They began erecting Fort George on one of the highest points of the peninsula. Alarmed by this incursion, the Massachusetts legislature dispatched what became known as the Penobscot Expedition. The military expedition consisted of a fleet of 19 armed vessels and 24 transports, carrying 344 guns, under Dudley Saltonstall, and a land force of about 1,200 men, under Gen. Solomon Lovell, seconded by Gen. Peleg Wadsworth. Col. Paul Revere was given charge of the ordnance.

Although badly outnumbered, British soldiers of the 74th Regiment of Foot (Argyle Highlanders), managed to repel American attacks for nearly three weeks. In mid-August, British reinforcements appeared at the head of the bay. The Americans eventually abandoned the fight and retreated up the Penobscot River, destroying their entire fleet along the way to keep it out of British hands. The failed Penobscot Expedition, which cost the revolutionaries eight million dollars, proved to be the greatest American naval defeat until Pearl Harbor in 1941. The 74th Regiment held Majabagaduce until the end of the war, when it was ceded to the Americans as part of the peace settlement. Saltonstall and Revere were later court-martialed, charged with cowardice and insubordination; the boards found Saltonsall guilty, but acquitted Revere.

At the end of the Revolutionary War, many American Loyalists in the area migrated eastward to the Canadian Maritimes, some towing their houses behind their boats. Subsequently known as United Empire Loyalists, they crossed the newly established international boundary line of the St. Croix River and established St. Andrews, one of the oldest towns in New Brunswick. In addition, many soldiers of the 74th chose to be disbanded in St. Andrews (last muster May 24, 1784), and took up land grants there along with the Loyalists, rather than return to Britain.[7]

In 1762, the Provincial General Court granted the land designated as Township Number Three, commonly known as Majorbigwaduce or Majabigwaduce, to a group of proprietors. After some disputes concerning the proprietors' claims to the land, the General Court of Massachusetts recognized Township No. 3 and incorporated it as the Town of Penobscot in 1787. Penobscot then included what are now the towns of Castine, Penobscot, and Brooksville. On February 10, 1796, the Commonwealth of Massachusetts passed an act which separated Penobscot into the towns of Castine and Penobscot. Castine held its first town meeting on April 4, 1796.[18]

Since 1814, the United States's oldest post office in continuous operation

During the War of 1812, from his base in Halifax, Nova Scotia, in August and September 1814, Sir John Coape Sherbrooke sent a naval force and 500 British troops in another "Penobscot Expedition". In 26 days, they suceeded in taking possession of Hampden, Bangor, and Machias, destroying or capturing 17 American ships. They won the Battle of Hampden (losing two killed while the Americans lost one killed) and occupied the village of Castine for the rest of the war. The Treaty of Ghent returned this territory to the United States. The British left in April 1815, at which time they took 10,750 pounds obtained from tariff duties at Castine. This money, called the "Castine Fund", was used in the establishment of Dalhousie University, in Halifax, Nova Scotia.[19]

With the growth of the postwar economy, the town became a prosperous place: the seat of Hancock County and a center for shipbuilding and coastal trading. By the 1820s, it had become a major entrepot for American fishing fleets on their way to the Grand Banks. It also prospered from the lumber industry, in which eastern Maine dominated the rest of the country before the Civil War. During this period of growth and prosperity, many of the handsome Federal and Greek Revival style mansions that still grace the village's streets were constructed. 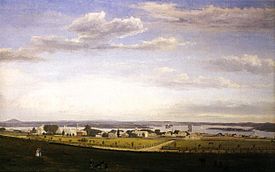 But Castine declined after the Civil War. Its fleet, which once sailed the globe, now carried coal, firewood, and lime to coastal ports, competing with railroads and steamships. Ambitious young people sought their fortunes elsewhere. The Hancock County seat moved to Ellsworth in 1838.[7]

By the 1870s, however, Castine's quaint old architecture and cool summer air attracted "rusticators" -- well-to-do urban families seeking rest and recreation. Its charms also drew cultural luminaries, including Harriet Beecher Stowe and Henry Wadsworth Longfellow, whose writings romanticized its past. By the 1890s, wealthy families from Boston, Hartford and Chicago were buying up old farms and sea captains' houses. Hotels and inns opened as Castine became a flourishing summer colony. Since 1867, it had been site of the Eastern State Normal School.[6]

But in the 1930s, Castine reached its economic nadir. The Great Depression and the automobile had killed off the hotel trade, the steamship lines that had linked coastal towns and islands, and the local fishing industry. Its fortunes did not revive until the 1960s, with the rediscovery of the town's charms by a new generation of summer people.[5]

Main Street towards the Town Dock

A key element in the town's revival has been the expansion of the Maine Maritime Academy. Established in 1941 to train merchant seamen, by the 1980s the Academy offered a range of courses in engineering, management, transportation, and nautical and ocean science. Its campus, once the home of the Eastern State Normal School, features a library (available to the public) and extensive athletic facilities.

By the 1980s, many of the old hotels previously in disuse had reopened. The harbor, almost entirely empty in the 1950s, filled with luxury yachts. Castine was discovered by wealthy retirees willing to brave the rigors of winter in Maine, prompting some cynics[who?] to dub the town: "New Canaan-by-the-Sea."

Castine has a number of historic sites and parks (including the ruins of British earthworks at Fort George), a deep water harbor (with tie-ups for small boats beyond the current of the Penobscot and Bagaduce rivers), a non-exclusive club offering golf, tennis and yachting facilities, restaurants, and four churches (Episcopal, Roman Catholic, Congregational and Unitarian Universalist). In addition, the town has a public library, an historical society, and the Wilson Museum, a institution featuring exhibits of anthropological, natural and local artifacts. Castine's streets are lined with Cape and other antique style houses, and shaded by large elms which are replaced with disease-resistant strains when they succumb. Opened in 1814, the Castine Post Office is the oldest in continuous operation in the United States.[5]

The town is crossed by state routes 166 and 166A. Situated on a peninsula in Penobscot Bay, Castine is bordered by the town of Penobscot to the northeast, Brooksville across the Bagaduce River to the southeast, and near Islesboro to the southwest.

Pentagoet, a tugboat of the Maine Maritime Academy

There were 372 households out of which 18.0% had children under the age of 18 living with them, 49.2% were married couples living together, 7.0% had a female householder with no husband present, and 40.3% were non-families. 30.1% of all households were made up of individuals and 12.4% had someone living alone who was 65 years of age or older. The average household size was 2.16 and the average family size was 2.69. 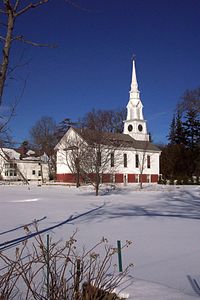 A view in Castine