The Migratory Bird Treaty Act of 1918 (MBTA), codified at 16 U.S.C. §§ 703–712 (although §709 is omitted), is a United States federal law, at first enacted in 1916 in order implement the convention for the protection of migratory birds between the United States and Great Britain (acting on behalf of Canada[1]). The statute makes it unlawful to pursue, hunt, take, capture, kill or sell birds listed therein ("migratory birds"). The statute does not discriminate between live or dead birds and also grants full protection to any bird parts including feathers, eggs and nests. Over 800 species are currently on the list.

Narrow exceptions to the act, known as the eagle feather law, are enacted in federal regulations (50 C.F.R. 22), which regulates the taking, possession, and transportation of bald eagles, golden eagles, and their "parts, nests, and eggs" for "scientific, educational, and depredation control purposes; for the religious purposes of American Indian tribes; and to protect other interests in a particular locality." Enrolled members of federally recognized tribes may apply for an eagle permit for use in "bona fide tribal religious ceremonies."[2]

The Act was enacted in an era when many bird species were threatened by the commercial trade in birds and bird feathers. The Act was one of the first federal environmental laws (the Lacey Act had been enacted in 1900). The Act replaced the earlier Weeks-McLean Act (1913). Since 1918, similar conventions between the United States and four other nations have been made and incorporated into the MBTA: Mexico (1936), Japan (1972) and the Soviet Union (1976, now its successor state Russia). Some of these conventions stipulate protections not only for the birds themselves, but also for habitats and environs necessary for the birds' survival.

Louis Marshall had a key influence as an intervenor on a landmark case before the Supreme Court underscoring the right and responsibility of the Federal government for environmental protection and conservation. In a friend of the court brief in Missouri v. Holland on behalf of the Association for the Protection of the Adirondacks, Marshall successfully persuaded the Court to uphold the Migratory Bird Treaty Act of 1918, between the United States and Canada.[3] As characterized by Adler, Marshall argued that "the United States did have the power to create such legislation; that Congress was well within its rights; and that the Act was constitutional"; and further that, "If Congress possessed plenary powers to legislate for the protection of the public domain, then it had to take into account all possibility for such protection", including protection of migratory birds, "these natural guardians" against "hostile insects, which, if not held in check ... would result in the inevitable destruction" of "both prairie and forest lands". According to Handlin, Marshall's intervention "was a major factor in the decision."[4]

In the 24 August 2006 edition of the Federal Register, the U.S. Department of the Interior's Fish and Wildlife Service proposed adding 152 species, removing 12 species, and correcting/updating the common or scientific names of numerous others. [1] Reasons for the proposed revisions include birds mistakenly omitted previously, new evidence on geographic distribution, taxonomic changes, etc. In addition the mute swan (Cygnus olor), which was afforded temporary protection due to court order since 2001, is formally excluded from protection in the proposal due to "nonnative and human introduced" status. The previous update to the list occurred on 5 April 1985.

On January 9, 2001 the US Supreme Court, in a split vote of 5 to 4, (Solid Waste Agency, of Skokie, Illinois vs US Army Corps of Engineers) threw out what has been dubbed the Migratory bird rule[5] A case that pitted a consortium of towns around Chicago over isolated wetlands, inhabited or visited by over 100 migratory bird species, against the US Army Corps of Engineers. In this case, Skokie, Ill. wanted abandoned quarries filled with water, but not connected to another or navigable body of water to serve as a site for a solid waste facility. For the previous 15 years lower courts had sustained the law in favor of migratory birds, siding with the Army Corps.[6]

At least one state reacted to the new Supreme court ruling by restoring isolated wetlands protection: 2001 Wisconsin Act 6, is the first of its kind nationwide to restore wetlands regulation to the state after federal authority had been revoked. It restores protection to over one million acres (4,000 km²) of isolated wetlands in Wisconsin. On May 7, 2001, Wisconsin Governor Scott McCallum signed a bill protecting wetlands by placing Wisconsin wetlands regulation under the jurisdiction of the Wisconsin Department of Natural Resources. Bipartisan state legislators fully supported the bill and felt it was necessary after the Supreme Court ruled that the federal clean water act didn't give the Corps authority over decisions involving isolated wetlands.[7]

Migratory birds may seek respite within trees or on buildings considered private property. The Migratory Bird Treaty Act of 1918 prohibits the removal of all listed species or their parts (feathers, eggs, nests, etc.) from such property. However, in extreme circumstances, a federal permit might be obtained for the relocation of listed species (in some states a state permit is required in addition to a federal permit). Pursuant to the spirit of the treaty, it is not trivial to obtain a permit; the applicant must meet a certain criteria as outlined in Title 50, Code of Federal Regulations, 21.27, Special Purpose Permits.[8]

The permit applicant is generally a contractor who specializes in wildlife relocation. When hiring a contractor to trap and relocate any animal from one's property, the private property owner is well advised to attain proof of such permits before any trapping activity begins, as trapping without the necessary paperwork is common in the United States.

Most wildlife management professionals consider relocation actions undue harm to the birds, particularly since relocated birds (being migratory) often return to the same property the next year. In the case of trapping and relocation, harm is brought on by or can result in: 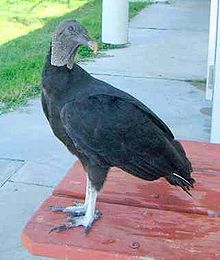 American Black Vulture Coragyps atratus, one of the species covered under the treaty.

The following is a sampling of some of the more commonly known birds of the over 800 species covered under the treaty:

The migratory bird conventions with Canada and Mexico define "game birds" as those species belonging to the following families:

The Migratory Bird Treaty Act, which implements the conventions, grants the Secretary of the Interior the authority to establish hunting seasons for any of the migratory game bird species listed below. In actuality, the Fish and Wildlife Service has determined that hunting is appropriate only for those species for which there is a long tradition of hunting, and for which hunting is consistent with their population status and their long-term conservation. It is inconceivable, for example, that we will ever see legalized hunting of plovers, curlews, or the many other species of shorebirds whose populations were devastated by market gunners in the last decades of the 19th century.

Although the Migratory Bird Treaty Act considers some 170 species to be "game birds," less than 60 species are typically hunted each year. The Fish and Wildlife Service publishes migratory game bird regulations in the Federal Register. Those species for which hunting regulations have been established at some point during the past 10 years are designated with an asterisk (*) in the following list. However, such a designation does not necessarily indicate that a given species can be taken legally in your State or locality. For regulations specific to your locality, you should consult with your State's natural resource agency. Source: The list of hunted species was taken primarily from Appendix 2 of the Final Supplemental Environmental Impact Statement: Issuance of Annual Regulations Permitting the Sport Hunting of Migratory Birds (SEIS 88), U.S. Fish and Wildlife Service

Unlike the Endangered Species Act the MBTA is relatively unknown to the general public and causes little controversy. To date, there have been no serious attempts to have species stripped from the treaty.

One issue involves a small uninhabited island in the Pacific Ocean known as Farallon de Medinilla located 150 miles (240 km) north of Guam. The target range there is the United States Pacific Fleet’s only U.S.-controlled range available, and conveniently accessible from bases in Guam, for live-fire training. In addition, the air and sea space in the Farallon de Medinilla area provides sufficient room for the many different attack profiles which need to be rehearsed. During the peak of Vietnam War operations, ordnance delivered on the island was estimated at 22 tons per month, but is considerably less now.

The Navy has far more mitigation procedures to prevent environmental damage in the present day than they did in the 1960s. In compliance with the National Environmental Policy Act of 1969 they prepared an Environmental Impact Statement.[9] However, the Navy could not guarantee that no bird protected by the MBTA would be killed, despite the precautions. The Fish and Wildlife Service could not grant a permit without such a guarantee, and no permit has been issued. The Navy argued that it had done its best to comply with environmental laws, and should be permitted to operate under the Impact Statement prepared for NEPA. Vice Speaker Joseph P. DeLeon Guerrero, R-Saipan, noted that the U.S. military “is thorough and meticulous in monitoring the impact of the bombing [drills]” on Farallon de Medinilla.

Earthjustice sued for a temporary restraining order of tests because the navy did not comply with the MBTA, although they did comply with the other environmental laws. As a result a law was introduced by congress (H.R. 4546) to amend the Migratory Bird Treaty Act of 1918 to make it lawful for the Department of Defense to "take" (kill) migratory birds during a "military readiness activity". (Readiness activities are defined as all training activities and military operations related to combat and the testing of equipment for combat use.) The record in congress noted that "A recent federal court ruling indicated that the Navy had violated the Migratory Bird Treaty Act by incidentally taking migratory birds without a permit during training exercises near Guam. The House report indicates that the exemption provision is intended to address the lack of permit authorization for incidental takings, so that essential training exercises may proceed. It appears that the language used in the bill would not authorize the issuance of permits, but more broadly would state that the part of the Migratory Bird Treaty Act that articulates unlawful behavior does not apply to a military readiness activity.[10]