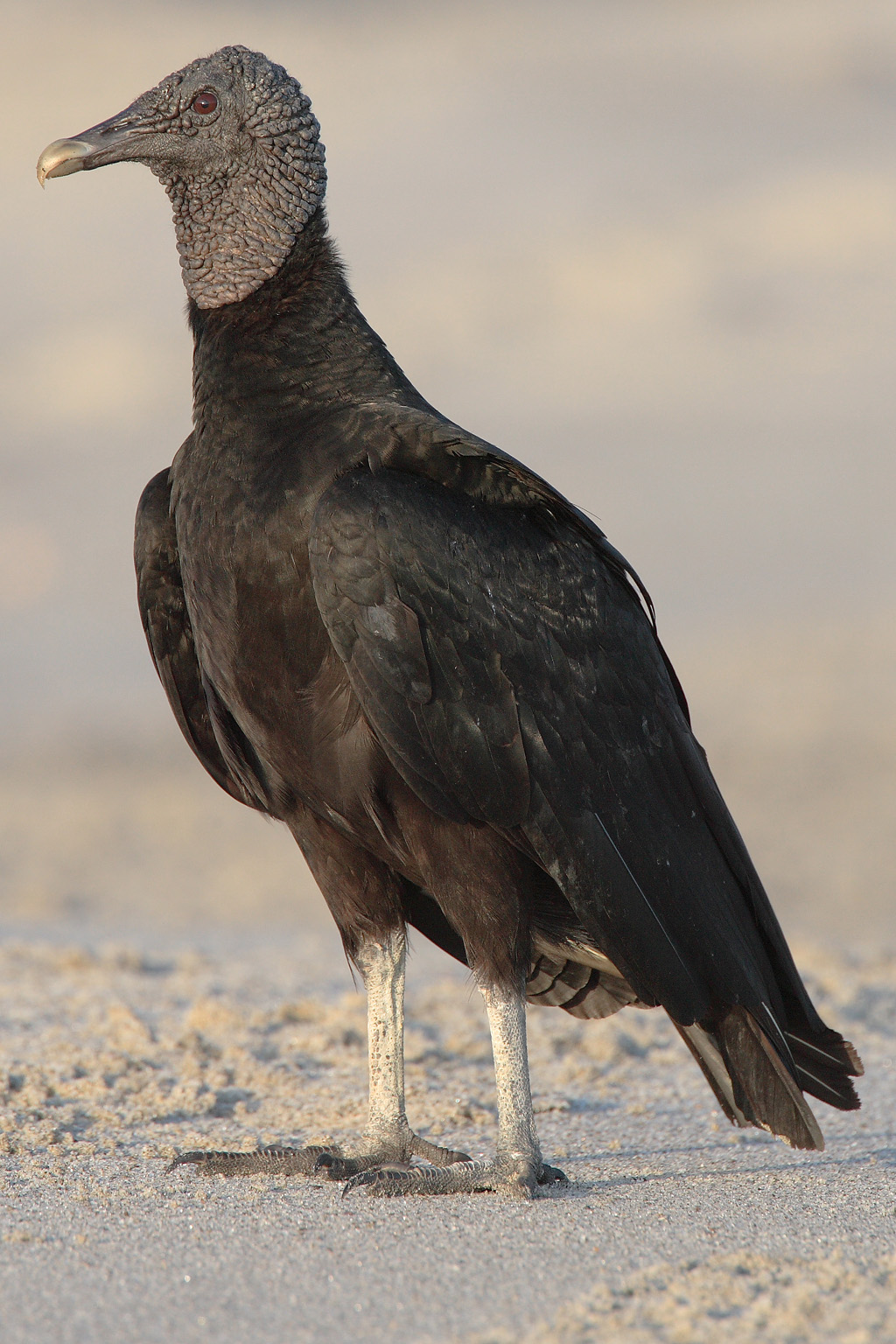 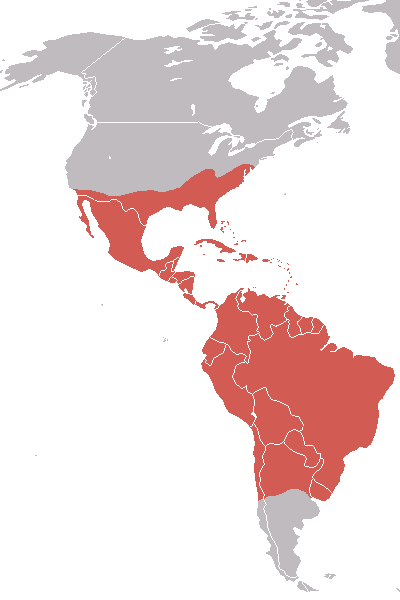 The American Black Vulture, "Coragyps atratus", also known as the Black Vulture, is a in the family whose range extends from the southeastern to . Although a common and widespread species, it has a somewhat more restricted distribution than its compatriot, the , which breeds well into and south to . Despite the similar name and appearance, this species is unrelated to the . The latter species is an in the family (which includes s, s, kites and harriers), whereas the American species is a New World vulture. It is the only extant member of the genus "Coragyps", which is in the family . It inhabits relatively open areas which provide scattered forests or shrublands. With a of 1.5 m (5 ft) the American Black Vulture is a large bird though relatively small for a vulture. It has black , a featherless, grayish-black head and neck, and a short, hooked .

The American Black Vulture is a and feeds on , but will also eat eggs or kill newborn animals. In areas populated by humans, it also feeds at garbage dumps. It finds its meals either by using its keen eyesight or by following other (New World) vultures, which possess a keen sense of smell. Lacking a syrinx&mdash;the vocal organ of birds&mdash;its only vocalizations are grunts or low hisses. It lays its eggs in caves or hollow trees or on the bare ground, and generally raises two chicks each year, which it feeds by regurgitation. In the United States, the vulture receives legal protection under the . This vulture also appeared in .

The "vulture" is derived from the word "vulturus", which means "tearer" and is a reference to its feeding habits.

The exact placement of the American Black Vulture and the remaining six species of s remains unclear. Though both are similar in appearance and have similar ecological roles, the New World and s evolved from different ancestors in different parts of the world. Just how different the two are is currently under debate, with some earlier authorities suggesting that the New World vultures are more closely related to s. [Sibley, Charles G. and Burt L. Monroe. 1990. " [http://books.google.com/books?vid=ISBN0300049692 Distribution and Taxonomy of the Birds of the World] ". Yale University Press. ISBN 0-300-04969-2. Accessed 2007-04-11.] More recent authorities maintain their overall position in the order along with the Old World vultures, [Sibley, Charles G., and Jon E. Ahlquist. 1991. " [http://books.google.com/books?vid=ISBN0300040857 Phylogeny and Classification of Birds: A Study in Molecular Evolution] ". Yale University Press. ISBN 0-300-04085-7. Accessed 2007-04-11.] or place them in their own order, Cathartiformes. [Ericson, Per G. P.; Anderson, Cajsa L.; Britton, Tom; Elżanowski, Andrzej; Johansson, Ulf S.; Kallersjö, Mari; Ohlson, Jan I.; Parsons, Thomas J.; Zuccon, Dario & Mayr, Gerald (2006): Diversification of Neoaves: integration of molecular sequence data and fossils. "" online: 1-5. DOI|10.1098/rsbl.2006.0523 [http://www.systbot.uu.se/staff/c_anderson/pdf/neoaves.pdf PDF preprint] [http://royalsociety.metapress.com/media/public/contributionsupplementalmaterials/0/5/8/3/058352377848735w/archive1.pdf Electronic Supplementary Material] (PDF)] The has removed the New World vultures from and instead placed them in "", but notes that a move to Falconiformes or Cathartiformes is possible.

There are three subspecies of American Black Vulture:
*"C. a. atratus", named by the German ornithologist in 1793, is known as the North American Black Vulture. It is the nominate subspecies. It is approximately the same size as "C. a. foetens", but its plumage is not as dark. Its range stretches from northern through and the north to the .
* "C. a. brasiliensis", named by in 1850, is known as the Southern American Black Vulture. It is smaller than "C. a. atratus" and "C. a. foetens". The light markings on the undersides of the primaries are whiter and broader than those of the other subspecies, and the underwing coverts are lighter than those of "C. a. foetens". It is found in and northern . To the south, the range extends to the coastal regions of on the west and the lowlands of on the east. To the north, it stretches to in western Mexico and in eastern Mexico. It is not found in high-altitude regions.

Fossil (or subfossil) Black Vultures cannot necessarily be attributed to the Pleistocene or the recent species without further information: the same size variation found in the living bird was also present in its larger prehistoric relative. Thus, in 1968, Hildegarde Howard separated the Mexican birds as "Coragyps occidentalis mexicanus" as opposed to the birds from locations farther north (such as ) which constituted the "C. o. occidentalis". [cite journal
last =Howard
first =Hildegarde
title =Limb measurements of the extinct vulture, "Coragyps occidentalis"
journal =Papers of the Archaeological Society of New Mexico
volume =1
year =1968
pages =115–127] The southern birds were of the same size as present-day North American Black Vultures and can only be distinguished by their somewhat stouter and the flatter and wider bills, and even then only with any certainty if the location where the fossils were found is known. [cite journal
last =Arroyo-Cabrales
first =Joaquin
coauthors =Johnson, Eileen & Guzman
title = Catálogo de los ejemplares tipo procedentes de la Cueva de San Josecito, Nuevo León, México ("Catalogue of the type specimens from San Josecito Cave, Nuevo León, Mexico")
journal =Revista Mexicana de Ciencias Geológicas
volume =20
issue =1
pages =79–93
year =2003
url =http://satori.geociencias.unam.mx/20-1/(6)Arroyo.pdf
accessdate = 2007-11-03 ] As the Pleistocene and current American Black Vultures form an evolutionary continuum rather than splitting into two or more lineages, some include the Pleistocene in "C. atratus".

The American Black Vulture is a very large bird of prey, measuring 65 centimeters (25.5 in) in length, with a 1.5 meter (5 ft) wingspan and a weight of 2-2.75 kilograms (4.5-6 lb). Its plumage is mainly glossy black. The head and neck are featherless and the skin is dark gray and wrinkled. The iris of the eye is brown and has a single incomplete row of es on the upper lid and two rows on the lower lid.

The nostrils are not divided by a septum, but rather are perforate; from the side one can see through the beak. [cite book| last =Allaby| first =Michael|title =The Concise Oxford Dictionary of Zoology| publisher =Oxford University Press| year =1992| location =Oxford, UK| pages =348| isbn = ISBN 0192860933] The wings are broad but relatively short. The bases of the primary feathers are white, producing a white patch on the underside of the wing's edge, which is visible in flight. The tail is short and square, barely reaching past the edge of the folded wings.

A "Coragyps atratus brasiliensis" was observed in , in 2005. It had white plumage overall, with only the tarsus and tail as well as some undertail feathers being black. It was not an as its skin seemed to have had the normal, dark color and it was part of a flock of some twenty normally-plumaged individuals. [cite journal
last =Hosner
first =Peter A
coauthors =Lebbin, Daniel J
title =Observations of plumage pigment aberrations of birds in Ecuador, including Ramphastidae
journal =Boletín de la Sociedad Antioqueña de Ornitología
volume =16
issue =1
pages = 30–42
year =2006
url =http://www.sao.org.co/publicaciones/boletinsao/05Hosner&LebbinPlumage.pdf
accessdate = 2007-11-03 ]

The American Black Vulture has a and distribution. [cite book
last =Bull
first =John L
coauthors =Levine, Emanuel
title =Bull's Birds of New York State
publisher =Cornell University Press
year =1998
pages =138
url =http://books.google.com/books?id=usb1eHtag4QC&dq
isbn = 0801434041] Its range includes the , , and most of . It is usually a permanent resident throughout its range, although birds at the extreme north of its range may migrate short distances, and others across their range may undergo local movements in unfavourable conditions. [Buckley, N. J. (1999). Black Vulture ("Coragyps atratus"). In "The Birds of North America", No. 411 (A. Poole and F. Gill, eds.). The Birds of North America, Inc., Philadelphia, PA.] In South America, its range stretches to central and .

It soars high while searching for food, holding its wings horizontally when gliding. It flaps in short bursts which are followed by short periods of gliding.

Like the Turkey Vulture, this vulture is often seen standing in a spread-winged stance. The stance is believed to serve multiple functions: drying the wings, warming the body, and baking off bacteria. This same behavior is displayed by other s, s, and s.

The American Black Vulture also occasionally feeds on or . It is the only species of New World vulture which preys on . It occasionally harasses cows which are giving birth, but primarily preys on new-born calves. In its first few weeks, a calf will allow vultures to approach it. The vultures swarm the calf in a group, then peck at the calf's eyes, or at the nose or the tongue. The calf then goes into shock and is killed by the vultures. [cite web
last =Paulik
first =Laurie
title =Vultures and Livestock
publisher =AgNIC Wildlife Damage Management Web
date =2007-08-06
url =http://lib.colostate.edu/research/agnic/birds/vultures/vulturesandlivestock.html
accessdate = 2007-10-15 ]

The timing of American Black Vultures' breeding season varies with the latitude at which they live. In the United States, birds in begin breeding as early as January, for example, while those in generally do not start before March.

The American Black Vulture lays its eggs on the ground in a wooded area, a hollow log, or some other cavity, seldom more than 3 meters (10 ft) above the ground. While it generally does not use any nesting materials, it may decorate the area around the nest with bits of brightly-colored plastic, shards of glass, or metal items such as bottle caps. Clutch size is generally two eggs, though this can vary from one to three. The egg is oval and on average measures 7.56 by 5.09 centimeters (3 by 2 in). The smooth, gray-green, bluish, or white shell is variably blotched or spotted with lavender or pale brown around the larger end.

The American Black Vulture is considered a threat by cattle ranchers due to its predation on newborn cattle. [cite web
last =Milleson
first =Michael P.
coauthors =Stephanie P. Shwiff and Michael L. Avery
title =Vulture-Cattle Interactions – A Survey of Florida Ranchers
publisher =University of California, Davis
year =2006
url =http://www.aphis.usda.gov/ws/nwrc/is/06pubs/shwiff061.pdf
work =Proceedings, 22nd Vertebrate Pest Conference
accessdate = 2007-12-09 ] The droppings produced by American Black Vultures and other vultures can harm or kill trees and other vegetation. [cite web
last =Paulik
first =Laurie
title =Vultures
publisher =AgNIC Wildlife Damage Management Web
date =2007-08-06
url =http://lib.colostate.edu/research/agnic/birds/vultures/index.html
accessdate = 2007-10-15 ] The American Black Vulture can be held in captivity, though the Migratory Bird Treaty Act only allows this in the case of animals which are injured or unable to return to the wild. It receives special legal protections under the in the ,

The American Black Vulture appears in a variety of Maya hieroglyphics in . It is normally connected with either death or as a bird of prey. The vulture’s glyph is often shown attacking humans. This species lacks the religious connections that the has. While some of the glyphs clearly show the American Black Vulture’s open nostril and hooked beak, some are assumed to be this species because they are vulture-like but lack the King Vulture's knob and are painted black.