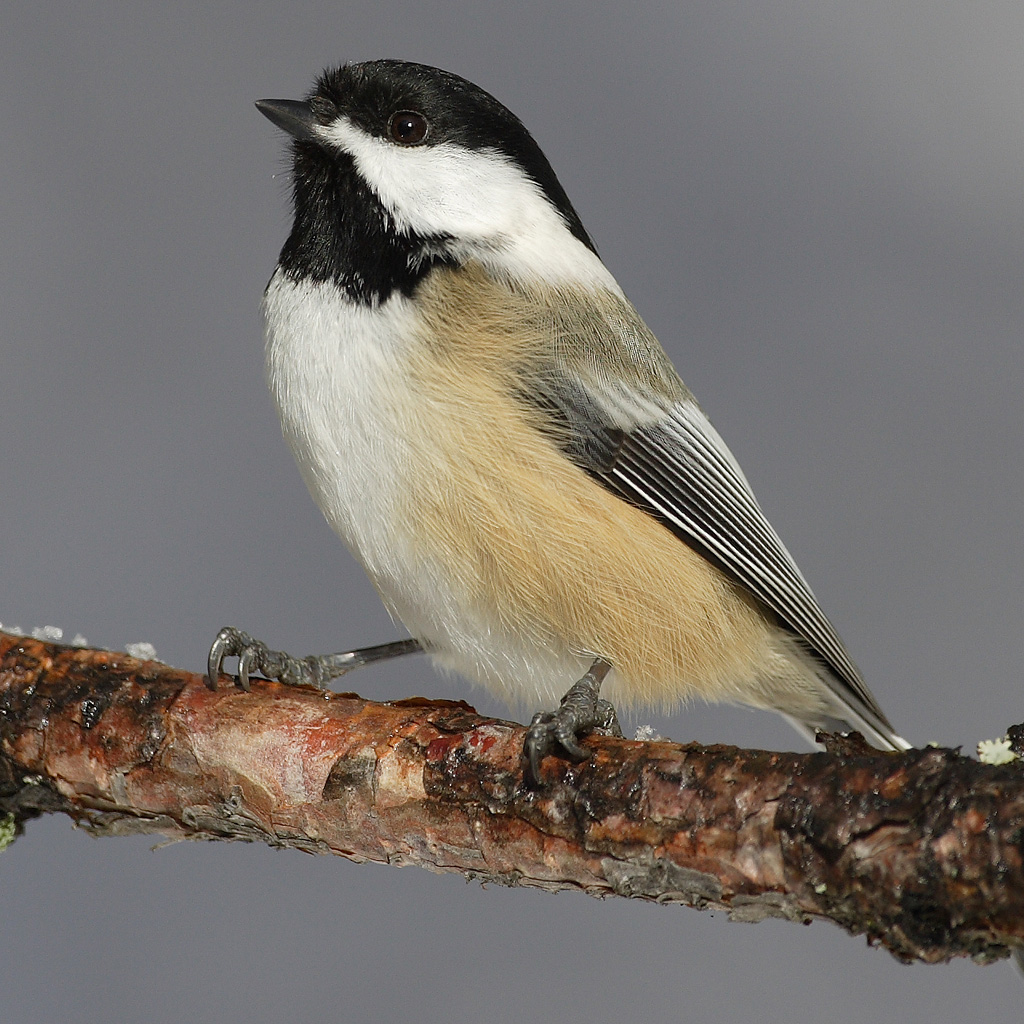 The Black-capped Chickadee ("Poecile atricapillus") is a small, common , a in the tit family Paridae.

Often, it is still placed in the genus "Parus" with most other tits, but cytochrome b sequence data and morphology suggest that separating "Poecile" more adequately expresses these birds' relationships (Gill et al., 2005). The has been treating "Poecile" as distinct genus for some time already.

The Black-capped Chickadee has a black cap and bib with white sides to the face. Its under parts are white with rusty brown on the flanks; its back is gray. It has a short dark bill, short wings and a long tail. The tail is normally primarily slate-gray but has been observed in central New Jersey in 2008 to be completely white and seemingly longer and more prominent than the normal gray tail. At least one other such white tail has been observed as a documented change occurring in one individual (banded) bird. [http://elibrary.unm.edu/sora/JFO/v004n03/p0160-p0161.pdf]

The breeding habitat of the Black-capped Chickadee is mixed or woods in , and the northern .The Black-capped and s are virtually impossible to tell apart visually, but they are readily distinguished by call. Their point of overlap is near New Brunswick, New Jersey.

They are permanent residents, but sometimes move south within their range in winter. On cold winter nights, these birds reduce their body temperature by up to 10-12 °C to conserve energy.

During the fall migration and winter, chickadees often together. Many other species of birds, including , , and warblers can often be found foraging in these flocks. Mixed flocks stay together because the chickadees call out whenever they find a good source of food. This calling out forms cohesion for the group, allowing the other birds to find food more efficiently. When flocking, Black-capped Chickadees soon establish a rigid social hierarchy.

In sparsely populated rural or forested areas, chickadees are often less wary than in urban settings. They may be observed exhibiting a sense of curiosity about the unfamiliar human activity within their habitat.

The vocalizations of the Black-capped chickadees are highly complex (Ficken "et al.", 1978). 13 distinct types of vocalizations have been classified, many of which are complex and can communicate different types of information. Chickadees' complex vocalizations are likely an evolutionary adaptation to their habitat: they live and feed in dense vegetation, and even when the flock is close together, individual birds tend to be out of each others' visual range.

The song of the Black-capped is a simple, clear whistle of two notes, identical in rhythm, the first roughly a third above the second. This is distinguished from the 's four-note call "fee-bee fee-bay"; the lower notes are nearly identical but the higher "fee" notes are omitted, making the Black-capped song like "bee bay".

The males only sing the song when in relative isolation from other chickadees (including their mates). In late summer, some young birds will sing only a single note. Both sexes sometimes make a faint version of the song, and this appears to be used when feeding young.

The most familiar call is the familiar "chick-a-dee-dee-dee" which gave this bird its name. This simple-sounding call is astonishingly complex. It has been observed to consist of up to four distinct units which can be arranged in different patterns to communicate information about threats from predators and coordination of group movement. Recent study of the call shows that the number of "dee"s indicates the level of threat from nearby predators. An analysis of over 5,000 alarm calls from chickadees, it was found that alarm calls triggered by small, dangerous raptors had a shorter interval between "chick" and "dee" and tended to have extra "dee"s, usually averaging four instead of two. In one case, a warning call about a , a prime threat to chickadees, contained 23 "dee"s (Templeton "et al.", 2005). The makes a similar call which is faster and higher-pitched.

There are a number of other calls and sounds that these Chickadees make, such as a "gargle" noise which is usually used by males to indicate a threat of attacking another male, often when feeding. This call is also used in sexual contexts. This noise is among the most complex of the calls, containing 2-9 of 14 distinct notes in one population that was studied.

These birds hop along tree branches searching for food, sometimes hanging upside down or hovering; they may make short flights to catch insects in the air. Insects form a large part of their diet, especially in summer; seeds and berries become important in winter. Black oil sunflower seeds are quickly taken from an urban bird feeder. They sometimes hammer seeds on a tree or shrub to open them; they also will store seeds for later use.

The Black-capped Chickadee nests in a hole in a tree; the pair excavates the nest, using a natural cavity or sometimes an old nest. They may interbreed with s or s where their ranges overlap.

*This is the provincial bird of and the state bird of and .
*A Canadian children's magazine also goes by the name "Chickadee".
*"" was one of ' most well-known and often-used catchphrases.