The tits, chickadees, and titmice constitute Paridae, a large family of small passerine birds which occur in the northern hemisphere and Africa. Most were formerly classified in the genus Parus.

These birds are called either "chickadees" (onomatopoeic, derived from their distinctive "chick-a dee dee dee" alarm call) or "titmice" in North America, and just "tits" in the rest of the English-speaking world. The name titmouse is recorded from the 14th century, composed of the Old English name for the bird, mase (Proto-Germanic *maison, German Meise) and tit, denoting something small. The spelling was influenced by mouse in the 16th century. Emigrants to New Zealand presumably identified some of the superficially similar birds of the genus Petroica of the family Petroicidae, the Australian robins, as members of the tit family, giving them the title Tomtit although, in fact, they are not related.

These birds are mainly small stocky woodland species with short stout bills. Some have crests. They range in length from 10 to 22 centimetres. They are adaptable birds, with a mixed diet including seeds and insects.[1] Many species will live around human habitation and come readily to bird feeders for nuts or seed, and learn to take other foods. In Britain, Great Tits and Blue Tits famously learned to break open the foil caps sealing bottles of milk that had been delivered to homes to get at the cream floating on top.

These are hole-nesting birds, typically using trees, although some species build nests on the ground. They lay anything from three to nineteen speckled white eggs, depending on species.[1]

With the exception of the three monotypic genera Sylviparus, Melanochlora and Pseudopodoces, the tits are extremely similar in appearance, and have been described as "one of the most conservative avian families in terms of general morphology".[2] The typical length of the family is between 10–16 cm (3.9–6.3 in) in length, when the monotypic genera are added this range is from 9–21 cm (3.5–8.3 in). In weight the family ranges from 5–49 g (0.18–1.7 oz), this contracts to 7–29 g (0.25–1.0 oz) when the three atypical genera are removed. The majority of the variation within the family comes in plumage, and particularly colour.[3]

The bills of the tits are generally short, and vary between stout and fine dependent on diet. The more insectivorous species have finer bills, whereas those that consume more seeds have stouter bills. The most aberrant bill of the family is possessed by the Hume's Ground Tit, which is long and decurved.[3]

Like all titmice, the Tufted Titmouse is restricted to North America

The tits are a widespread family of birds, occurring over most of Europe, Asia, North America and Africa. The genus Poecile occurs from Europe through Asia into North America, as far south as southern Mexico. American species in this genus are known as chickadees. Some species in this genus have quite large natural distributions, one, the Siberian Tit, is distributed from Scandinavia to Alaska and Canada. The majority of the tits in the genus Periparus are found in the south eastern portion of Asia. This includes two species endemic to the Philippines. The Coal Tit, also in this genus, is a much more widespread species, ranging from the British Isles and North Africa to Japan. The two crested tits of the genus Lophophanes have a disjunct distribution, with one species occurring in Europe and the other in central Asia.[3]

The titmice (genus Baeolophus) are unique to America. The biggest genus, Parus has numerous species found in Africa, several in southern and eastern Asia, and one, the Great Tit, which ranges from Western Europe to Indonesia. Cyanistes has a European and Asian distribution (also nudging into northern Africa), and the three remaining genera, Pseudopodoces, Sylviparus and Melanochlora are all restricted to Asia.[3]

The tits are active, noisy and social birds. The tits also have a variety of methods for attracting mates, primarily through their intricate, bouncing mating dance. They are territorial during the breeding season and often joining mixed-species feeding flocks during the non-breeding season. The tits are highly adaptable and, after the corvids (crows and jays) and parrots, amongst the most intelligent of all birds.[3]

A Great Tit calling in Finland.

The tits make a variety of calls and songs. They are amongst the most vocal of all birds, calling continuously in most situations, so much so that they are only ever silent for specific reasons such as avoiding predators or when intruding on a rival's territory. Quiet contact calls are made while feeding to facilitate cohesion with others in their social group.[3] Other calls are used for signalling alarm—the most famous of which is the "Chic-a-dee-dee" of North American species in the genus Poecile, the call which gives them their local common name, the chickadee. The call also serves a rallying call to summon others to mob and harass the predator. It has been demonstrated through experiments that the number of "dee" syllables at the end of the call increases with the level of danger the predator poses.[4] 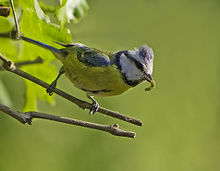 The tits are generalist insectivores that consume a wide range of small insects and other invertebrates, particularly small defoliating caterpillars. They also consume seeds and nuts, particularly in the winter. One characteristic method of foraging in the family is hanging, where they will inspect a branch or twig and leaves from all angles while hanging upside down to feed.[3] In areas where numerous species of tit coexist different species will forage in different parts of the tree, their niche determined in no small way by their morphology; larger species forage on the ground, medium sized species foraging on larger branches and the smallest species on the ends of branches. Having obtained larger prey items or seeds tits will engage in hold-hammering, where they will hold the item with one foot and hammer it with the bill until it is open. In this fashion they can even open hazelnuts in around 20 minutes. A number of genera engage in food caching, hoarding supplies of food during the winter.[5] These caches are usually of seeds but may be of insects as well. 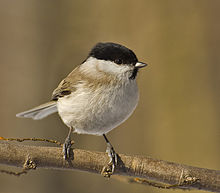 The Marsh Tit was once placed in the genus Parus but has now been moved to the genus Poecile.

Recently, the large Parus group has been gradually split into several genera (as indicated below), which has been pioneered by North American ornithological authorities and to a more limited degree (as of now) elsewhere. Whereas in the mid-1990s, only Pseudopodoces, Baeolophus, Melanochlora and Sylviparus were considered well-supported by the available data as distinct from Parus.[6] Today, this arrangement is considered paraphyletic as indicated by mtDNA cytochrome b sequence analysis and Parus is best restricted to the Parus major—Parus fasciiventer clade, and even the latter species' closest relatives might be considered a distinct genus.[7]

In the Sibley-Ahlquist taxonomy, the Paridae family is much enlarged to include related groups such as the Penduline tits and Long-tailed tits, but while the former are quite close to the titmice indeed and could conceivably be included in that family together with the stenostirid "warblers", the long-tailed tits are not. Indeed, the Yellow-browed Tit and the Sultan Tit are possibly more distant to the tits than the penduline tits are.[7][8] If the two current families are lumped into the Paridae, the tits would be a subfamily Parinae.

Alternatively, all tits—save the two monotypic genera discussed in the preceding section and possibly Cyanistes, but including Hume's Ground Tit—could be lumped in Parus. In any case, four major clades of "typical" tits can be recognized: the dark-capped chickadees and their relatives (Poecile including Sittiparus), the long-crested Baeolophus and Lophophanes species, the usually tufted, white-cheeked Periparus (including Pardaliparus) with more subdued coloration and finally Parus sensu stricto (including Melaniparus and Macholophus). Still, the interrelationship of these as well as the relationships of many species within the clades are not well resolved at all; analysis of morphology and biogeography probably gives more a robust picture than the available molecular data.[7]

Tits have settled North America twice, probably at some time during the Early-Mid Pliocene. The first were the ancestors of Baeolophus; chickadees arrived somewhat later.[7] 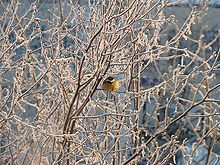 Tit in a winter tree

These two monotypic genera are possibly less close to titmice than are the penduline tits.