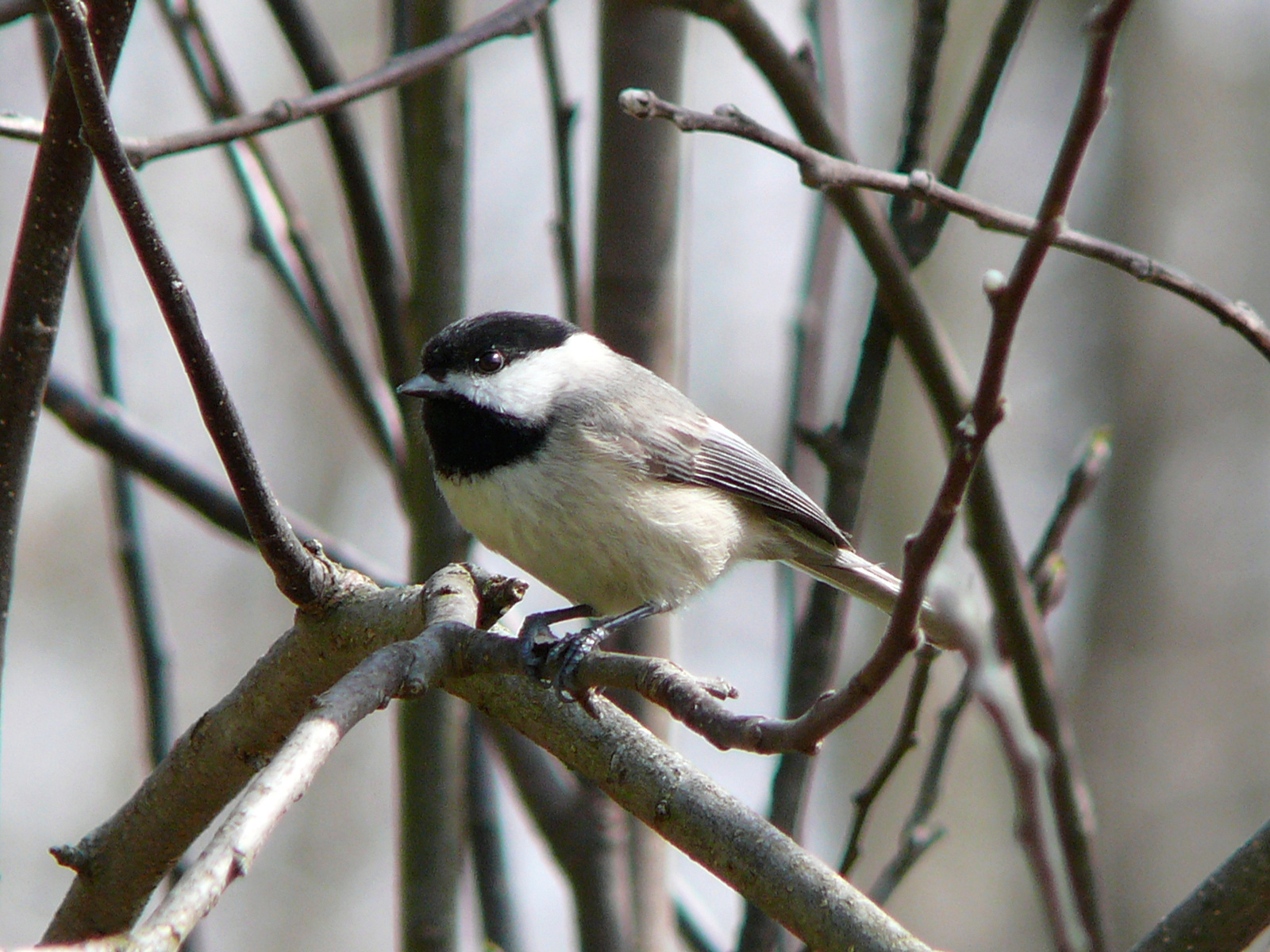 The Carolina Chickadee, "Poecile carolinensis", is a small , a in the tit family Paridae. Often, it is still placed in the genus "Parus" with most other tits, but cytochrome "b" sequence data and morphology suggest that separating "Poecile" more adequately expresses these birds' relationships (Gill "et al.", 2005). The has been treating "Poecile" as distinct genus for some time already.

Adults are 11.5–13 cm long with a weight of 9–12 g, and have a black cap and bib with white sides to the face. Their underparts are white with rusty brown on the flanks; their back is grey. They have a short dark bill, short wings and a moderately long tail. Very similar to the , the Carolina Chickadee is best told from it by the slightly browner wing with the greater coverts brown (not whitish fringed) and the white fringing on the secondary feathers slightly less conspicuous; the tail is also slightly shorter and more square-ended. The calls and song also differ subtly to an experienced ear: the Carolina Chickadee's "chick-a-dee" call is faster and higher pitched than that of the Black-Capped Chickadee, and the Carolina chickadee has a four note "fee-bee-fee-bay" song, whereas the Black-capped omits the high notes. Identification is very difficult even with an excellent view.

The most famous call is the familiar "chick-a-dee-dee-dee" which gave this bird its name and its song is fee-bee-fee-bay.

Their breeding habitat is mixed or woods in the from west to southern and south to and ; there is a gap in the range at high altitudes in the where they are replaced by their otherwise more northern relative, the Black-capped Chickadee. They nest in a hole in a tree; the pair excavates the nest, using a natural cavity or sometimes an old nest. They may interbreed with Black-capped Chickadees where the ranges overlap, which can make identification difficult.

They are permanent residents, not usually moving south even in severe winter weather.

These birds hop along tree branches searching for food, sometimes hanging upside down or hovering; they may make short flights to catch insects in the air. Insects form a large part of their diet, especially in summer; seeds and berries become important in winter. They sometimes hammer seeds on a tree or shrub to open them; they also will store seeds for later use.

During the fall migration and winter, chickadees often flock together. Many other species of birds, including , , and warblers can often be found foraging in these flocks. Mixed flocks stay together because the chickadees call out whenever they find a good source of food. This calling out forms cohesion for the group, allowing the other birds to find food more efficiently.

Carolina chickadees are able to lower their body temperatures to induce an intentional state of called . They do this to conserve energy during extremely cold winters. In extremely cold weather conditions they look for cavities where they can hide in and spend up to fifteen hours at a time in torpor; during this time they are awake but unresponsive; they should not be picked up and handled at this time, as the stress of being held may cause their death.