Raymond Everett Reach, Jr. (born August 3, 1948)[1] is an American pianist, vocalist and educator residing in Birmingham, Alabama, now serving as Director of Student Jazz Programs for the Alabama Jazz Hall of Fame, director of the Alabama Jazz Hall of Fame All-Stars and President and CEO of Ray Reach Music[2] and Magic City Music Productions.[3] In addition, he is an accomplished guitarist, arranger, composer, conductor and music producer. Although he has composed, arranged and performed in a variety of genre (including classical, pop, R & B, gospel, contemporary Christian and jazz), he is perhaps best known for his work in the jazz idiom, combining straight-ahead jazz piano stylings with Sinatra-style vocals.[4] Like many male jazz vocalists, such as Frank Sinatra, Tony Bennett, Vic Damone, Mel Torme, Harry Connick, Jr. and Michael Bublé, Ray's repertoire centers around the classic popular standards and jazz standards of the Great American Songbook. However, Ray differs from many of his jazz vocal colleagues in the fact that he does most of his own arrangements and accompanies himself on the piano.

Born in Birmingham, Alabama, Ray is the only child of Erma Elizabeth Hillman (a beautician) and Raymond Everett Reach, Sr. (a coal miner). Reach began piano lessons at age 6, studying with Giula Williams of E. E. Forbes and Sons Piano Company in Birmingham. Later, he studied piano with Carolyn Pfau and Hugh Thomas at the Birmingham Conservatory of Music.[5] Ray attended Minor High School[6] near Birmingham, Alabama, Birmingham-Southern College, the University of Montevallo and the University of Alabama, among others. At Birmingham-Southern, Ray studied voice with renowned New York City Opera baritone Andrew Gainey,[7] and studied piano with Sam Howard of the concert piano duo, Hodgens and Howard.[8] At the University of Alabama (1977–1980), he served as graduate assistant to noted jazz educator Steve Sample, Sr, directing the award winning Jazz Ensemble B, and playing piano in and arranging for Jazz Ensemble A. During his time at the University of Alabama, ASCAP presented Ray with the Raymond Hubbell Musical Scholarship, for his contributions to jazz and popular music in America.

Ray has been an active jazz educator since the early 1970s. While attending Birmingham-Southern College, he created a series of jazz workshops which were hosted by the music department. He has taught jazz courses and computer music (MIDI) courses and workshops at numerous colleges, including Cedar Valley College in Dallas, Texas, Birmingham-Southern College, the University of Montevallo, the University of Alabama, the University of North Texas and others. In the late 1970s, Ray was chosen by noted jazz educator Steve Sample, Sr to be the first ever graduate teaching assistant in the jazz program at the University of Alabama. From 1998 to 2005, Ray was instructor of jazz and music technology at the University of Alabama at Birmingham (UAB) and director of the UAB Jazz Ensemble.[9] He is currently (2005 to present) Director of Student Jazz Programs for the Alabama Jazz Hall of Fame (AJHoF). As part of his duties at AJHoF, he directs the Alabama Jazz hall of Fame Student All-Star Band. He has also served as a faculty member of the W. C. Handy Jazz Camp, and is a regular featured performer at the W. C. Handy Music Festival and a member of the W. C. Handy Jazz All-Stars. In addition, Reach directs the Fun With Jazz Educational Program, which was originated through the Alys Stephens Center for the Performing Arts, and is now offered through the Alabama Jazz Hall of Fame.

Ray has been involved with synthesizers (and later) computer-produced music since 1969, when he purchased his first Mini Moog. With the advent of MIDI, he worked in research and development for Systems Design Associates, Inc. of Dallas, Texas, makers of MIDI music software. Later, he co-founded the American MIDI Users Group (AMUG), which was based at the Dallas Infomart.

As a jazz educator, Ray has taught a number of notable musicians, including: 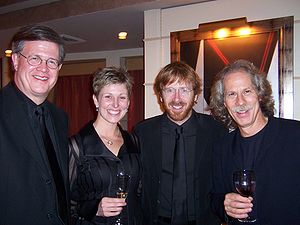 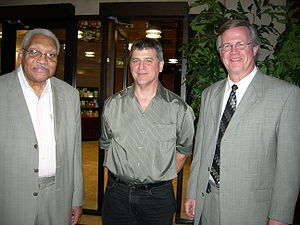 Left to Right: Ellis Marsalis, John Nuckols and Ray Reach, after a concert at the Alys Stephens Center in Birmingham, Alabama, November 4, 2007. 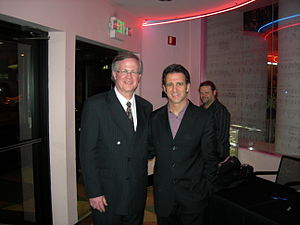 Ray Reach and Eric Marienthal, after a concert at the Alabama Jazz Hall of Fame in Birmingham, Alabama.

Ray has been a singer all his life, and has been an active choral conductor for more than 35 years. His first public performance was at age four, singing a spiritual song at his home church, Minor United Methodist, near Birmingham. His love for choral music began at Dixie Junior High School, where he sang in the choir under Tom Pinion, and later at Minor High School, under John Fowler. He began formal voice lessons at age 15 with Andrew Gainey at Birmingham-Southern College and later entered Birmingham-Southern as a voice major, planning to pursue a career as a professional singer. To this day, Ray refers to his singing, among the many musical skills he possesses, as the "...best thing he does musically..."[1]

Ray has taught choral music in schools in Dallas, Texas and in the Birmingham, Alabama area. In the Birmingham area, he was choral director at Minor High School (1991–1993) and at Montevallo and Calera High Schools (1993–1994). His high school choral groups won "superior" ratings (the highest award) at every county and state choral competition in which they participated.

In 2000, Ray participated in the premier performance of a new jazz mass called "Requiem for the Millennium," by composer Gary Hallquist. The piece was commissioned by the New Orleans Baptist Theological Seminary, and was given its debut performance on Good Friday at St. Louis Cathedral in New Orleans. The piece was performed by a 200 voice choir, accompanied by the Louisiana Philharmonic Orchestra, and featured the Lou Marini Jazz Quartet, with Marini on woodwinds, Robert Dickson on bass, Steve Sample, Jr on drums and Ray Reach on piano.

Ray has written arrangements for numerous choral ensembles, including the Dallas Symphony Chorus, the choirs of Shades Mountain Baptist Church[34] in Birmingham, Alabama, the jazz vocal group Ladies' Night Out[35] and the Hilltop Singers of Birmingham-Southern College. In the gospel and contemporary Christian music world, Ray has written arrangements for artists such as Jonathan Butler, Anetta Nunn[36] and the group Joylight, the resident ensemble at Community Church in Dallas, Texas. Reach contributed arrangements to Butler's 2007 CD and DVD, which was titled "Gospel Goes Classical," and rose to number 2 on the Billboard Gospel charts, and number 3 on the Classical Crossover charts nationally. The recording, produced by Henry Panion, featured Butler, along with Juanita Bynum, a 100+ voice gospel choir and full symphony orchestra, recorded at the Alys Stephens Center.

Ray has done arrangements and transcriptions for many classical artists and orchestras. Orchestras and other classical ensembles he has written for include the Birmingham Metropolitan Orchestra (which featured members of the Alabama Symphony), the Gospel Goes Classical Orchestra, the Dallas Symphony, the Fort Worth Symphony, the Arkansas Symphony Orchestra, the Charleston Symphony and the Huntsville (Alabama) Symphony. Other ensembles and artists who have commissioned his arrangements include the Texas Saxophone Quartet, the Texas Baroque Ensemble, the Southern Methodist University Orchestra, and trumpeter Leonard Candelaria.

For several consecutive years, Ray was commissioned to write arrangements for the annual Induction Gala of the Alabama Stage and Screen Hall of Fame. In this period of time, this hall of fame has inducted such luminaries as Truman Capote, Harper Lee, Hugh Martin, Dean Jones, George Lindsey, Fannie Flagg, Talullah Bankhead and others. He has also arranged and music directed productions for Theatre Tuscaloosa, including And The World Goes 'Round and 1776. As a conductor, Ray has been musical director for numerous Broadway-style shows. For example, at Samford University he was musical director for Joseph and the Amazing Technicolor Dreamcoat (by Andrew Lloyd Webber), Into The Woods (by Stephen Sondheim) and the Southeastern premier of Children of Eden (by Stephen Schwartz).

As a composer, Ray has written and arranged five Broadway-style musicals for Birmingham Children's Theatre.[37] These are listed as follows:

In addition, Reach has written an opera titled The Wooden Donkey, and numerous choral compositions.

While living in Dallas, Texas (1983–1991), Ray also wrote and produced commercial jingles and film and video scores, for clients such as United Airlines, Mercedes-Benz, various radio stations and many others. 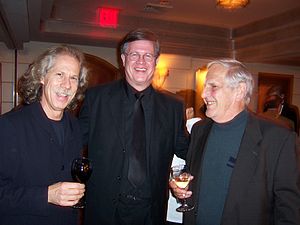 Left to Right: Lou Marini, Ray Reach and the late Ernie Stires at a reception following a Carnegie Hall concert which featured the music of Trey Anastasio and Ernie Stires, 2004.

], Blake English, James Bevelle, John Conner, Jr., Dan Rudin[53] and Barry Beckett[54] (of the famed Muscle Shoals Rhythm Section) and others proved invaluable. His studio experience, along with his knowledge of synthesizers and MIDI technology prepared him well for the classes in music technology which he taught in various venues. His particular combination of musical and technological skills are considered by many of his peers to be rare. One of Ray's primary role models in his production career is noted musician Quincy Jones.[55] 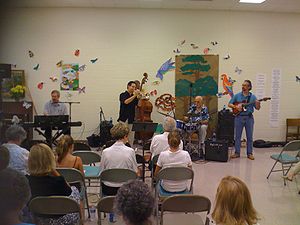 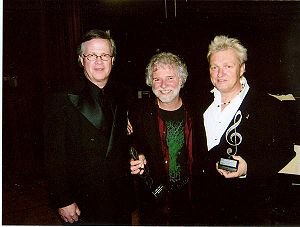 In January 2008, Ray performed as guest artist with the Howard Paul Trio[56] at the famed Jazz Corner[57] on Hilton Head Island, South Carolina.

From July 20 through July 26, 2008, Ray performed at the W. C. Handy Music Festival, alongside noted jazz players such as guitarist Mundell Lowe, drummer Bill Goodwin, trumpeter Ken Watters, guitarist Lloyd Wells and saxophonists Kelley O'Neal and Rick Bell.[61] This was Ray's sixth year to perform at this annual festival, which this year hosted almost 300 events in a 7 day period.

On October 3 and 4, 2008, The Ray Reach Trio appeared before very appreciative crowds at the Jazz Corner in Hilton Head, South Carolina.[64]

On March 28, 2009, in his role as Director of Student Jazz Programs for the Alabama Jazz Hall of Fame, was one of the hosts of the Hall of Fame's 7th Annual Student Jazz Band Festival. This year's guest clinician / performers included pianist Bill Carrothers and saxophonist Eric Marienthal.

March 25–27, 2010, in his role as Director of Student Jazz Programs for the Alabama Jazz Hall of Fame, was one of the hosts of the Hall of Fame's 8th Annual Student Jazz Band Festival. This year's guest clinician was drummer T. S. Monk.

As keyboardist and arranger:

As producer, arranger and keyboardist:

As producer, composer, arranger and conductor:

As keyboardist, arranger and vocalist:

Following the 1989 Dallas production of the "Mr. President" (See listing above), the song was featured on HBO's Comic Relief special. On this show, the song was performed by singers Natalie Cole and Al Jarreau, along with New York City public school choral students and a band led by saxophonist Tom Scott. The show was hosted by Whoopi Goldberg, Robin Williams and Billy Crystal.