Dahomey was a country in west Africa in what is now the Republic of Benin. The Kingdom of Dahomey was a powerful west African state that was founded in the seventeenth century and survived until 1894. From 1894 until 1960 Dahomey was a part of French West Africa. The independent Republic of Dahomey existed from 1960 to 1975. In 1975, the country was re-named "The People's Republic of Benin" after the Bight of Benin (not the unrelated historical Kingdom of Benin) since "Benin," unlike "Dahomey," was deemed politically neutral for all ethnic groups in the state.[2]

Based in his capital of Agbome, Wegbaja and his successors established a highly centralized state with a deep-rooted kingship cult of sacrificial offerings. These included an emphasis on human sacrifices in large numbers, to the ancestors of the monarch. Human sacrifices were not only made in time of war, pestilence, calamity, and on the death of kings and chiefs, they were also made regularly in the Annual Customs, believed to supply deceased kings with a fresh group of servants.

Four thousand Whydahs, for example, were sacrificed when Dahomey conquered the Kingdom of Whydah in 1727. Five hundred were sacrificed for Adanzu II in 1791. Sacrifices for Gezo went on for days. Human sacrifice was usually by beheading, except in the case of the king's wives, who were buried alive. The king directly owned all land and collected taxes from all crops.

Economically, however, Wegbaja and his successors profited mainly from the slave trade and relations with slavers along the coast. As Dahomey's kings embarked on wars to expand their territory, they began using muskets and other firearms traded with French and Spanish slave traders for young men captured in battle, who fetched a very high price from the European slave merchants.

Under King Agadja (ruled 1708-1732), the kingdom conquered Allada, where the ruling family originated. They thus gained direct contact with European slave traders on the coast. Nevertheless, Agadja was unable to defeat the neighbouring kingdom of Oyo, Dahomey's chief rival in the slave trade. By 1730, he became a tributary of Oyo. This required that Dahomey pay heavy taxes, but it otherwise remained mostly independent.

Even as a tributary state, Dahomey continued to expand and flourish because of the slave trade, and later through the export of palm oil from large plantations that emerged. The king's ownership of all land gave him a virtual monopoly on all trade.

As one of West Africa's principal slave states, Dahomey became extremely unpopular with neighboring peoples. The kings of Dahomey sold their war captives into the Transatlantic slave trade, rather than kill them in the Annual Customs.

Historian Walter Rodney estimates that by c.1770, the King of Dahomey earned around £250,000 per year by selling captive Africans to the European slave traders. He spent most of the money on British-made firearms (of poor quality) and industrial-grade alcohol.

The Dahomean state became widely known for its corps of female soldiers. They were organized around the year 1729 to fill out the army and make it look larger in battle, armed only with banners. 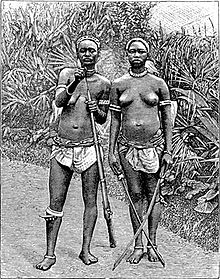 The women reportedly behaved so courageously they became a permanent corps. In the beginning the soldiers were criminals pressed into service rather than being executed. Eventually, however, the corps became respected enough that King Ghezo ordered every family to send him their daughters, with the most fit being chosen as soldiers. Richard Francis Burton commented on the "masculine physique of the women, enabling them to compete with men in enduring toil, hardship and privations," and Alfred Ellis concurred that the female soldiers, "endured all the toil and performed all the hard labour."[3]

The women seem to have in fact considered themselves transformed into men, socially if not physically. At a parade in 1850, in which over 2,000 female soldiers participated, one of them began a speech by saying, "As the blacksmith takes an iron bar and by fire changes its fashion, so we have changed our nature. We are no longer women, we are men."[4] About two-thirds of the soldiers were unmarried, and Burton noted a "...corps of prostitutes kept for the use of the Amazon-soldieresses."[5]

A similar gender switch occurred among some men close to the royal court. Referred to as lagredis, the boys were chosen from among high ranking families and either castrated or given "potions" to feminize them. Richard Burton referred to them as "special slaves of the king, [who] bear the dignified title of royal wives."[6] These lagredis were as entirely dependent on the king as other wives, but seem to have had more freedom of movement. Two of them reportedly accompanied any emissary sent by the king, to serve as royal eyes and ears.[7]

During the 19th century, European nations established colonies in Africa to further exploit resources and expand economic influence. France conquered Dahomey in the Second Franco-Dahomean War (1892–1894), and established a colonial government. Most of the troops who fought against Dahomey were native African. Under French rule, the educated class learned French and the language became widely used. The area is still French-speaking today.

In 1958, Dahomey became an autonomous republic, and gained full independence in 1960. The Republic of Dahomey changed its name to Benin in 1975.

Dahomey was chosen for some of the filming locations in the movie, The Comedians (1967 film), with an all-star cast that included Richard Burton, Elizabeth Taylor, Lillian Gish, James Earl Jones, Roscoe Lee Brown, Alec Guinness, Raymond St. Jacques, Gloria Foster, Zakes Mokae, Paul Ford, Georg Stanford Brown, Peter Ustinov, Douta Seck and Cicely Tyson. The movie is the story of an adulturous affair placed against the backdrop of Haiti during the tumultuous dictatorship of François Duvalier, (known as "Papa Doc"). Dahomey resembled Haiti in many ways, both geographically and culturally, and it was safer to film there than in Haiti.